Graphite is a hexagonal-plate crystal form of carbon. The planar structure is a turtle-shell-shaped  graphene where carbons are connected by strong covalent bonds. Conversely, the layers are connected by weak Van der Waals' forces (Fig.1). Within the plane, electrical conductivity has metal-like properties,  but semiconductor-like character is observed between planes. Graphite is used in many products  including electric devices, automobiles, dry batteries, paint, etc.
Carbon nanotubes and fullerenes can be regarded as deformed graphenes. In addition, by injecting  dopant between graphenes, conductivity can be improved or even develop superconductivity.

Graphite and carbon fiber show a Dysonian absorption ESR line shape which is unique to conductive  materials. Fig. 2 shows the ESR spectrum of a pencil lead. It is believed that the vertically asymmetric  signal is observed because the microwave is affected by amplitude attenuation and the phase changes  from the surface to the lower planes. When the size of sample particle or film thickness is less than the  plane thickness, or when the diffusion time is long and the conductivity is low, this kind of distortion  does not occur. From the ratio of A to B (Fig. 2), the time required for the conduction electrons to go  through the plane can be obtained 4).
Magnetic Field(mT)

Fig 2. ESR Spectrum of Pencil Lead (200 °C)
The g-value and line width (ΔH), theoretical analysis has been conducted based on the electronic  structure of graphite 5).

Pencil lead (4B) was set in a test tube and its ESR spectrum was measured whilst the temperature was raised from  －100 °C to  200 °C (ES-DVT4 was used). As the temperature of the graphite changes, the line width of the ESR spectrum also changes. At low temperature the signal position large shift of the g-value and the increase of line width are characteristic of graphite, and they reflect the band structure near the Fermi potential2). 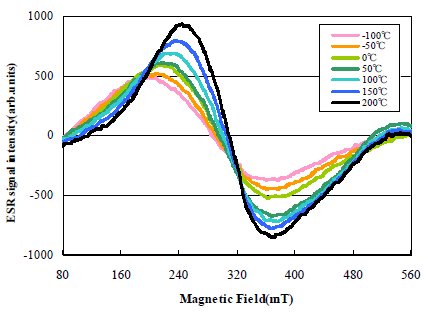 ESR is an important method in evaluating the solid-state properties of materials such as graphite as it gives information on electronic structure and conformation. The existence of Fullerene C60 was shown in 19856).and is basically diamagnetic, but it generates unpaired electrons as it is easily oxidized or reduced to form a radical. The electronic structure and solid-state property of endohedral Fullerenes have been  studied 7,8,9). The ESRs of carbon fiber and multi-layer carbon nanotubes are similar to those of poly-crystalline graphite, and are observed as overlapped signals of different g-values because of  conduction electron and defects. 10)