Fig.1 shows the radical polymerization reaction of vinyl monomer using TMDPO as polymerization initiator. As DPO・ arising from laser decomposition of TMDPO has a very high reactivity, addition reaction proceeds with the monomer.
The starting radical, arising during the initial polymerization process using ethylvinylether as monomer, was measured by ES-CIDEP3 and the result is shown in Fig. 2.
The spectrum when the intensity of the starting radical grows and decays in a very short time scale has been observed. The time resolved ESR spectrum just 2 ms after laser irradiation is shown in Fig. 3. The hfs parameters, ( aP = 6.77 mT, aHα =1.48 mT, aHβ= 1.56 mT, aHγ = 0.18 mT) correspond well with the structure of the starting radical.
As noted above, TR-ESR can be a very useful tool for analysing the reaction in photochemical processes. 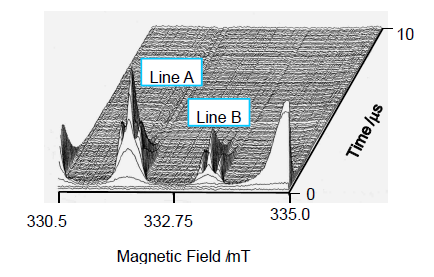 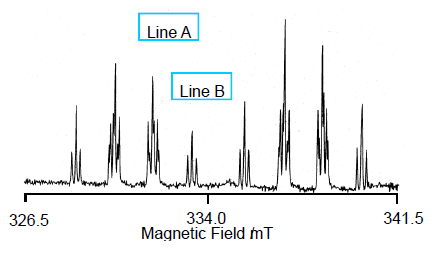