Quartz is a mineral which occurs globally and can be used for ESR dating and gives good information on geological events shown in Table 1. Different types of paramagnetic centers existing in quartz have been reported (1), mainly using the signals from the Al and Ti-Li centers. 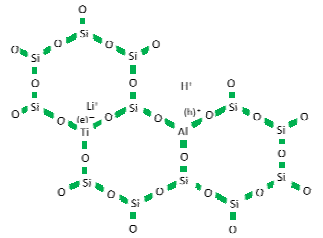 (1) Al Center Signal This impurity in quartz has Al3+substituted at one of the Si4+ positions. Normally, a monovalent cation (M+ = H+, Li+, Na+) is located between the lattices near the Al3+ to form [AlO4-/M+] so compensating for the charge difference. By irradiation, a hole is generated. Then Al3+ captures the hole (h) to make [AlO4/ h] 0 and, at the same time, the cation diffuses between the lattices. The hole is captured by the non-bonding 2p orbital of oxygen near the substituted Al (2)(3). This gives rise to the Al (I＝5/2) center signal which, at 77K shows hyperfine coupling. (Fig. 2)

(2) Ti Center SignalThis impurity in quartz has Ti4+ substituted at one of the Si4+ positions. The Ti captures electrons generated by irradiation ([TiO4+e-]-) and a monovalent cation (M+ = H+, Li+, Na+) to compensate for the charge difference. When the counter-cation is Li+, this was named the Ti center, but other centres, e.g. Ti-H and Ti-Na centers, have also been found in natural quartz (5).

Measurement methods for ESR dating require reagents which have known spin concentrations such as Mn2+ and DPPH (diphenylpicrylhydrazyl).   For Al & Ti-Li centers, the signal intensity, i.e. the peak height (Fig 2), is measured and corrected by the gain, divided by the weight, and normalized by the signal intensity of the Mn marker.  In order to reduce the angular dependency for micro crystalline substances, it is recommended to make several measurements rotating the tube ～ 30° each time. The mean or average value is used for the signal intensity.
For the calculation method, please refer to "Application Note ER-080001". 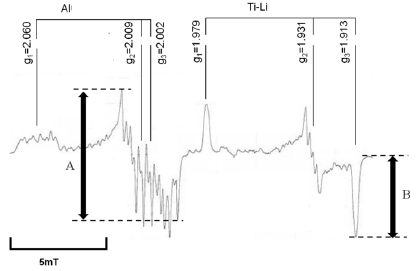