Alumina is widely used as an industry important multi functional material. For example, α-Alumina is used as a single crystalline substrate for electric devices, and γ-Alumina is as a heterogeneous catalyst support. Amorphous alumina are also used in various fields, such as supports for catalytic nano-particles, gate microelectronic devices, rotective films, and surface coating material for lithium-ion battery electrodes because of their excellent chemical resistance and physical properties. However, their detailed structures, particularly local structures around Al atoms, have not been known compared with crystalline alumina.
27Al solid state NMR plays an important role for structural analyses of amorphous alumina because it can determine the fractions of AlO4, AlO5, and AlO6 polyhedral units regardless of the structures, such as crystal and amorphous.
In the application note, we introduce an analysis case example of 27Al solid state NMR for anodic porous-type amorphous alumina films. [1]

Anodic amorphous alumina films are formed on aluminum substrates by applying voltage current to an aluminum anode in an electrolyte. Samples used in the application note is alumina films with several tens nm diameters of porous. 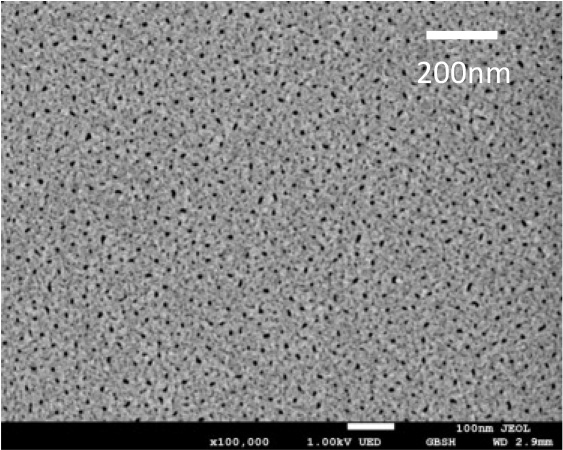 A SEM image of the surface of the anodic film prepared in H2SO4 electrolyte. 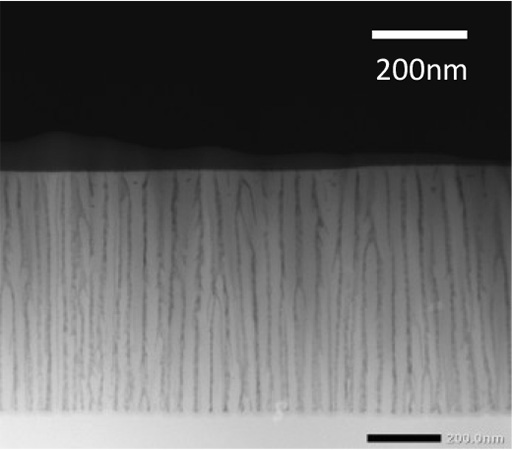 A TEM image of the cross-section of the anodic film prepared in H2SO4 electrolyte.

The shown figure is 27Al solid state NMR spectra for the anodic film prepared in H2SO4 and heated samples. The as-prepared sample shows three peaks originated from 4, 5 , and 6-fold oxygen-coordianated aluminum atoms. Containing large amount of AlO5 is a property of amorphous alumina. The film keeps amorphous structure until 800℃ heating. At 1000℃ the sample changed to Ƴ-alumina which contains [4]Al and [6]Al, and at 1300℃, to α-alumina formed only by [6]Al. 27Al solid state NMR provides the fractions of [4]Al, [5]Al, and [6]Al polyhedral units regardless of crystal and amorphous.

The 1H−27Al CPMAS measurement can selectively detect the coordination environment around aluminum atoms existing near hydrogen atoms. That is, in the case of anodic alumina films, the CPMAS spectra mainly provide information about aluminum atoms near hydrogen atoms of physisorbed water. The spectra before and after heating (the right figure) showed decrease in [6]Al and increase in [4]Al and [5]Al by heating process. This reveals that a majority of [6]Al exists near surface-physisorbed water, i.e., at the outermost surface of the cell wall, and these changed to [4]Al and [5]Al with decreasing in physisorbed water by heating.
The 1H−27Al CPMAS spectral signals were still detected for the heated samples even though we expected them to have almost no physisorbed water. The appearance of these signals presumably indicates that a tiny amount of hydroxyl groups remains inside the samples.