A Japanese lacquer film called "Urushi" is a natural polymer that has been used as a paint and adhesive for living-wares and craft-wares for approximately 8,000 years. "Urushi" has a complex structure that researchers are trying to understand using pyrolysis-gas chromatograph/mass spectrometer (Py/GC/MS) system. Recently, we developed a new gas chromatograph/high resolution time-of-flight mass spectrometer (GC/HR-TOFMS) system that can be used for comprehensive two-dimensional GC (GCxGC) measurements. Additionally, we have developed a unique combination electron ionization/photoionization (EI/PI) ion source that can be used with this GC/HR-TOFMS system. In this work, we measured "Urushi" samples using this unique Py/GCxGC/HR-TOFMS system in combination with our new combination EI/PI ion source.

In this study, we initially checked the thermal decomposition temperature for the Japanese lacquer film. Urushiols were observed as the main component in the lacquer film at 400°C. However, the thermal decomposition components indicating the lacquer film were observed at much higher levels at 500°C. As a result, we decided to use 500°C as the decomposition temperature for the GCxGC/EI and GCxGC/PI measurements.
GCxGC is a powerful chromatographic separation technique that provides both boiling point and polar separations simultaneously during a single sample measurement. We detected main components "Urushiols" in both EI and PI data. We also observed approximately 1,000 compounds in the lacquer sample using an automatic peak search function for the GCxGC/EI data. Additionally, this data showed several easily identifiable compound series such as hydrocarbons, carboxylic acids, aromatic ketones, alkyl phenols.

A 2-dimentional extracted ion chromatogram (GCxGC EIC) was constructed for m/z 123.044 (C7H7O2), which is a common fragment ion for the alkyl catechols (R-C6H3(OH)2). This 2D-EIC allowed us to easily identify two series of compounds that included the Alkyl catechols and Alkyl orcinols. In past research, only the 3-saturated alkyl catechols were focused upon during the analyses as the main thermal decomposition compounds for the lacquer film. The Alkyl orcinols were minor components that would co-elute with the 3-saturated alkyl catechols using a regular 1D GC. These compound series have different polarity characteristics so they are separated by the 2nd GC column. Consequently, the GCxGC technique allowed us to easily separate these characteristic compounds from each other.
We also checked PI mass spectra for the main components, i.e., 3-Pentadecyl catechol and 3-Pentadecenyl catechol. The PI mass spectra showed molecular ions for many of the compounds in the sample. PI is a much softer ionization method, so it can be used to obtain molecular ion information for target compound analyses. 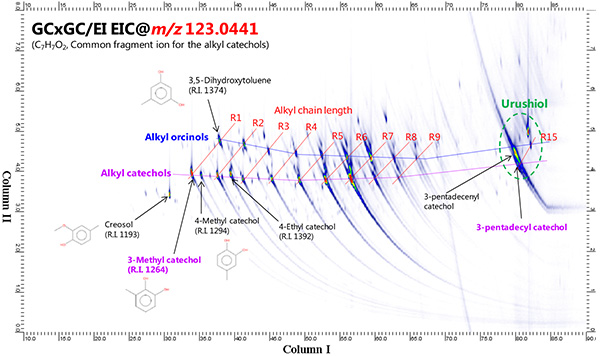