In the Application Note ER-150004, an evaluation of the thermal degradation of heat-resistant polyamide-imide (PAI) resin was described. The response to transient thermal loads was investigated by increasing the temperature of the resin in steps and taking measurements. This time, we introduce a study of the changes in the radical species during the thermal degradation process, using PAI with a different thermal response in the low temperature range.

The assessment was performed as follows:

The results are shown in Figures 1 and 2. As previously reported, PAI contains 2 species of radicals even at room temperature (-CO· and nitrogen-derived radicals). The -CO· radical increases when the material is heated.
The Mn marker seen in both figures was the same amount, but the intensity of the signal is smaller in Figure 2. This means that a larger amount of radicals were generated at 350°C. After heating to 200°C, the radical content returned to nearly the initial levels after cooling. After heating to 350°C, however, the radical content remained significantly higher than the initial levels, even after cooling. This reveals that heating PAI to 350°C causes new, relatively stable radicals to be generated.
The g-value for the main radicals was 2.004 (C-O·) both before heating and for the heating to 200°C. This changed to g = 2.003 (C·) as a result of heating to 350℃. The observed changes in the g-value indicate that the resin has been denatured. 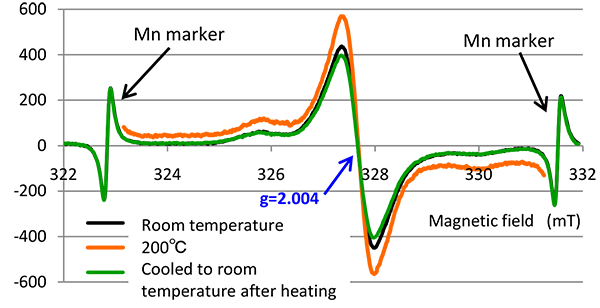 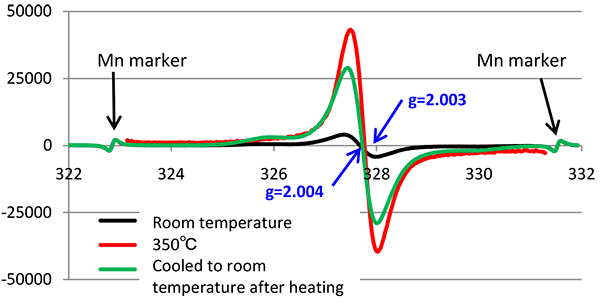