During the assessment of thermal degradation of heat resistant polyamide-imide(PAI) resin reported in Application Note ER-170004, changes in the radical species in the resin were observed. Here, we report on a study of the radical response during repeated heating cycles of this PAI resin.

The assessment was conducted as follows. 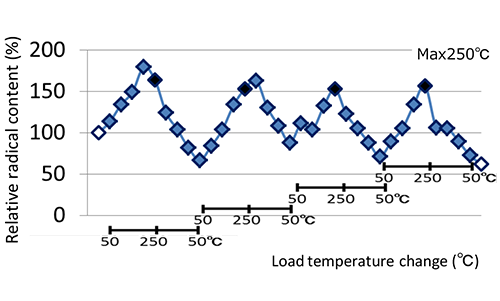 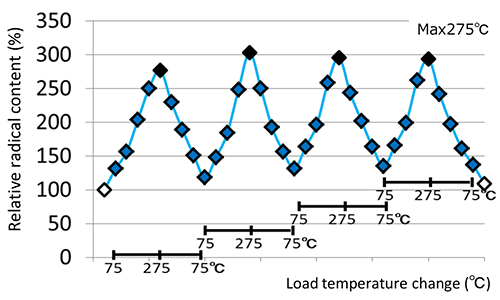 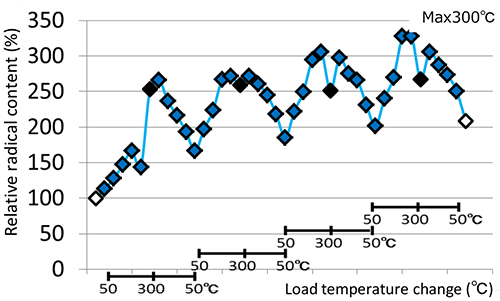 The radical species observed with the PAI resin used this time were the same as in the previous study.
The total radical amount was determined from the spectrum obtained for each temperature step, and the changes observed for each different maximum temperature are shown in Figures 1 to 3. The vertical axis is the relative amount with the total amount before temperature increase taken as 100%. It was confirmed that there was a difference in the change in amount of the radicals corresponding to the repeated raising and lowering of the temperature.

The results shown in the figures are an example, but for all measurements, a temperature-dependent increase in total radical content was sequentially observed from the initial temperature increase.
In each series, the total amount of radicals repeatedly increased and decreased as the temperature increase and decrease cycle was repeated; but, the increase with each repetition of the cycle was more noticeable for the higher maximum temperatures. Furthermore, a difference in the radical quantity when cooled back to 50°C that was correlated with the maximum temperature was observed. Radicals decreased at the heat-resistance temperature of 250°C, but increased at higher temperatures in a temperature-dependent manner. This is regarded as evidence of the accuracy of the stated heat resistance temperature of this resin.
This kind of in-situ measurement at such high temperatures should be useful for evaluating many resins. We propose a combination of the 400°C-VT with an ESR for such studies.