Industrial materials are often evaluated by surface analysis instruments that provide information on surface elements, bonding states, and functional groups. However, there are limited options for surface analysis techniques that provide molecular weight and molecular structure information for organic compounds present on surfaces. Matrix Assisted Laser Desorption Ionization - Time of Flight Mass Spectrometry (MALDI-TOFMS) is a soft ionization technique that can be used to analyze surfaces in order to estimate elemental compositions with accurate mass measurements, obtain structural information by using MS/MS, and map surface compounds by using MS imaging. MALDI-TOFMS uses a high voltage on the target plate to accelerate the ions into the TOFMS analyzer. Therefore, the target plates are conductive and are typically made of stainless steel. MALDI imaging mass spectrometry is widely used for analyzing organic substances on frozen tissue sections. In this case, a frozen tissue section with a thickness of about 10 μm is placed on a conductive glass slide coated with an indium tin oxide (ITO) film. However, for the analysis of industrial products, the target organic compounds are on nonconductive substrates such as resins with millimeter thicknesses. MALDI-TOFMS surface measurements using nonconductive substrates lead to a reduction in mass resolution and a significant decrease in ion intensity due to surface charging.
This problem can be solved by pretreating the surface with gold vapor deposition in order to change it from nonconductive to conductive. This method was previously shown to work well in MSTips No. 204 in which the gold vapor deposition method was applied to the MALDI-MS imaging analysis of inks on paper. In this report, we used gold vapor deposition to look at samples on the surface of a 1 mm thick acrylic plate.

An acrylic plate with a thickness of 1 mm was used as the nonconductive substrate. Polypropylene glycol (PPG, MW 1000) was used for SpiralTOF and TOF-TOF analyses. PPG 1000 was dissolved in water to 1 mg / mL. Matrix compound α-CHCA and cationization agent NaI were dissolved in methanol at concentrations of 10 mg / mL and 1 mg / mL, respectively. Equal amounts of PPG 1000 solution, matrix solution and cationization agent solution were mixed and then 1 μL was spotted on the acrylic plate and air-dried. For the MS imaging measurement, a red permanent ink was used as the sample, and the letters "MS" were written on the acrylic plate. No matrix compound was applied because rhodamine, a major component of the red permanent ink, can be ionized without using a matrix. After the samples were applied, each surface of the acrylic plate was coated with gold by vapor deposition. Afterwards, the acrylic plate was affixed with conductive tape to a special stainless steel plate that was dug down 1 mm from the normal plate surface position. The target plate was then directly introduced into the JMS-S3000 "SpiralTOF™" for MS analysis.

Fig.1 JMS-S3000 SpiralTOF™ and the plate used for introducing the acrylic plate.

The PPG measurements from the gold vapor deposition acrylic surface showed sodium adduct ions [M + Na]+ for PPG 1000 HO(C3H6O)nH (see Figure 2). A mass resolution of 55000 was obtained for the monoisotopic peak at n = 18 (enlarged in Figure 2).
Afterwards the n = 18 product ion spectrum was acquired by using the TOF-TOF option. Figure 3 (a) shows the mass spectra before and after monoisotopic ion selection of n = 18. Figure 3 (b) shows the product ion spectrum for this ion. The results of the SpiralTOF and TOF-TOF modes are equivalent to those measured using a normal stainless steel target plate. 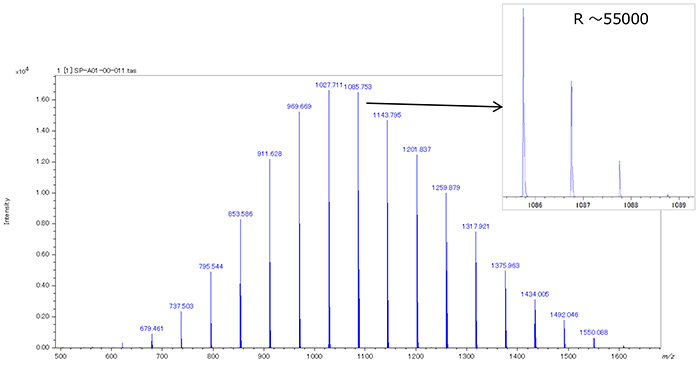 The MS imaging results for the red permanent ink "MS" characters on the acrylic plate are shown in Figure 4. The major component in the mass spectrum was (C28H31N2O3+) which is related to rhodamine (loss of Cl), a major component in red permanent ink. A mass resolution of 48,000 was observed for this data, thus indicating that this kind of measurement can be done on a pretreated nonconductive substrate without any issues. The m/z 443 peak was then used to create a mass image of the surface that clearly showed the "MS" characters in the measurement area. The pixel size for this image was 50 μm, which reflects the laser spot size used during the measurement.