The NMR application for medicinal screening

The merit of the observation of protein – ligand※1 interaction by NMR is that one can observe interaction at equilibrium state between association and dissociation in solution. 1D NMR techniques are useful methods that can be used to reveal the target molecule among candidates of many small compounds.
In this context, they are attracting attention as screening※2 method s of pharmaceutical products.

※1 The ligand is a molecule that specifically binds to a specific receptor (protein).
※2 Screening is select those that show drug efficacy / activity from a large number of candidate compounds.

"Spin diffusion" and "Saturation transfer" are keywords in NMR techniques of protein-ligand interaction.
When certain protein signals are saturated , saturation is diffused to all protein signals. This phenomenon is called Spin diffusion.
Then the effect of diffusion is transferred to the ligand that binds the protein. This is called Saturation Transfer.
The signal intensities of saturated ligand are decreased (other signals are not changed). Schematic explanation of saturation transfer is shown in Fig 1. Saturation transfer is introduced by chemical exchange between protein-bound and protein-free ligand.

In STD experiment, one obtains the difference spectrum between a spectrum with saturation and a spectrum without saturation. As a result, signals that show no intensity change are canceled out and only binding ligand signals remain. In other words, STD spectrum shows only ligand signals with binding activity to protein. A schematic explanation of STD is shown in Fig 2. Red-colored area indicates saturation where signals are not observed or are observed with reduced intensity. 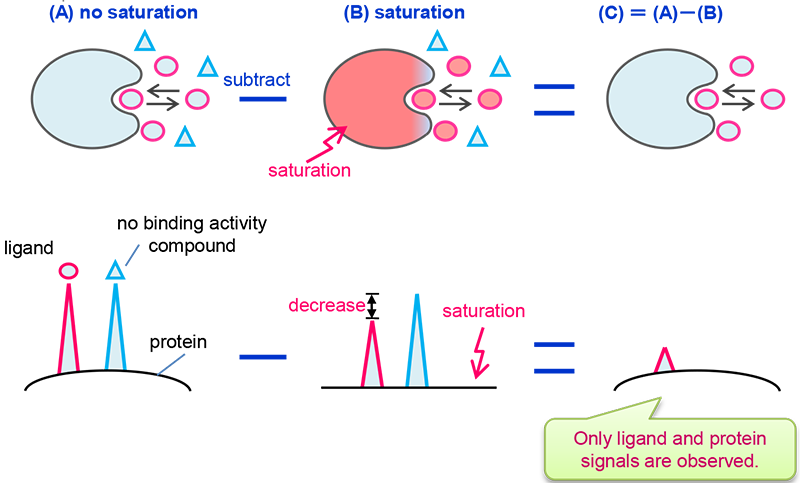 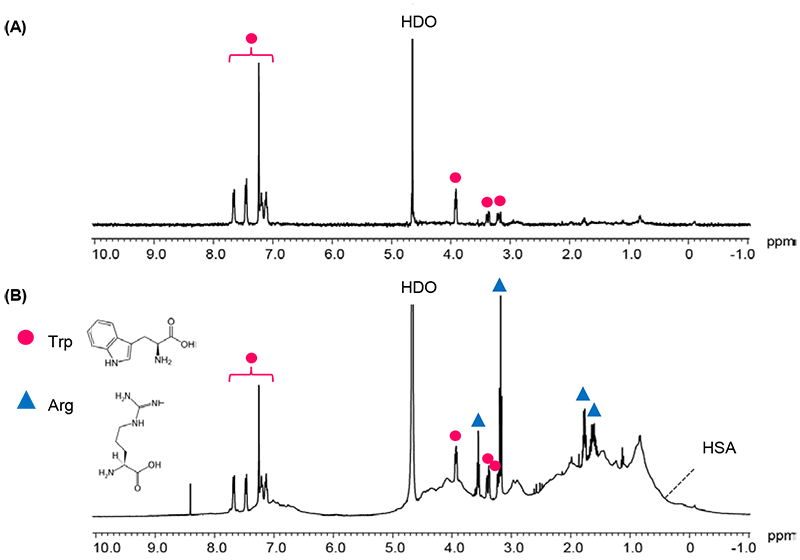 DIRECTION (Difference of Inversion RECovery rates with and without Target IrradiatiON)

DIRECTION※1 is a NMR technique to analyze the protein-ligand interaction by longitudinal relaxation time.
In general, signal strength in the STD spectrum increases proportionately to the strength of interaction with protein. Thus, it’s possible to obtain hints about the part of ligand involved in binding.
However, when ligand’s T1 is short, efficiency of saturation transfer decreases. Therefore, STD spectrum analysis needs to take into consideration the T1 of each ligand signal.
DIRECTION is the experiment that estimates the efficiency of saturation transfer by probing not the signal intensity but directly the T1.
DIRECTION is essentially an inversion recovery experiment where T1 is measured twice with saturation transfer and no saturation transfer.
1H signals from ligands that strongly bind to protein show decreased T1.

In DIRECTION experiment, T1 is measured twice with and without presaturation (Fig.5). Analysis of the changes in 1H’s T1 can identify binding compounds. Protein signals are decreased by T2 filter.

Table 1 shows the results of DIRECTION for a mixture solution of 0.1mM HSA, 2mM L-(+)-Arg, and 2mM L-Trp / D2O. T1 of Arginine which has no binding activity shows no significant change when it is measured with and without saturation. On the other hand, Tryptophan's T1 is significantly decreased. Especially 3.22ppm and 3.24ppm's signals are drastically decreased.