Broccoli sprouts growing in two different environments (w/ light or w/o light) were used as an example for multivariate with two different sample groups. Broccoli seeds were sowed on 1 wt% ager gel. Until 5 days after seeding, they were cultivated without light. From 5 days until 10 days after seeding, half of them were cultivated with light and another half were cultivated without light. Then seedlings were harvested on 10 days after seeding. Polar metabolites in two different sprouts were extracted by a modified Bligh-Dyer method. The extracts were then dried with a centrifugal evaporator. Dried metabolite mixtures were resuspended with the NMR solvent (a 100 mM deuterated potassium phosphate buffer, pH = 7.0). 1H single pulse spectra were recorded and used for further analyses (Figure 1). Eight sample replicates in each sample group were performed.
Bucket integrations were performed on the series of spectra (0.04 ppm width each, between 0.5-9.0 ppm). As a result, the matrix (multivariate for multivariate analyses) consisted of 194 variables * 18 samples were obtained. OPLS-DA and univariate analyses were performed with the “ropls” package in bioconductor (https://www.bioconductor.org/) [1] and “muma” package (https://CRAN.R-project.org/package=muma) [2] in the “R” which is a statistical scripting language.

Figure 1. Series of 1H spectra of polar metabolites in broccoli sprouts cultivated w/ or w/o light. Y range in aromatic region (8.5-5.0 ppm) was scaled with 8 time larger than that in aliphatic region (4.7-0.5 ppm). Eight experimental replicates were performed in each sample group. NMR spectra were recorded continuously on a JNM-ECZ400S spectrometer equipped with a ROYAL probe and ASC30 auto sample changer.

Figure 2. OPLS-DA using 1H NMR spectra of polar metabolites in sprouts growing two different conditions. (a) score plot. (b) S-plot. Normalizing with sum of all variables and Pareto scaling with centering were performed before OPLS-DA.

In this note, OPLS-DA [5], which provides results which are easier to interpret than PLS-DA, was employed (Figure 2). Each sample was normalized using sum of all variables and centering and Pareto scaling were performed on each variable.
In the score plot, sprouts growing w/ light and w/o were clearly discriminated in first T score (Figure 2(a)). A explained variation (R2Y) and predicted variation (Q2Y) were 0.991 and 0.942, respectively. That indicates resultant OPLS model was valid.

S-plot is a scatter plot using covariance (x-axis) and correlation (y-axis) between scores and variables. Therefore metabolites high amount in sprout w/ light are in the first quadrant, and those high in w/o light are in the third quadrant. In the first quadrant, there were natural sugars including glucose and sucrose. In the third quadrant, there were amino acid including glutamine, asparagine, valine. That would reflect autotrophic metabolism in sprout w/ light, meanwhile, in sprout w/o light, energy metabolism depended heavily on providing amino acid from degradation of protein. Note that NMR-MP doesn’t provide any evidence of facts (ex. we are not sure high amino acids in sprout w/o light were actually caused by degradation of proteins). However NMR-MP, data-driven approach, provides some hypothesis (i.e. high amino acids in sprout w/o light would be caused by degradation of proteins for energy recycling). You have to perform verification experiments to confirm the facts. Nonetheless, data-driven approaches such as NMR-MP provide opportunities to find out a new fact which we cannot fined out using a conventional hypothesis-driven approach. 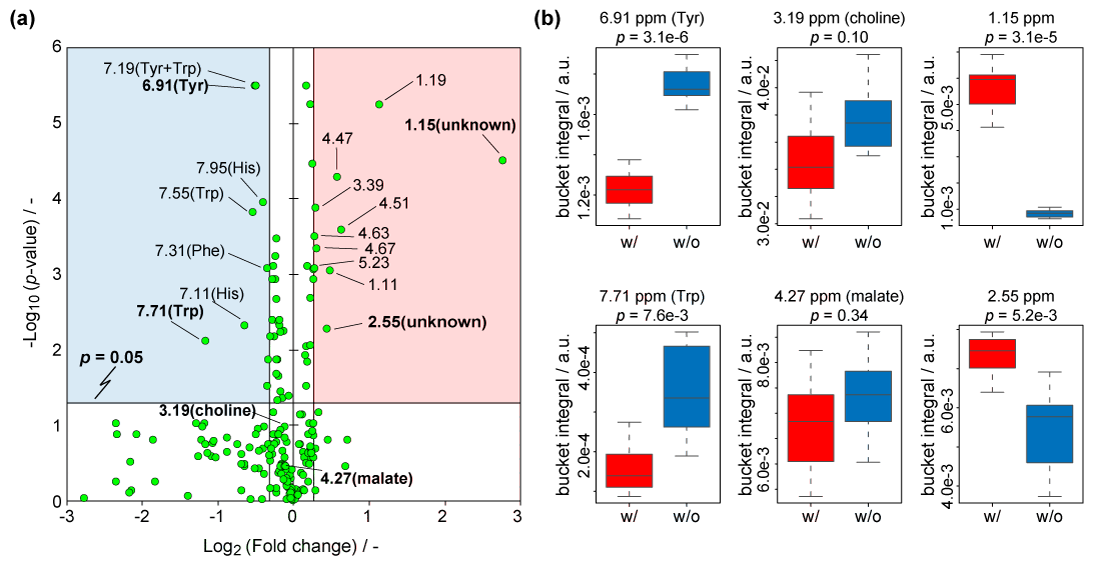 Statistical hypothesis testing for a difference of averages in particular variable between two sample group is typical analysis procedure in modern laboratories. This is referred to as “univariate analysis” contrasted with multivariate analysis. Here the univariate analysis were performed for all variables repeatedly (i.e. multiple comparison). We employed a “Volcano plot” which can visualized multiple univariate analyses comprehensively.
Before hypothesis testing for a difference of averages, Shapiro Wilk’s test was performed to make sure whether each variable was according normal distribution or not. The Welch’s T test was performed on variables according normal distribution, meanwhile the Mann-Whitney’s U test was performed on variables not according normal distribution in the Shapiro Wilk’s test. P-values in two hypothesis test for a difference of averages were adjusted with the Benjamini-Hochberg method (= adjusting false discovery rate) to avoid increasing type I errors by multiple comparison. The adjusted p-values were used in the volcano plot. Methodological details for identify variables having significant difference among sample groups are described in the reference material [6].

While the multiple comparison provides a variable which is significantly higher in particular sample group in each, it is not easy to overview whole results in all variables together. The volcano plot enable that. The volcano plot is a scatter plot in which x- and y-axis represents fold change and p-value of each variable, respectively. Fold changes and p-values are typically shown as log2 and –log10, respectively, for making plots wide spread. As a result, the scatter plot looks like “volcano” (Figure 3(a)). “muma” package in R automatically performs several statistical hypothesis testing, adjusting p-values, making a volcano plot.

Multivariate analysis using sample categories as an objective valuable, as shown in current note, is fruitful to explore maker molecules or built discrimination model. Also univariate analyses with volcano plot is fruitful even for multivariate data. We can perform the same analyses with data with more than three sample groups. Meanwhile regression analyses should be performed with data in which quantitative variables are used as objective variables.