Two kinds of petroleum samples were analyzed by "JMS-T200GC AccuTOFTM GCx-plus", the latest model of JEOL GC-TOFMS (gas chromatograph time-of-ﬂight mass spectrometer) that has high mass resolution and high-speed mass spectra acquisition capabilities combined with the photoionization source and the GC×GC system. Several kinds of biomarkers such as 18-Norabiotane, Cholestane, Hopane, Adamantane, Iceane and Diamantane could be separated and selectively detected by GC×GC and photoionization.

As a result of recent advancement in gas chromatography (hereinafter referred to as "GC") technologies, especially for capillary column technologies, a variety of capillary columns have been developed with different separation capabilities. Furthermore, comprehensive two-dimensional GC (hereinafter referred to as "GC×GC") has been developed using these capillary column capabilities to separate chemical substances that have very complex compositions [1, 2]. GC×GC systems consist of two types of capillary columns with different separation modes connected in series. Additionally, there is a cryo-trap system (thermal modulator) placed between the ﬁrst and second columns to modulate the sample injection into the second column. This two-column system allows GC×GC to use two different separation modes in a single analysis. The components are separated in the first column, cryo-trapped for 5-10 seconds, and then rapidly released by the thermal modulator into the second column which has a narrow inner diameter and short length. This process means that the eluted components from the first column are trapped and released at intervals of 5 to 10 seconds and then are continuously and rapidly separated in the second column. As a result, the two-dimensional chromatogram contains two retention time axes, one for the primary column and one for the secondary column.
In general, quadrupole mass spectrometers (hereinafter referred to as "QMS") are widely used for GC-MS measurements. However, these systems are generally not suitable as a GC×GC detector. As described previously, the second column of the GC×GC system has a unique geometry (narrow diameter and short length) that separates the components very rapidly. This feature results in chromatographically narrow peak widths that require high data-acquisition speeds in order to acquire enough data points across each analyte peak. If a QMS is used, then there are limited data points measured for the second-dimension peaks in the chromatogram, thus resulting in poor quality 2D chromatographic data. Therefore, it is not optimal to use a QMS system as the detector for GC×GC.
To overcome this problem, JEOL developed a gas chromatograph time-of-flight mass spectrometer (hereinafter referred to as GC-TOFMS) with both high mass resolution (R=10,000) and high-speed mass spectral data acquisition (up to 50 Hz) that is optimal for combining with GC×GC. This combination GC×GC-TOFMS system was ﬁrst introduced in 2004 and is widely used for the analysis of various complex samples [3-7]. In this report, we use our 4th generation GC-TOFMS model "JMS-T200GC AccuTOF™ GCx" with an optional photoionization source and GC×GC system to analyze biomarkers in petroleum samples.

A Zoex Corporation ZX2 GC×GC thermal modulator system was used with our GC-TOFMS system. The schematic diagrams of GC×GC thermal modulator was shown in Fig. 1. This modulator unit was placed between the two capillary columns in order to cryo-trap the components eluting from the ﬁrst column using the "cold jet gas" and in order to release them using the "hot jet gas". Since the "hot jet gas" is sprayed for very short period (300-400 msec) with regular interval (5-10 seconds), released components are introduced into the second column each interval regularly, as a result the two-dimensional chromatographic separation is achieved as shown in Fig. 2. 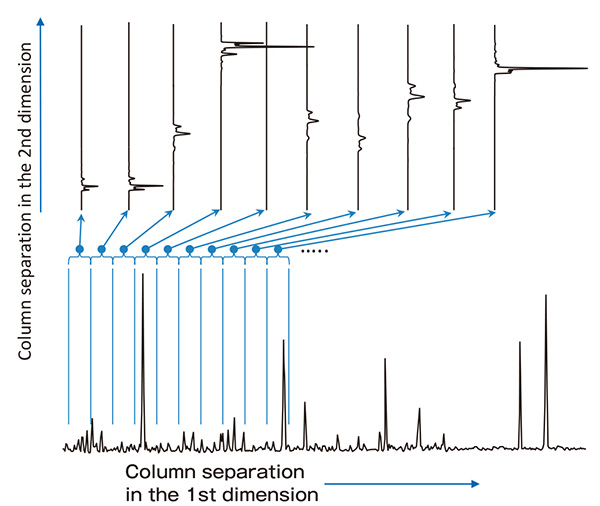 The most commonly used ionization method for GC-MS is Electron Ionization (EI). EI is a hard ionization technique that uses high energy electrons to ionize the analytes, resulting in many fragment ions. These mass spectra can be very useful for chemical structural analysis of target compounds and can be compared to MS search libraries such as the NIST database to help conﬁrm the identity of target compounds. However, the EI spectra can often have low intensity molecular ions, which can make it difficult to estimate the elemental composition from the measured exact mass. As a result, this technique is not always an ideal ionization method for these purposes. Alternatively, soft ionization techniques that use low energy methods to ionize the sample analytes can be used to generate higher intensity molecular ions. In the GC-MS analysis ﬁeld, Chemical Ionization (CI) is the most common soft ionization method available. JEOL offers not only CI but also Field Ionization (FI) and Photoionization (PI) as optional soft ionization methods for the JMS-T200GC.
The PI photon source is a deuterium lamp with radiation wavelengths from 115 to 400 nm. The energy for the smallest wavelength (115 nm) is 10.8 eV which is a good match for the primary ionization energy for typical organic compounds (~10 eV). As a result, this source is suitable for the soft ionization of these types of analytes.
The PI source schematic is shown in Fig. 3. The JEOL PI source is incorporated into the standard EI source, which allows for the unique capability of switching between EI and PI without breaking vacuum. All that is necessary for EI measurements is to turn on the EI filament, and then for PI measurements, simply turn off the EI ﬁlament and turn on the deuterium lamp. 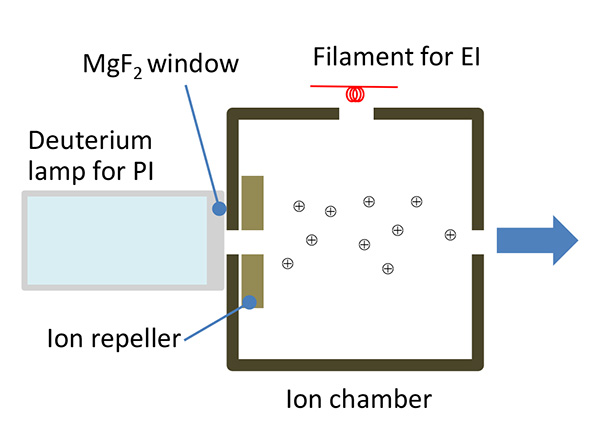 A photo of the external view of JEOL AccuTOF™ GCx along with the schematics for the ion source, ion transfer system and ion optical system are shown in Fig. 4. The compounds eluting from the GC column are ﬁrst ionized in the ion source and then transferred into the TOF analyzer using a low kinetic energy of approximately 30 eV. Afterwards, the ions are measured by using a single-stage reﬂectron TOF analyzer that orthogonally accelerates the ions away from the ion-transfer direction. This type of TOFMS is called an "Orthogonal-Acceleration Time-of-Flight Mass Spectrometer" (oa-TOFMS).
It is worth noting that there are some challenges for using TOF instruments as GC-MS detectors. In particular, helium gas is used as the GC carrier gas which means that the volume of this gas is relatively large compared to the target compounds present in the sample injections. For EI, helium is also ionized and transferred together with the sample ions into the analyzer, thus resulting in a large number of helium ions in the ion beam. These ions can produce large space charging effects (charging, etc.) within the analyzer that can degrade the resolution of the instrument. Additionally, for TOFMS analyzers, these helium ions will reach the detector, resulting in the rapid deterioration of the microchannel plate (MCP). To overcome this problem, the JEOL GC-TOFMS system is innovatively designed so that the ion transfer system removes 99.9% or more of the helium ions produced in the ion source by adjusting the lens balance voltages.

Fig.4 Photo and schematics of JMS-T200GC 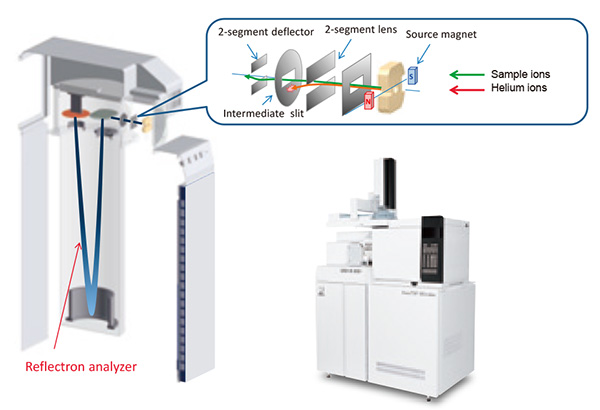 The PI mass spectra for Cholestane and Adamantane, both of which are typical biomarkers, are shown in Fig. 5. The molecular ions M+・ were detected as the base peak for each of these compounds, thus confirming that PI is effective for detecting these biomarker molecular ions.
The 2D TICCs (total ion current chromatograms) for the GC×GC/PI measurements are shown in Fig. 6 and Fig. 7 for each crude oil sample. Both samples contained n-Alkanes (CnH2n+2) and Cycloalkanes (CnH2n+1) along with numerous chemical compounds detected at later secondary column retention times. These compounds were identified as CnH2n-4, CnH2n-6 and CnH2n-8 which have higher degrees of unsaturation than n-Alkanes and Cycloalkanes. Additionally, these two petroleum fraction samples were measured by GC×GC/EI under the same conditions. Based on the library search results for the EI mass spectra corresponding to CnH2n-4, CnH2n-6 and CnH2n-8, Petroleum Fraction A mainly contained the Cholestane polycyclic saturated hydrocarbons while Petroleum Fraction B mainly contained the Adamantene saturated-bridged cyclic hydrocarbons.
Next, high selectivity 2D EICs (Extracted Ion Chromatograms) were constructed for the molecular ions of six chemical compounds that are generally known as biomarkers (Table 2). As shown in Fig. 8 and Fig. 9, 18-Norabietane, Cholestane and Hopane were specifically identified in Petroleum Fraction A, and Adamantane, Iceane and Diamantane were identified in Petroleum Fraction B. Next, the related compounds for these biomarkers were systematically evaluated by creating summed 2D EICs for the CnH2n-4, CnH2n-6 and CnH2n-8 series. The 2D EICs for these series are shown in Fig. 10 and Fig. 11.
These results clearly showed that the biomarkers and their related compounds are present within each petroleum fraction. Since the PI method selectively produces molecular ions for these analytes, a systematic evaluation for the biomarker amounts was achieved by combining the high separation capabilities of GC×GC with the soft ionization of PI and high resolution TOFMS. Additionally, the 2D EICs for the PI measurements made it much easier to interpret the data and correctly assign the biomarker identities in the crude oil samples. 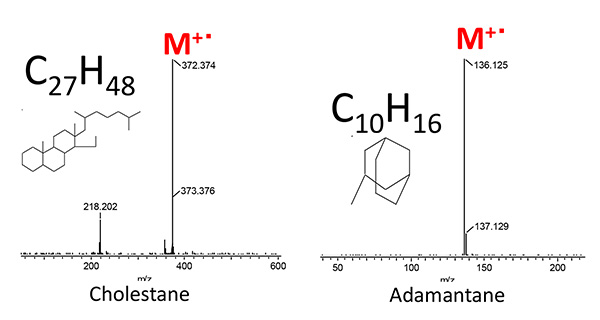 Fig.6 2D TIC of Petroleum fraction A, measured by GC×GC/PI 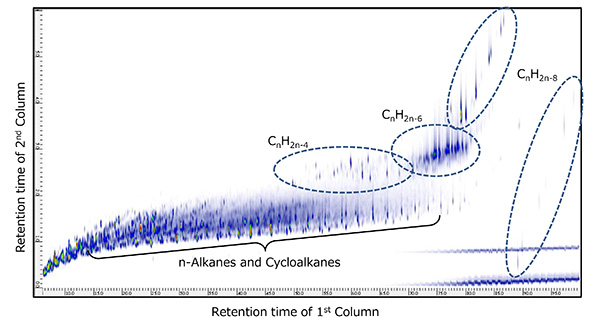 Fig.7 2D TIC of Petroleum fraction B, measured by GC×GC/PI 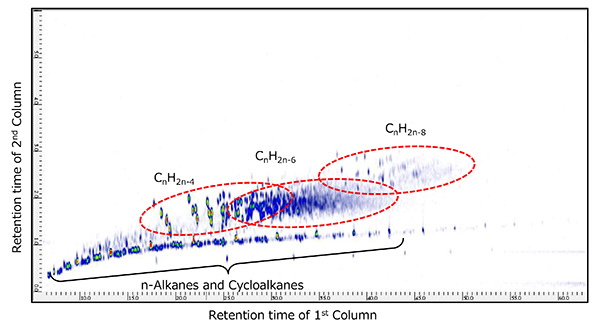 Fig.8 2D EIC of Petroleum fraction A, measured by GC×GC/PI 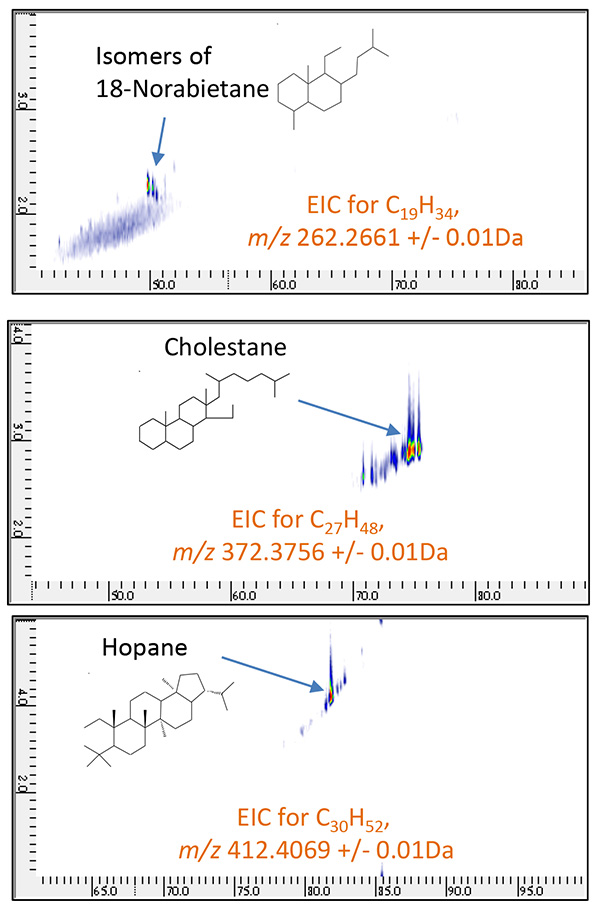 Fig.9 2D EIC of Petroleum fraction B, measured by GC×GC/PI 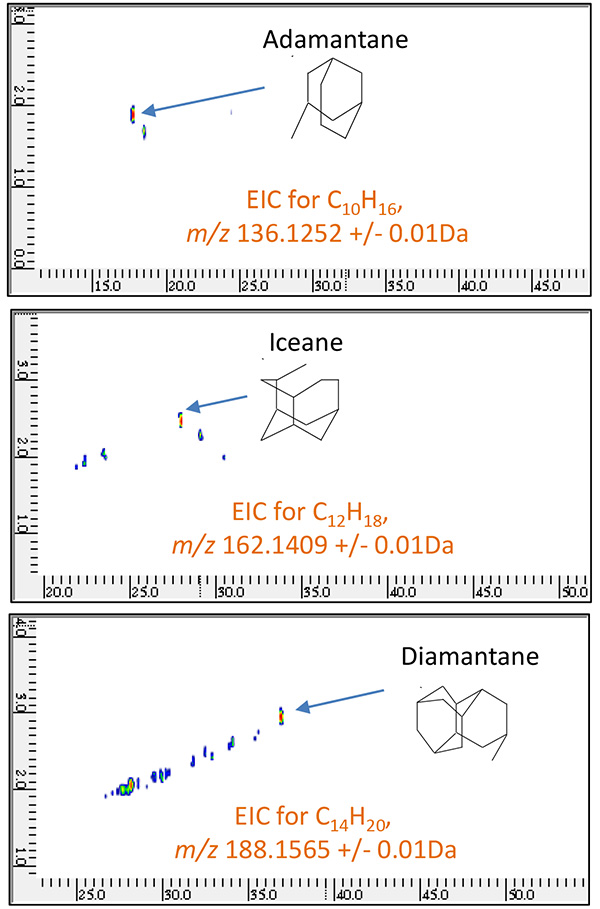 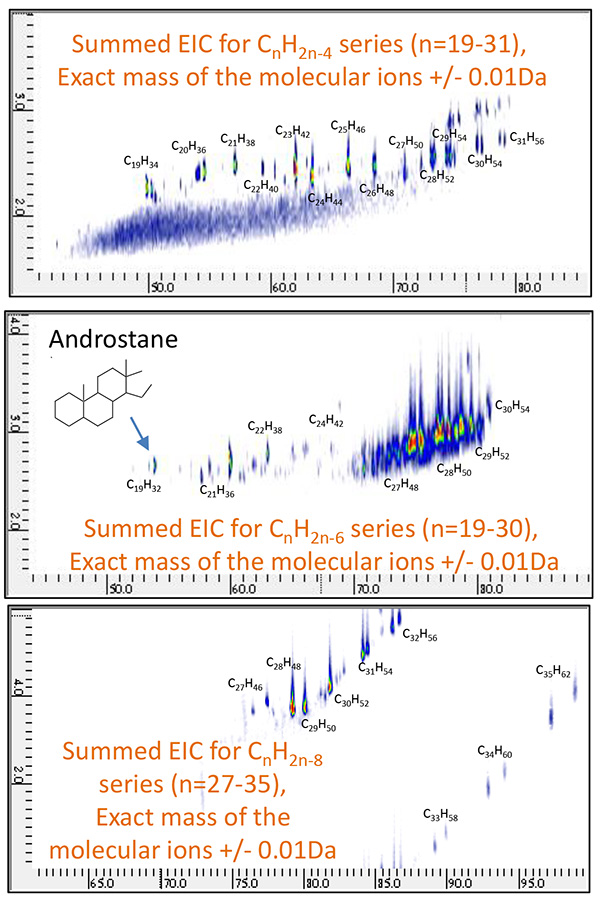 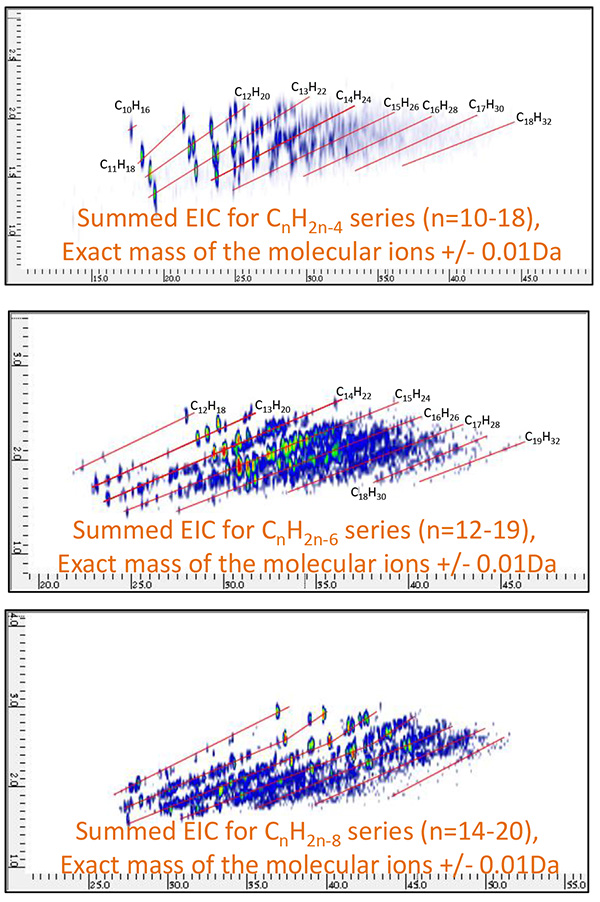 Table 2 Typical biomarkers and "m/z" of their molecular ions

GC×GC is an advanced GC technology that offers dramatically higher chromatographic separation capabilities than that of conventional 1D GC. To maximize the quality of data obtained with this high-separation capability, it is effective to use a TOFMS that offers both high speed data acquisition and high mass resolution in combination with hard ionization and soft ionization methods. The JEOL GC×GC-TOFMS system equipped with the combination EI/PI source accomplishes all of this in a single package.
As reported in this application note, our latest GC×GC-TOFMS in combination with the optional EI/PI source is a very powerful tool for the analysis of complex mixtures like biomarkers in petroleum samples.