Electron ionization (EI) is a hard ionization method that is commonly used with gas chromatography mass spectrometry (GC-MS). The mass spectral fragmentation patterns produced by EI are used for library database searches to identify compounds. Conversely, soft ionization methods like field ionization (FI) tend to produce clear molecular ions with minimal fragmentation. When high-resolution MS is used with these ionization techniques, the accurate masses for the fragment ions produced by EI and the molecular ions produced by soft ionization provide an additional dimension of information for the analytes. Combining the exact mass information with the results of conventional library search can enhance the accuracy of identification compared to the use of library search alone. In this work, we introduce the msFineAnalysis software and use it to automatically combine data acquired by GC/EI and GC/soft ionization for the qualitative analysis of coffee headspace.

A commercial coffee was prepared as follows:
1) One gram of coffee beans was loaded into a 22 mL vial, 15 mL of boiling water was added, and the vial was sealed.
2) After the sample was cooled to room temperature, 10 mL of the supernatant was loaded into another vial, and 2 µL of an internal reference (p-Bromofluorobenzene) solution was added to the sample.
3) Finally, 2 mL of the above solution was transferred to the vail for the headspace sampler and sealed in a vial that was then used as a sample.
Table 1 shows the measurement conditions used for the headspace/GC-TOFMS system.

Figure 1 shows the operational flow chart for the integrated analysis steps used for the JEOL msFineAnalysis software (chart on the right). First, the data is acquired by using both EI and soft ionization (SI), and all peaks and associated mass spectra are detected in the chromatograms. Afterwards, the mass spectra produced by these ionization methods are linked using their retention times, and these linked mass spectra are recorded as single components. Next, the EI mass spectrum is used for the library database search (1), and the SI mass spectrum is used to identify the analyte molecular ion (2). Afterwards, the molecular ion is used for exact mass analysis to determine possible elemental compositions, and these candidate formulas are then filtered by using the EI library search results (3). Next, the molecular ion is subjected to isotopic pattern analysis to help further limit the candidate formulas (4). Each candidate formula is then used as a search constraint for the exact mass analysis of the EI fragment ions (5). If the molecular ion formula candidate is incorrect, the EI fragment ions will not result in many (if any) compositional formulas, thus indicating that the molecular ion formula is not a good candidate for that particular analyte. These results are then output as an integrated qualitative report (6). 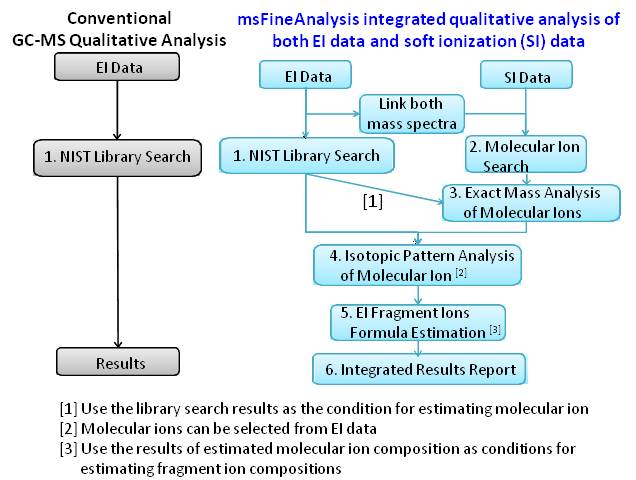 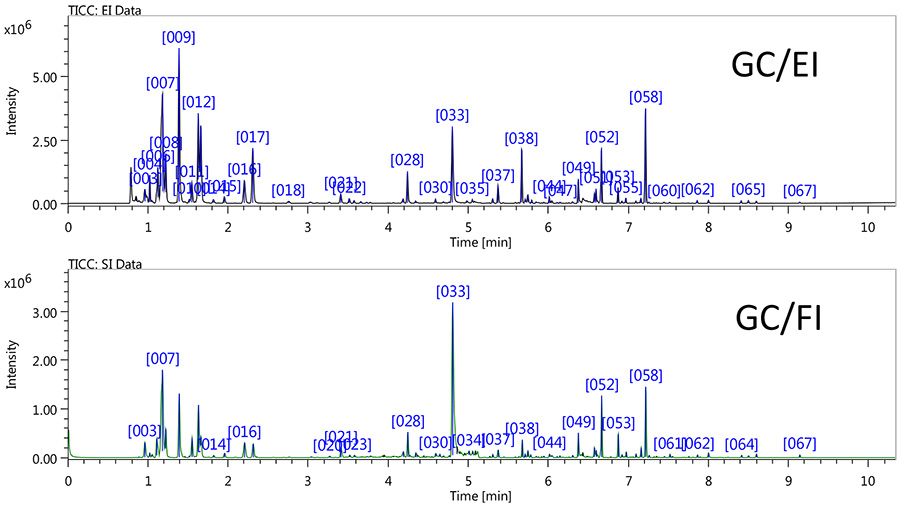 Figure 2. TIC chromatograms of coffee aroma acquired by a HS/GC/TOFMS 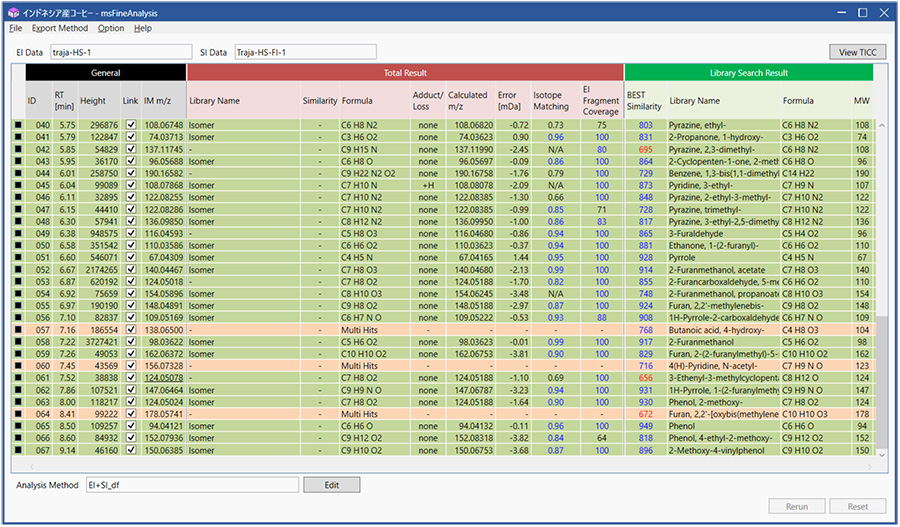 The msFineAnalysis software produces highly accurate qualitative analysis results by automatically combining the EI library search results and soft ionization (SI) molecular formula determinations. Additionally, this software makes it possible to determine molecular formulas for unknown components not registered in library (match factor score: low), which can not be identified by database search alone (Figure 1, left side). The effectiveness of the msFineAnalysis integrated analysis method effectiveness for GC/MS qualitative analysis was demonstrated by automatically determining molecular formulas from exact masses, regardless of the level of match factor score, to limit the candidate formulas.