CRAFT for Delta Ver. 1.1 —Introduction of background and its user interface—

CRAFT (Complete Reduction to Amplitude Frequency Table) [1], the new concept of high-resolution NMR data processing based on the Bayesian analysis [2], is able to convert NMR time domain data (FID; Free Induction Decay) into amplitude and frequency table for each component in the sample(Figure 1). Traditionally quantitative information is extracted from NMR data by Fourier transforming the date with phase correction, baseline correction, etc.. and then integrating the date. CRAFT is a potential alternative approach to the conventional procedures.
CRAFT user interface has been implemented in the Delta NMR software Ver. 5.3.1. In this note JEOL introduces, the background and user interface of CRAFT for Delta Ver. 1.1 with Delta Ver. 5.3.1. 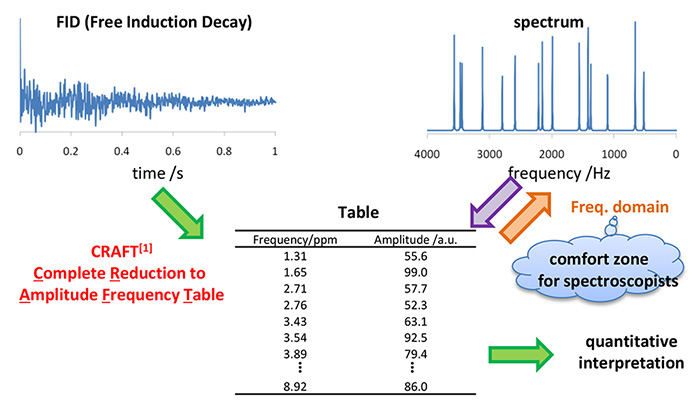 Figure 1. CRAFT data flow. CRAFT directly converts FID into a table consisting of frequency and amplitude for each frequency component. CRAFT and Delta reconstruct the spectrum for visual inspection.

"FID to Table" workflow in CRAFT is shown in Figure 2. First, CRAFT employs digital filtering to divide whole FID into sub-FIDs (i.e.convert whole FID into a series of small FIDs with fewer frequency components). And then Bayesian analysis developed by G.L. Bretthorst [2] is applied to each of the sub-FIDs. CRAFT uses multiple exponentially decaying sinusoids (Lorentzian line shape) to model the FID. The Bayesian analysis estimates frequency, amplitude, decay rate, and phase for each frequency component (= exponentially decaying sinusoid). CRAFT estimates number of frequency components in each sub-FIDs producing a robust CRAFT result unlike conventional spectral deconvolution approaches in which the starting conditions including number of frequency components, overlap, and digital resolution strongly influence results. Frequency components are summarized based on segment settings (described later) and finally a table for all components is generated.
The Fourier transform of a decaying exponential function is a Lorentzian (Figure 3). Where the amplitude of the exponentially decaying sinusoid corresponds to the Lorentzian peak integral area. This allows the use of the amplitude as quantitative information from CRAFT.
CRAFT processing provides a "reconstructed spectrum" as well as a table. The spectrum is only for visual inspection of how well "CRAFT worked" because it’s difficult for users to grasp the quality of the result from just a table of numbers. The residual between experimental and CRAFT reconstructed data is also shown in the interface as frequency data. This provides the user an additional check of how well CRAFT modeled experimental data. 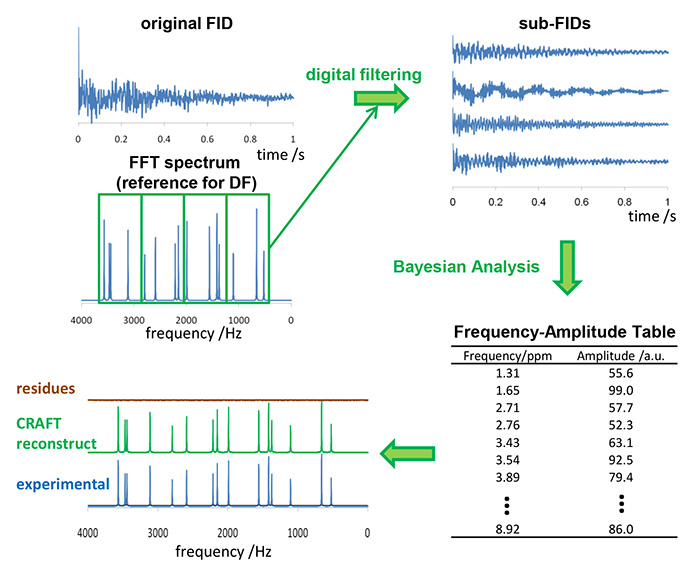 Figure 2. Workflow of CRAFT. FID is converted into sub-FIDs via digital filtering. A table is generated by use of the Bayesian analysis.

A simple to use CRAFT user interface has been implemented in Delta NMR software Ver. 5.3.1 (this is referred to as CRAFT for Delta Ver. 1.1). Frequencies and amplitudes of each segment are reported as a table after frequency components are summarized as segments. Here parameter for segment setting is "Segment width". Concept of segment is described later.
Example of CRAFT analysis is shown in Figure 4 using 1H-NMR spectrum of indometacin. Segment width of 5 Hz is used here (Figure 4(a)). Results of the CRAFT analysis is shown in Figure 4(b). The table is shown in the right side, and CRAFT reconstructed spectrum (green), experimental spectrum (blue), residual (brown, = difference between green and blue) are shown on the left side. The small residual spectrum confirms that CRAFT produced an excellent model of the experimental data.
A segment is a sub-spectral window within the frequency range of the entire spectrum. Frequency components within a segment are summarized as one segment. This concept is necessary for multiplets due to spin-spin coupling. Our interest is in the amplitude of multiplet bundle and not the amplitude of each Lorentzian. Groups of frequency components become one segment if their frequency difference is less than "segment width". 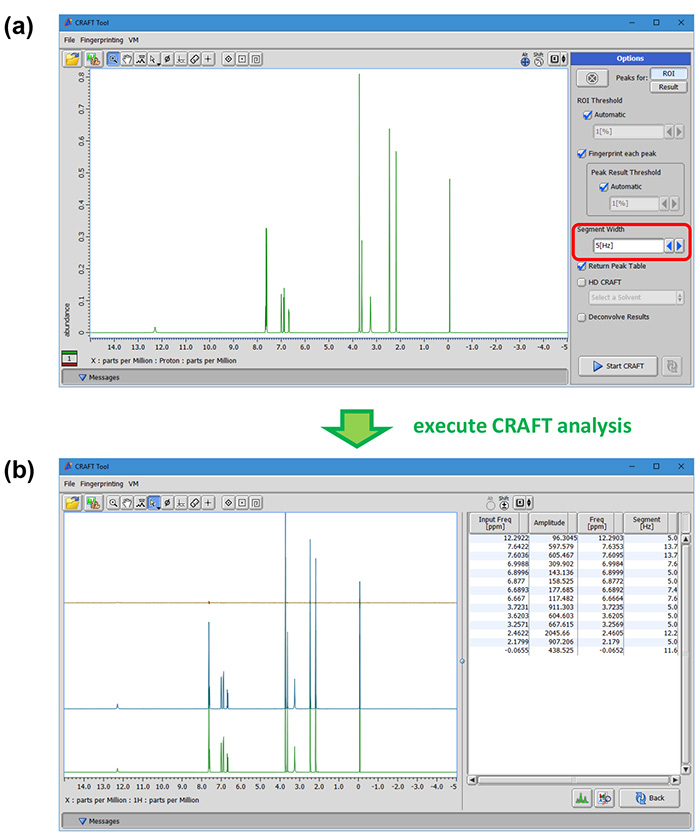 Figure 4. User interface of CRAFT for Delta Ver. 1.1. (a) Here segment width of 5 Hz is used. (b) Table of components is shown on the right side, and CRAFT reconstructed spectrum (green), experimental spectrum (blue), residual (brown, = difference between green and blue) are shown on the left side.

An user can predefine and arbitrary number of segment ranges and assign names to the segments. This is referred to as "fingerprint" and is a powerful tool when assigning each multiplet to an analyte and group of spins. An example of CRAFT analysis with fingerprint setting is shown in Figure 5 using mixture of amino acids (glycine (Gly), arginine (Arg), alanine (Ala), trimethylsilyl propanoic aicd (TSP)). Here fingerprints (segments with assignment of analyte and spin) are set before executing CRAFT analysis (Figure 5(a)). Results of the CRAFT with fingerprint setting are shown in Figure 5(b). The resulting table can be directly used for assignment and quantitation because each segment is based on the fingerprint for that compound. The fingerprint function is a powerful tool for extracting quantitative NMR information from NMR spectra of mixtures. 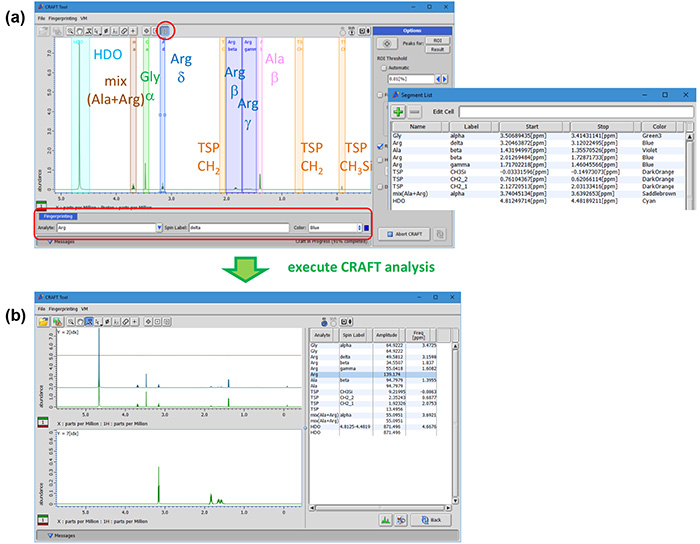 Figure 5. The fingerprint function in the CRAFT for Delta Ver. 1.1. (a) A user defines segments and their assignment of analyte and spin before CRAFT analysis. (b) CRAFT provides table based on the user defined fingerprints.