High molecular weight polymers are often MS-silent due to their inherent high dispersity (ĐM) or detected in the high mass range with low resolving power. An "on-plate" alkaline degradation has thus been developed as a sample pre-treatment on the MALDI target with tenths of ng of polymer to cut long industrial polyester chains into short oligomers amenable to MALDI-HRMS [1]. The complicated mass spectrum of P3HB oligomers was analyzed by fraction base Kendrick mass defect (KMD) plot [2]. Fraction base KMD analysis has been developed from the regular KMD analysis to modify the aspect and separation capabilities of the KMD plots depending on a divisor (noted X) in addition to the base unit (noted R) via a fraction base R/X [3].

Poly(3-hydroxybutyrate) (P3HB, Mn = 2.6 × 105 g mol-1, ĐM=2.7) was from Sigma-Aldrich (St. Louis, MO,USA). All other chemicals and solvents were from FUJIFILM Wako Pure Chemical Corporation (Osaka, Japan) unless otherwise mentioned. 1 μL of P3HB in THF at 1 mg mL-1 was drop-casted on a disposable MALDI target plate (Hudson Surface Technology, New Jersey, USA) to form a polymer thin layer. 1 μL of sodium hydroxide in methanol (10 mg mL-1) was deposited on the sample layer and left to air-dry for 5 min. The excess amount of alkaline reagent was washed with distilled water. After drying, 1 μL of 2,4,6-trihydroxyacetophenone (THAP, Protea Biosciences, West Virginia, USA) in THF (20 mg mL-1) was applied on the sample spot as matrix. Mass spectra were recorded with a JMS-S3000 SpiralTOF™ mass spectrometer. Plots were computed using msRepeatFinder 3.0 from the peak list exported using msTornado™.

Intense ion series of P3HB oligomers are observed in MALDI-MS (Fig. 1A). Six main series varying by their end-groups are detected (Fig. 1B) but assigning and visualizing all congeners remains time-consuming and poorly intuitive. 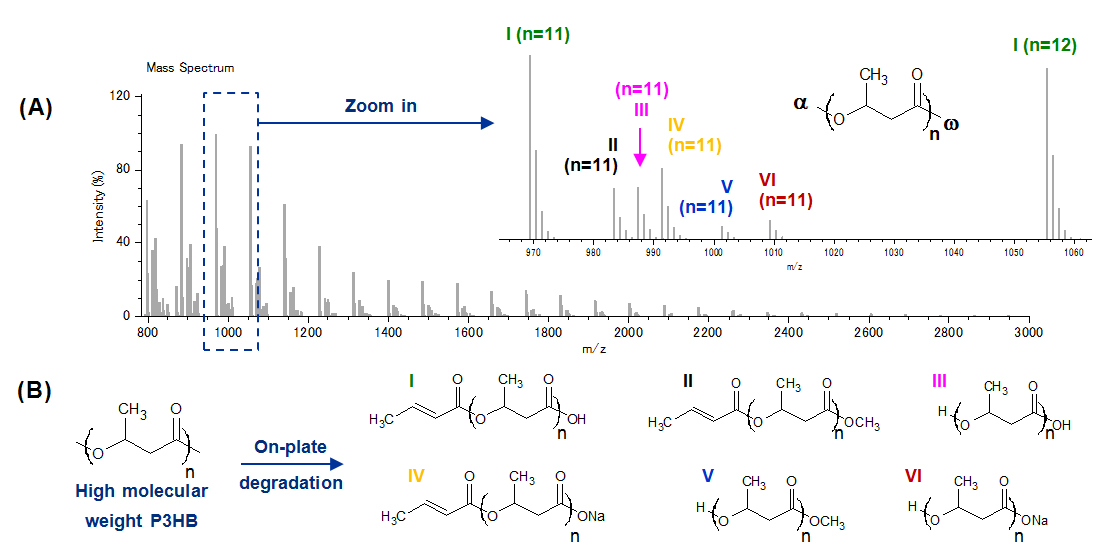 The regular KMD plot computed from the MALDI mass spectrum displays a cloud of points aligned horizontally (Fig. 2A). Zooming in is mandatory as the points are clustered within a restricted portion of the plot due to a very limited change of KMD with the variation of isotope or end-group composition [4]. Two poorly resolved groups of points are seen (Fig. 2B) while six series are expected considering the mass spectral data. 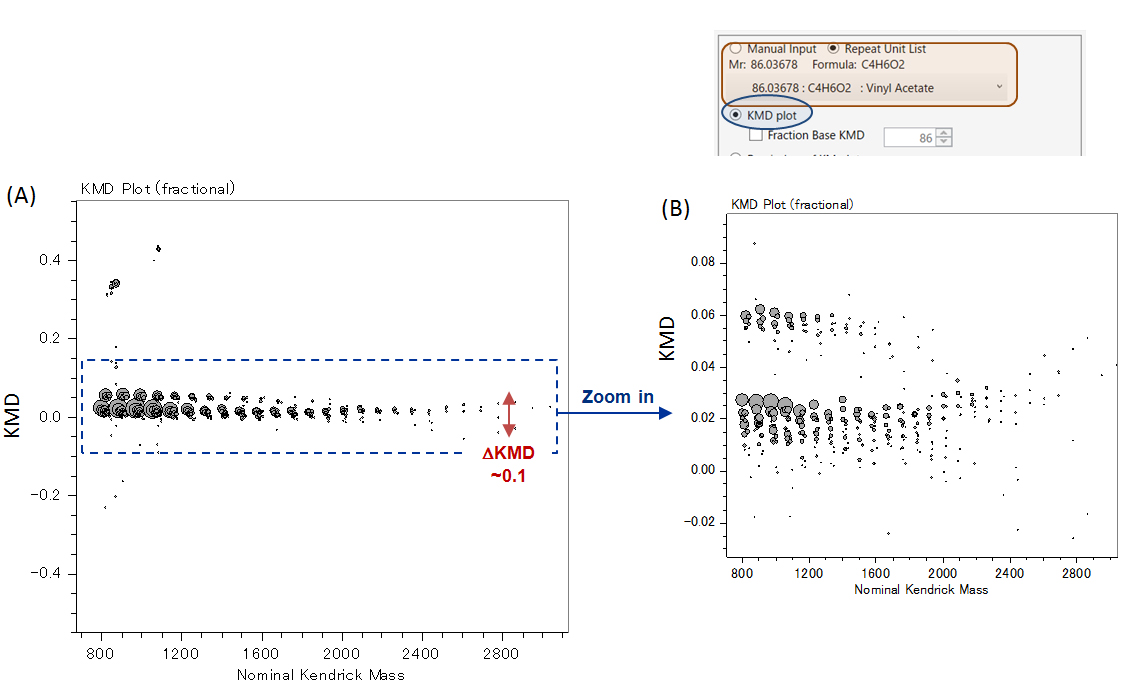 Fig. 2. Full-scale regular KMD plot from the mass spectrum of P3HB with C4H6O2 as base unit using msRepeatFinder.

Activating the "Fraction Base KMD" option in msRepeatFinder and decreasing the value of X from 86 (regular KMD plot) to 85, the resolution-enhanced KMD plot greatly separates the six P3HB series at full scale thanks to a greater variation of KMD by the change of composition (Fig. 3A). Decreasing X of one unit at X=84, the resolution-enhanced KMD plot additionally resolves the isotopic patterns (1st line: 12C, 2nd line: 13C1, …) and discriminates the six series even better (Fig. 3B, X=84). 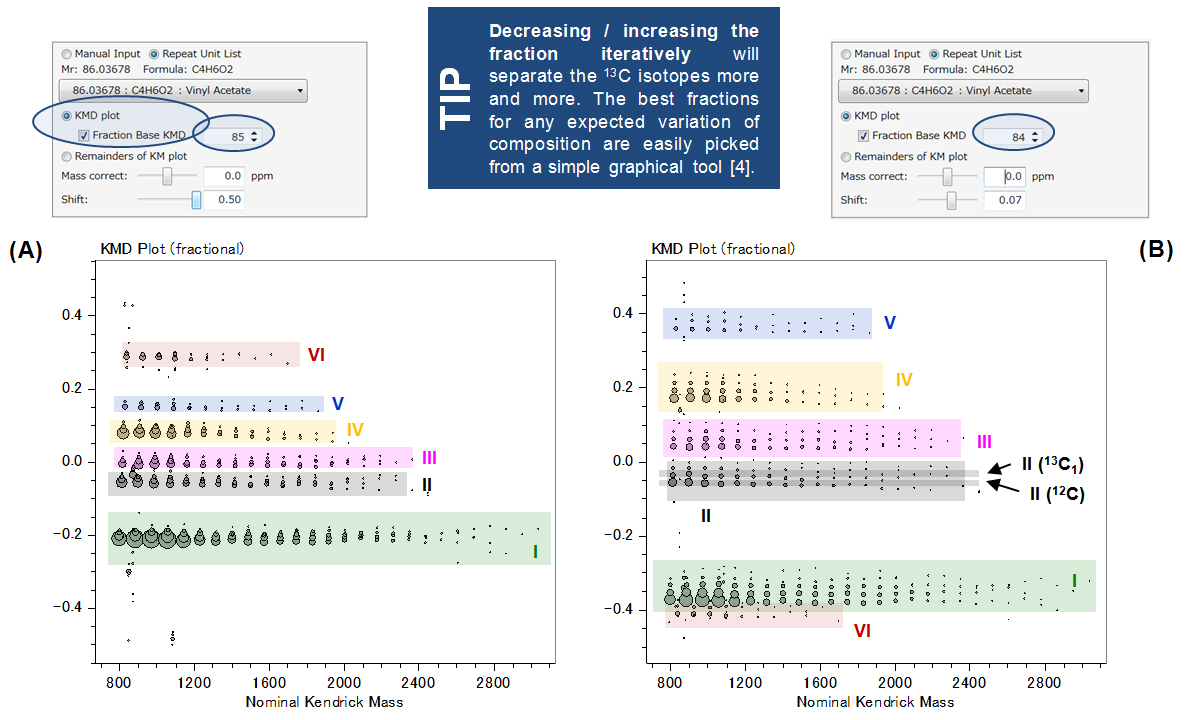 Fig. 3. Full scale fraction base KMD plots computed with the fractional base units (A) 3HB/85 and (B) 3HB/84 using msRepeatFinder.

The "grouping mode" in msRepeatFinder combined with the fraction base KMD analysis allows each ion series to be labelled in the mass spectrum and the plot with visual color coding via a simple selection of points (Fig. 4). The high separating power reached with 3HB/84 further allows the selection of monoisotopic peaks (12C, light green dots) from the main series I (dark green dots). Unselected ion series can also be hidden to further help at visualizing the polymeric series from the background peaks. 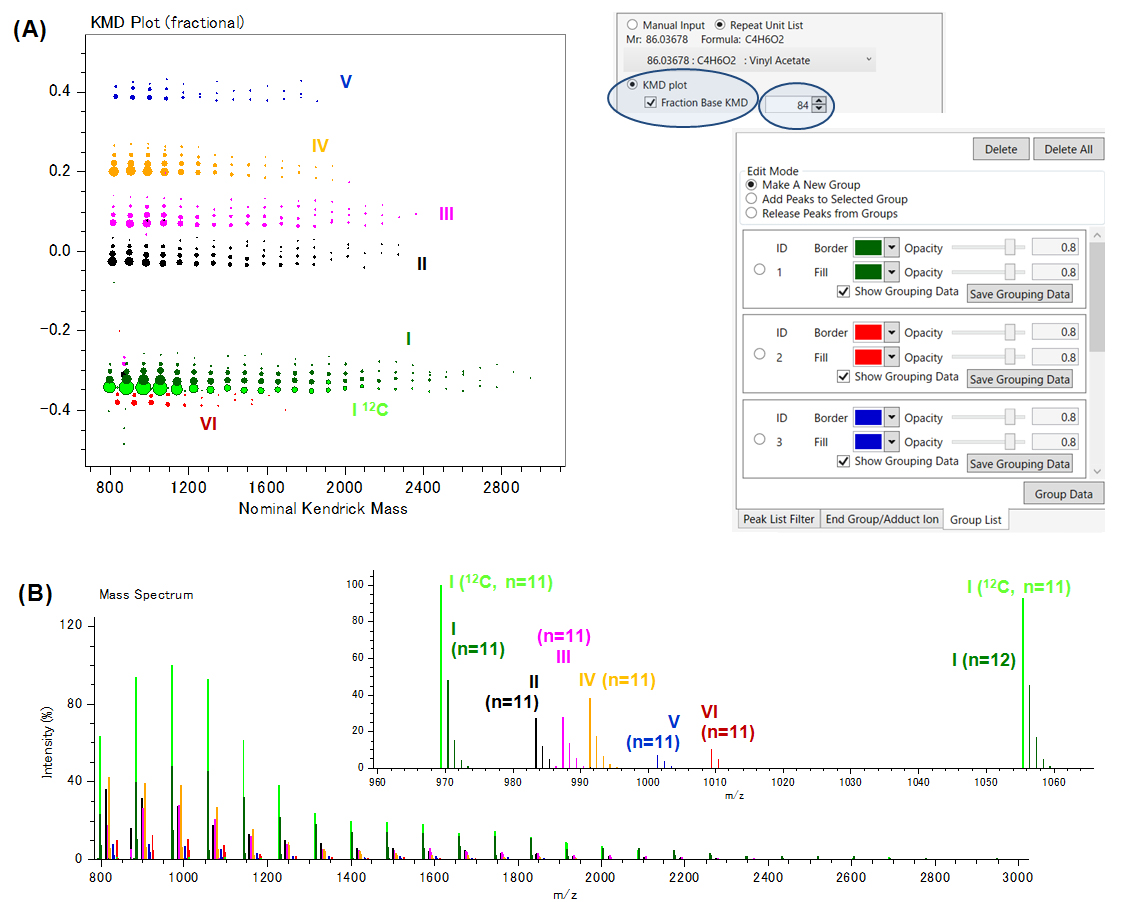 Fig. 4. (A) Fraction base KMD plot computed with the fractional base unit 3HB/84 in grouping mode to label the series in the mass spectrum (B).

The KMD analysis becomes dynamic with the introduction of the "Fraction Base KMD" relying on the resolution-enhanced methodology. It is a highly versatile tool as decreasing or increasing the value of the fraction leads to numerous favorable separations of ion series varying by their isotopic composition, end-groups or adducted ion. It can be successfully adapted to any type of homopolymers and any type of mass spectral data of medium to ultrahigh accuracy.

This application note is written based on the results of a joint research project with Sayaka Nakamura, Thierry Fouquet and Hiroaki Sato from the Research Institute for Sustainable Chemistry, National Institute of Advanced Industrial Science and Technology (AIST).