POMMIE (Phase Oscillations to MaxMize Editing) is a 13C experiment that, like the more familiar DEPT experiment, utlilizes polarization transfer to enhance the intensities of the 13C signals. However, unlike DEPT, POMMIE edits the spectrum by varying pulse phase rather than adjusting pulse flip angle.
Fig. 1 shows the pulse program of Q-POMMIE (Quantitative-POMMIE)1). It improves quantitative performance by varying Δ and pulse phase to average the efficiency of polarization transfer (Fig. 1). The spectrum pattern of Q-POMMIE is identical to DEPT45.

Quantitative NMR measurements require sufficiently long repetition times to allow the (near complete) recovery of magnetization between scans. For the standard 13C{1H} inverse gated decoupling method, the minimum acceptable repetition time is dictated by the 13C T1s, which can be very long (up to several minutes). On the other hand, the minimum repetition time of the Q-POMMIE method is dictated by the usually much shorter 1H T1s. This means that Q-POMMIE can yield quantitative 13C spectra in less time and with higher sensitivity than via the 13C{1H} inverse gated decoupling method.

Fig. 2 shows a comparison of 13C{1H} inverse gated decoupling and Q-POMMIE spectra of 10% Cinnamic acid cis-3-hexenylester in CDCl3. Although quaternary carbons are not observable in the Q-POMMIE spectrum, protonated carbon signals are recorded with significantly higher sensitivity, thereby allowing more accurate quantitation. Tab. 1 shows the comparison of the peak integrals obtained from each spectrum. While the CH integrals are significantly underrepresented in DEPT45, those obtained using Q-POMMIE are very close to those obtained via the 13C{1H} inverse gated decoupling method. 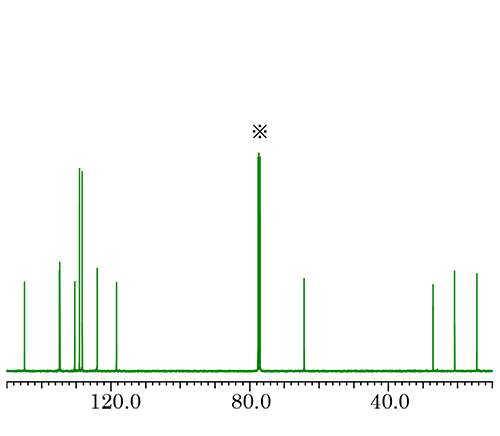 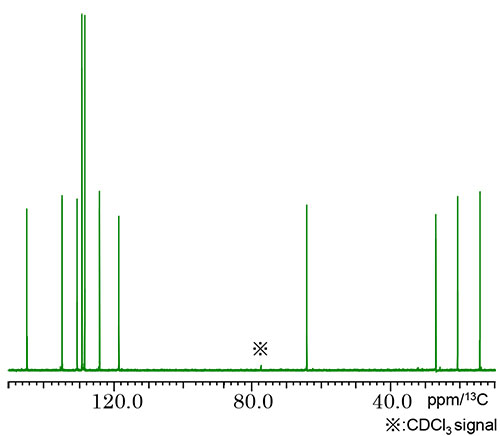 As an illustration of the utility of the Q-POMMIE experiment, Fig. 3 shows a comparison of spectra recorded on a sample of a UV initiator. The 13C spectrum of this sample contains a signal at 77.2 ppm which is completely obscured by the solvent signal, so its integral cannot be determined via 13C{1H} inverse gated decoupling (Fig. 3a). On the other hand, the solvent signal is not visible in the Q-POMMIE spectrum, allowing this signal to be cleanly observed and hence integrated (Fig. 3b). 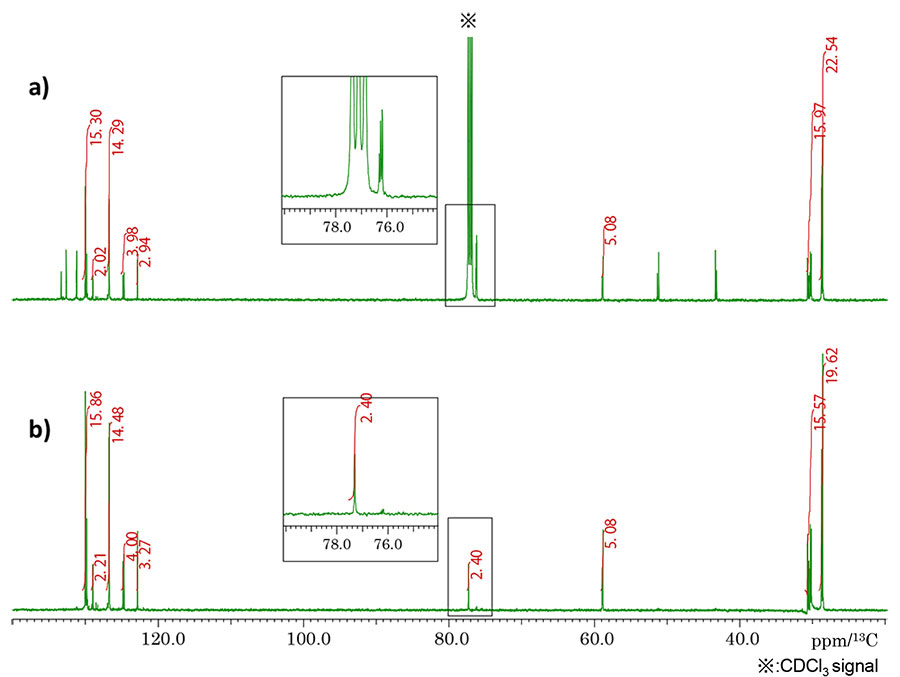