Matrix assisted laser desorption/ionization (MALDI) mass spectrometry is a powerful tool for the analysis of synthetic polymers.
This technique, when combined with a high-resolution time-of-flight mass spectrometer, can be used to identify differences in monomer, polymer end groups, and their molecular weight distributions. The molecular weight distribution is often expressed as number average molecular weight (Mn), weight average molecular weight (Mw), and dispersity (D). More recently, MALDI mass spectrometry imaging (MALDI-MSI) has been used to visualize the locations of compounds on sample surfaces.
The MALDI-MSI raw data includes the position information (X and Y) as well as the mass spectral information (m/z and intensity) for each position. A target compound peak can then be specified to calculate the ion intensity for each pixel in order to draw a mass image. MALDI-MSI has been widely used to show the localization of proteins, peptides, lipids, and drugs on frozen tissue sections.
However, this technique has not been widely used for polymer analysis.One reason for this is that polymers have molecular weight distributions which means that mass images based on specific degrees of polymerization (specific m/z value typically used by conventional methods) do not necessarily express a clear picture for the full polymer localization. In this report, we investigate a MSI visualization method for synthetic polymers that uses Mn, Mw and D as indices for visualization.

The work flow for visualizing polymers is shown in Figure 1. This function is implemented in the JEOL msMicroImager™ V2 software. 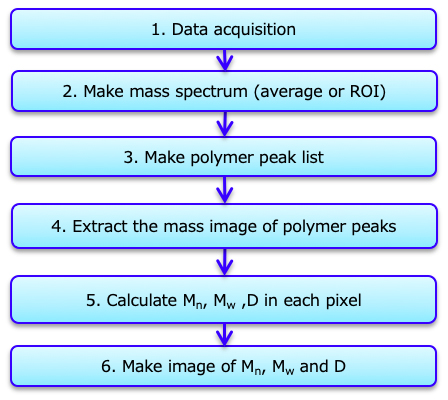 Figure 1 The procedure for making the images of Mn, Mw,and D.

In order to verify the visualization method for synthetic polymers, a model sample was prepared using polyethylene glycol molecular weights of 600 and 1000 (PEG600 and PEG1000, respectively).
The reagents used are shown in Table 1. A mixed solution of PEG1000, α-CHCA, and NaTFA 5/10/1 (v/v/v) was spotted on the left-hand spot, and a mixed solution of PEG600, PEG1000, α-CHCA and NaTFA 5/5/10/1 (v/v/v/v) was spotted on the right-hand spot (Figure 2).
The MALDI-MSI data was measured by using the SpiralTOF positive ion mode on the JMS-S3000. The pixel size was 50 μm, and the laser irradiation frequency was 50 times for each pixel. The MSI analysis and visualization was performed by using the JEOL msMicroImager™ software.

Figure 2 Schematic of the model sample.

The average mass spectrum for the entire sample region (right-hand and left-hand spots) is shown in Figure 3. The observed PEG series is HO(C2H4O)nH + Na+. The mass images for m/z 569.3 (n=12), 1009.6 (n=23) and 1361.8 (n=30) are also shown in Figure 3.
All three ions were observed in the right-hand spot images (PEG600 and PEG1000 mixture). However, the m/z 569.3 mass image did not show any significant signal in the left-hand spot due to the presence of only the higher molecular weight PEG1000.
In total there were eighty peaks observed in the averaged PEG series mass spectrum. If one carefully reviewed the eighty mass images associated with these ions, it could be possible to understand that the right-hand spot had a broader polymer distribution than the left-hand spot.
However, it is difficult to intuitively and quantitatively determine these results. 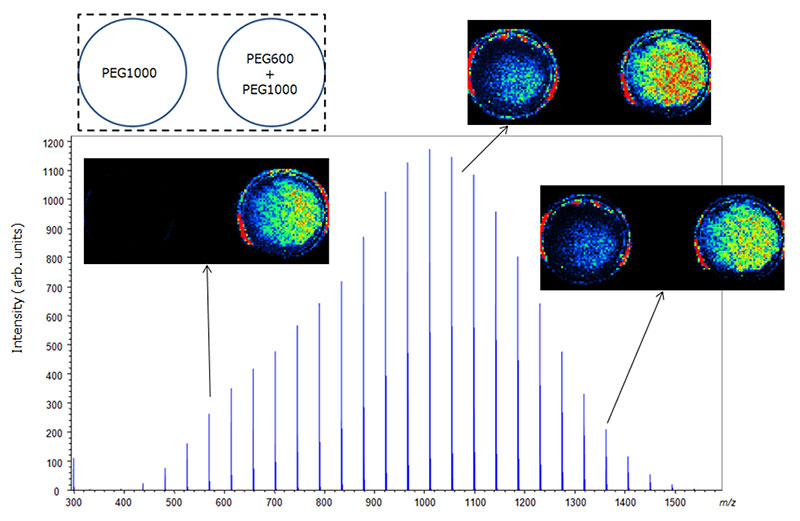 To solve this issue, the Mn, Mw and D images were calculated by the msMicroImager™ software using all eighty PEG series mass images (Figure 4).
The Mn, Mw and D values can be easily understood by using the color tone of each pixel. For the image of Mn and Mw the values for the left-hand spot were larger than the values for right-hand spot which is logical because only the larger molecular weight PEG1000 is present in that spot. In contrast, the D image for the right-hand spot was larger than left-hand spot due to the wider molecular weight distribution present in the right-hand spot which contained both PEG600 and PEG1000.
Additionally, the right-hand spot images showed 2 regions (A, B) in which the Mn, Mw and D are different. Region A shows a higher Mn and Mw and a lower D, thus indicating the presence of a higher average molecular weight, less disperse polymer in that region. The region of interest (ROI) mass spectra for these two areas (Figure 5) also show higher intensity peaks for m/z < 800 for Region B than for Region A. These mass spectra further support the observation that Region B has smaller Mn and Mw as well as a larger D, thus indicating a wider mass distribution in this region.
Additionally, these image results indicate that the PEG600 and PEG 1000 were not uniformly deposited in the right-side spot. It is noteworthy that this variation would be extremely difficult (if not impossible) to determine by using the conventional MSI method of creating each ion image separately (Figure 3) and comparing them individually to each other.

In this report, a MALDI-MSI visualization method was introduced for synthetic polymers.
Using this method, the mass images for a polymer series (including ~100 mass images) can be summarized into three images – number average molecular weight (Mn), weight average molecular weight (Mw) and polydispersity index (D) – which are all commonly used indices for polymer analysis. Since these three indices represent the synthetic polymer as a whole, the spatial distribution of the synthetic polymers can be understood more intuitively. 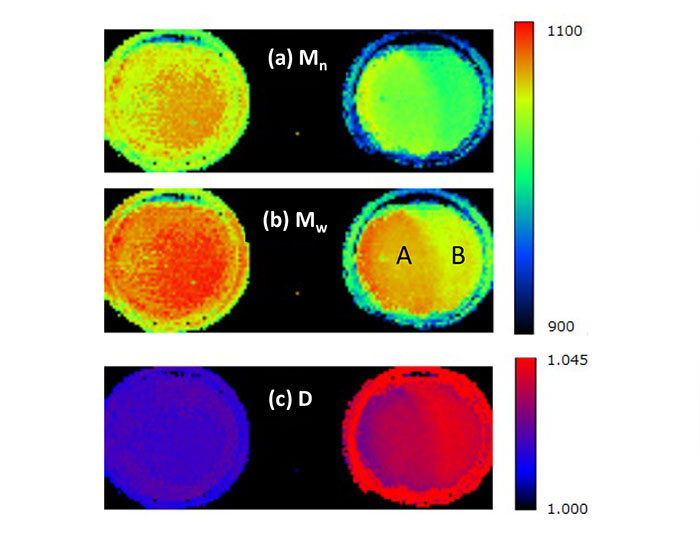 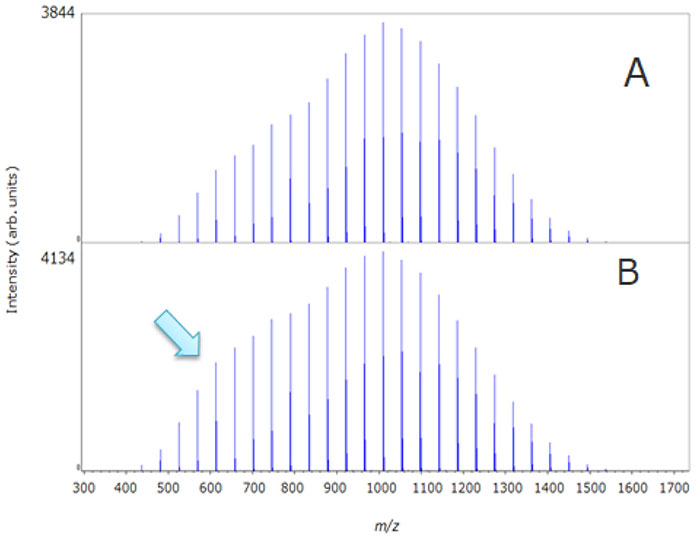 Figure 5 The ROI mass spectra at (A) left and (B) right side of right-hand spot. The polymer distribution was wider in right hand which could not be identified in conventional method.