Matrix assisted laser desorption/ionization (MALDI) mass spectrometry is a powerful tool for the analysis of synthetic polymers.
This technique, when combined with a high-resolution time-of-flight mass spectrometer, can be used to identify differences in monomer, polymer end groups, and their molecular weight distributions. However, there are limitations to doing accurate mass analysis of high molecular weight polymers. For example, as the polymer molecular weight increases, the ionization efficiency, detection sensitivity, and ratio of monoisotopic ions used for accurate mass analysis all decrease. One way to address this is to use an “on-plate alkaline degradation” method [1] that was previously published in which high molecular weight polyester or polycarbonate are partially hydrolyzed by an alkaline reagent to form smaller oligomers that can then be analyzed by high-resolution MALDI-TOFMS.
This degradation into oligomers is not only advantageous for accurate mass analysis but also for structural analysis by using tandem time-of-flight mass spectrometry (TOF-TOF).
In this report, we investigated the structural analysis of the polyethylene-terephthalate (PET) polymer exposed to the on-plate alkaline degradation method by using the JMS-S3000 "SpiralTOFTM-plus" with TOF-TOF option. The SpiralTOFTM-plus uses an ultra-high resolution TOF for MS1 which allows monoisotopic precursor selection and a reflectron TOF for MS2 to analyze the product ion spectra produced from high energy collisional induced dissociation (HE-CID).

PET (film) was dissolved in hexafluoro-2-propanol (HFIP) solution at a concentration of 10 mg/ml.
The matrix compound 2,4,6-trihydroxyacetophenone (THAP) was dissolved in HFIP/tetrahydrofuran (THF) at a concentration of 10 mg/ml. Sodium hydroxide (NaOH) 10 mg/ml methanol solution was used for on-plate alkaline degradation. The high resolution mass spectra were measured by using SpiralTOF positive ion mode, and HE-CID measurements were performed in TOF-TOF positive ion mode.

Next, the C10H8O4 KMD plots for the before and after on-plate alkaline degradation mass spectra are shown in Figure 2A and 2B, respectively. The before degradation sample showed two distinct series (blue: Cyclic, red: Cyclic + C2H4O). However, the after degradation sample showed a lower intensity for the original series as well as the emergence of several new series in the sample.
The three series discussed in Figure 1C are colored as green: TMe/E, yellow: E/E, and orange: TMe/E(diE),. 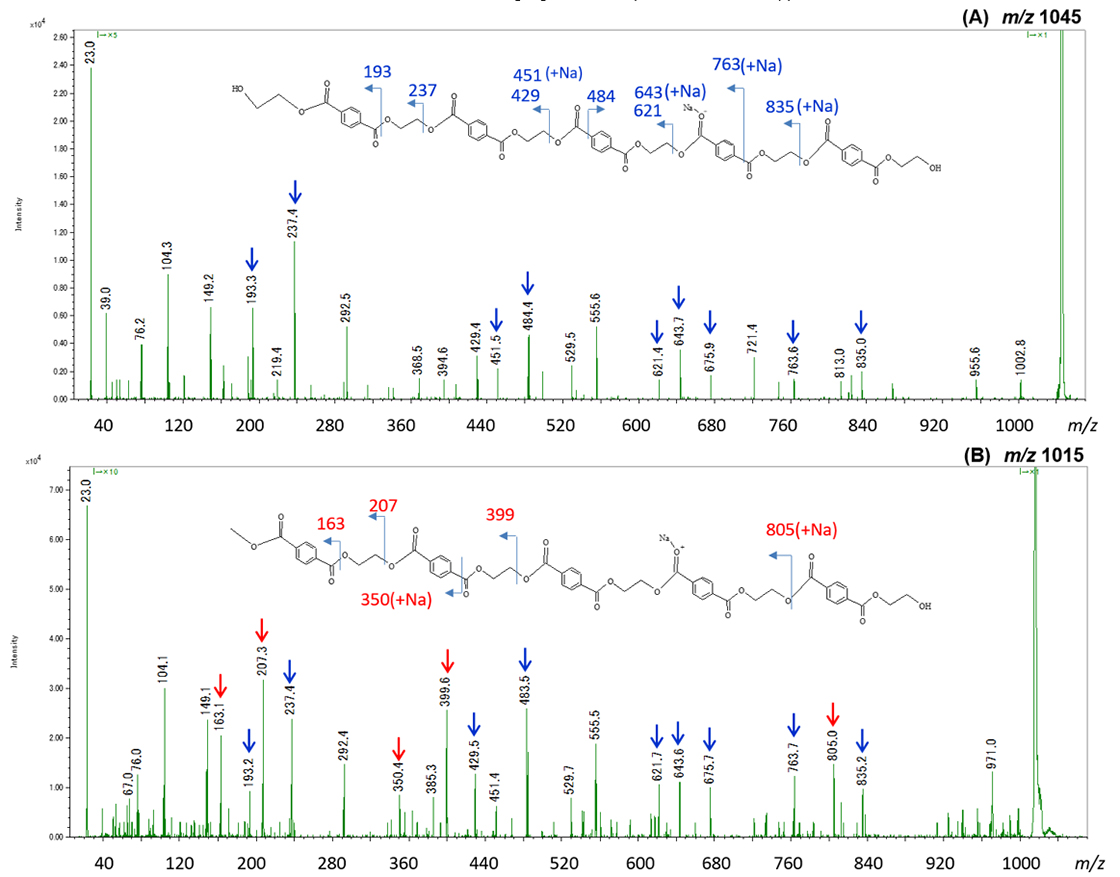 Next, the product ion spectrum of TMe/E(diE), which is estimated to have the [C2H4O] unit inside the repeat unit, was analyzed by using TOF-TOF mode. In addition to the peaks observed in Figure 3A and B (blue and red arrows), the characteristic peaks highlighted with green arrows in Figure 4 support the estimated structure shown.
Since the peaks common to Figure 3A and B (m/z 163, 193, 207 and 237) correspond to the fragmentation channel near the end-group, it can be inferred that the [C2H4O] unit exists in the main chain.