As a measurement example of the T1ρH based ROSY, we will introduce the separation of soft and hard segments of the 13C spectrum of polyurethane (a smart phone cover case). Polyurethane has soft and hard segments in the molecule, each of which aggregates between the molecules to form their respective domains. A typical method for distinguishing between soft and hard segments is measuring CPMAS which tends to observe hard segments, and the LD (Low power Decoupling) MAS which tends to observe soft segments (Fig.2). Although it is possible to see the difference in segments to some extent in the both measurements, it is often difficult to assign domains because CPMAS observes soft segments as well as hard segments, and LDMAS observes hard segments as well as soft segments in small increments. On the other hand, the ROSY separates the spectrum from spatial differences through 1H spin diffusion, allowing the two segments to be separated more clearly. Fig.3 shows the T1ρH based ROSY spectrum. In the T1H-ROSY spectrum, both segments cannot be separated (not shown). On the other hand, in the T1ρH-ROSY spectrum, the soft segment and the hard segment can be clearly separated. In addition, this indicates that the domain size of the segment ranges from a few nm to a few tens of nm. 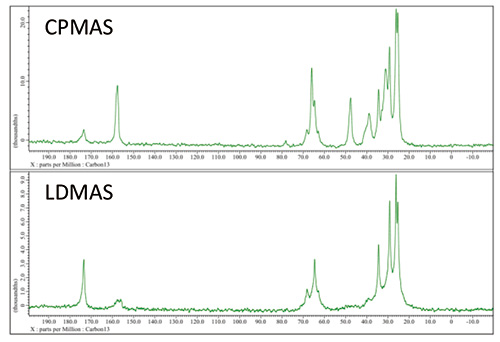 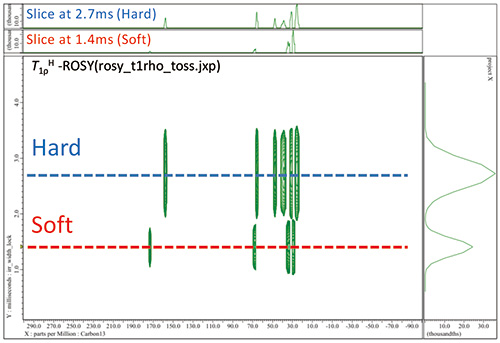