Similar to the dipole-dipole interaction between paramagnetic ions, magnetic nanoparticles (MNPs) show the spectral line-width broadening effect by the interaction between particles, too. Figure 1 shows the superparamagnetic resonance (SPR) spectra of Fe3O4 magnetic nanoparticles dispersion in toluene and dependence of line widths on the concentration. Line widths were measured on the narrow components with a diameter of 5 nm and 10 nm, respectively. As shown in Figs.1 (c) and (d), although both line widths are proportional to the concentration of the particles, the proportional constant and the line widths of 5 nm particles are larger than that of 10 nm particles. Spectral shapes and g-values remain almost unchanged in both diameter particles, as shown in Figs. 1 (a) and (b), but getting broader only a little. It is reported that the magnetic fluid of Fe3O4 with a diameter of 9 nm shows a large peak shift and broadening as the concentration increases, in the previous study[1]. This kind of difference could be considered that the shape, the distribution of diameters, and the ligands fixed to particles affects spectral properties. Moreover, the effect of aggregation between particles should be considered, too. The concentration dependence of MNPs lets us know information reflecting the micro environment and structure around particles. 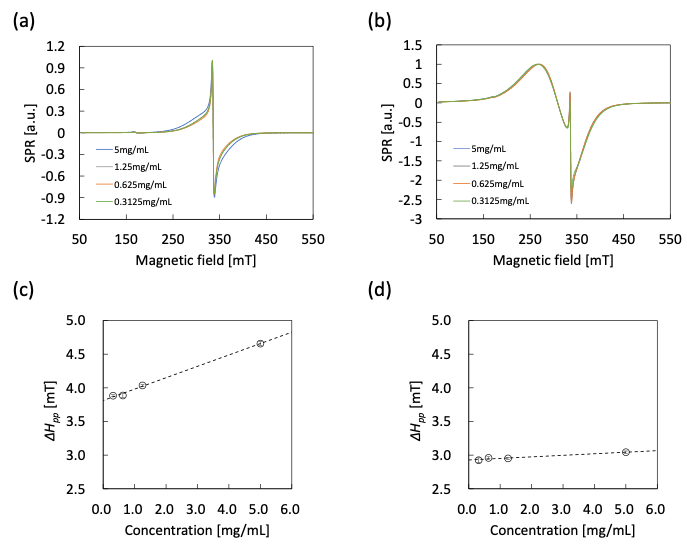 On the evaluation of magnetic particles and fluid, it is important not only to explore the magnetic properties of MNPs itself, but also to evaluate the effects for the environment (solvent or matrixes) around the particles. A contrast agent for MRI (magnetic resonance imaging) or agent for Hyperthermia is used for increasing the image sensitivity or effective elimination of cancer cells. Therefore, the characterization of solvent or matrixes in which MNPs are located is necessary.
The time domain nuclear magnetic resonance (TD-NMR) method is one of the typical material evaluation methods, and is used widely for product administration, research, and development.
The block diagram which Figure 2 shows is an example for the TD-NMR measurement system using ENDOR cavity (1H frequency is 14.55 MHz). Since an RF irradiation coil is usually equipped to ENDOR cavity, basic 1H-NMR relaxometry experiments can be done using a combination of tuning circuit, duplexer, RF-power amplifier, and the NMR spectrometer. 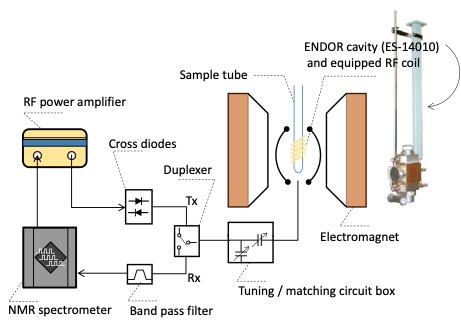 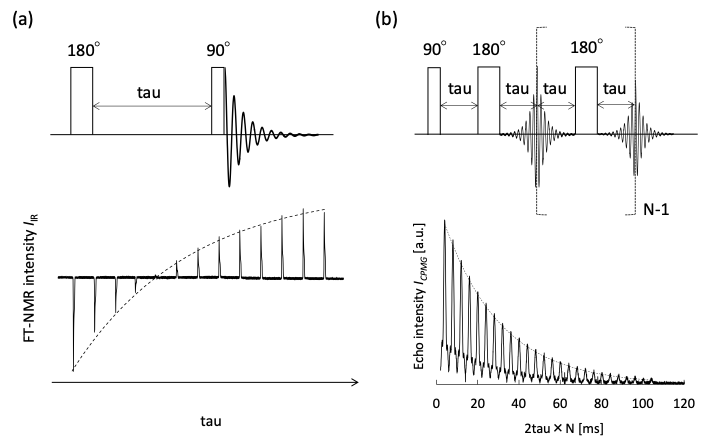 One of the T2 typical measurement methods is CPMG (Carr-Purcell-Meiboom-Gill) method. In this method, the echo intensity ICPMG is measured by successive N times applying microwave with pulse width of 180 degree every 2×tau time shown in Fig. 3 (b). T2 can be estimated by fitting the ICPMG using eq. (2).

As an example, the aqueous magnetic fluid MNPs dispersed is widely researched for the development of the contrast agent for MRI. Contrast agents are used for increasing image sensitivity of MRI. One of its evaluation indexes is "relaxivity".
Graphs which Fig. 4 shows are plots of the dependence of relaxation velocity on molarity in Fe3O4 magnetic nanoparticles dispersion in toluene. Each relaxation velocity of T1N or T2N is proportional to the concentration of Fe3O4 with respective particle diameters, and simultaneously has its intrinsic proportional constant respectively. This constant is called "relaxivity". T1-weighted contrast agents (positive agents) are designed for generating bright images. Evaluation index for positive agents is a ratio of relaxivty "r2/r1", lower value of "r2/r1" is regarded more effective[2]. Estimating "r2/r1" from magnetic fluid* shown in Fig. 5, MNPs with a diameter of 5 nm shows the lowest r2/r1, and would be expected to generate a bright image. 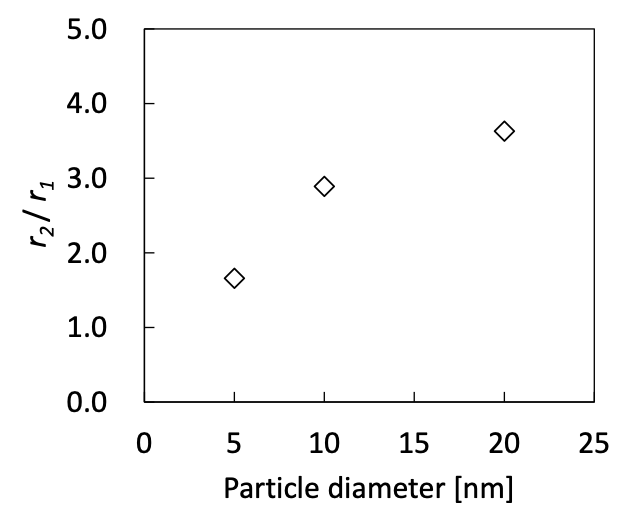