NMR non-invasively provides quantitative information from complex mixtures such as food and biopsy samples with high throughput, high reproducibility, and with simple sample preparation. These advantages are used for sample categorization, generating regression model for predicting particular value. In the original article, sample categorization of Japanese rice wines and generating prediction model of rice polishing ratio is described. The rice polishing ratio is the degree of polishing of rice. For example, 60% polishing ratio means that only 60% of the inner part of rice grain is used for rice wine production.
Japanese rice wine, a kind of brewed liquor, is mainly made of rice, rice malt, and water. Production procedures are unique where both catabolization of starch to glucose by malts, and glucose to ethyl alcohol by yeast take place simultaneously. Six categories of Japanese rice wine have been established by the National Tax Agency of Japan. In this system, the rice polishing ratio and the addition of alcohol are the main criteria for classification. Brewed alcohol addition is used for Daiginjyo, Ginjyo, and Honjyozo production. Rice polishing ratios in Daiginjyo and Ginjyo are defined less than 50 and 60%, respectively. Addition of brewed alcohol is not allowed in Jyunmai Daiginjyo, Jyunmai Ginjyo, and Jyunmaisyu.

In the original paper, a total of 25 samples of various commercially available Japanese rice wine with different properties were studied. The samples varied in the rice polishing ratio, addition of alcohol, and variety of rice (Table 1). The NMR samples were prepared by the addition of 200 uL of 200 mM sodium phosphate buffer containing DSS as internal standard with 500 uL of rice wine. Therefore, the NMR sample preparation was far simpler than the sample preparation for GC-MS analysis. 1H-NMR analyses were compared with GC-MS analyses. Single pulse NOESY experiment was used with presaturation by shifted laminar pulse for both water and ethanol signals [2]. All spectra were recorded continuously on an JNM-ECZ400S system equipped with a ROYALPROBE™.

4 sample replicates were measured for each rice wine; therefore, a total of 100 spectra were recorded. The spectra were converted into a matrix by bucket integration. Bins within 4.4-4.9 ppm were excluded and the bins with value less than 1/1000 of DSS signal area were also excluded. Non-targeted data mining with Principle Component Analysis (PCA) and Partial Least Squared Regression (PLSR) were performed using the matrix as explanatory variable. 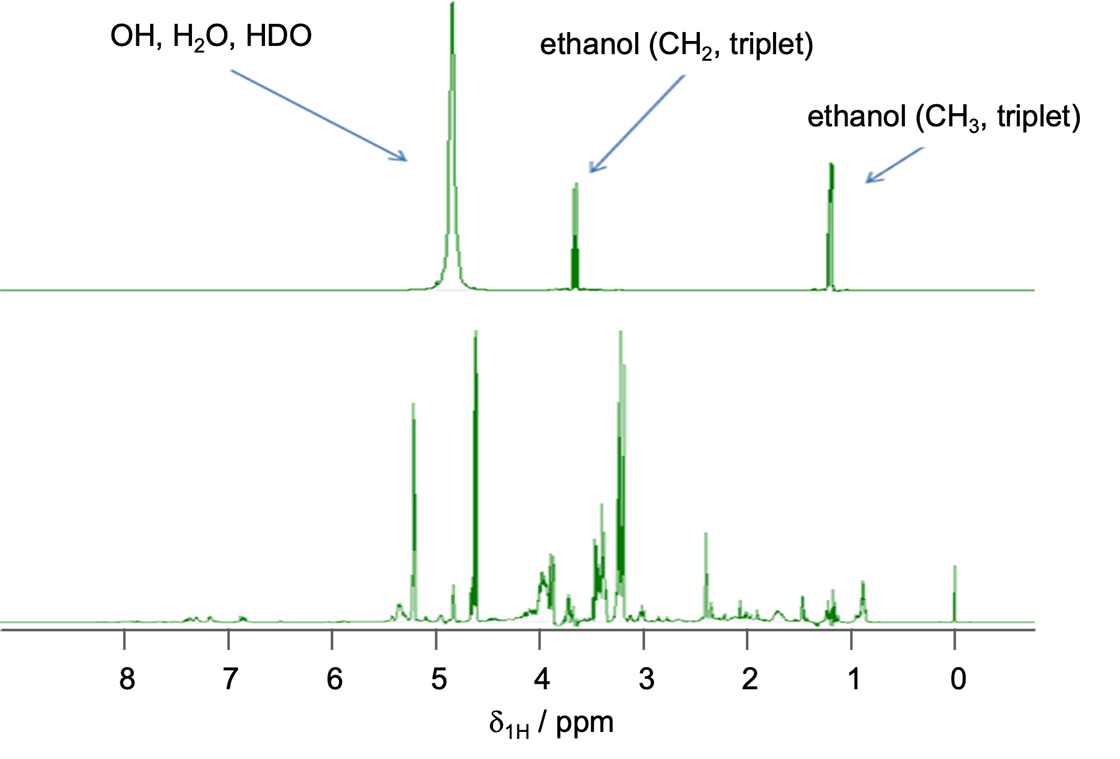 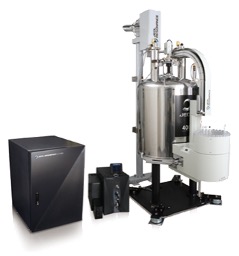 Score and loading plot in PCA are shown in Figure 2. Principle component 1 (PC1) reflects addition of brewed alcohol. Bins within 3.4-5.2 ppm were abundant in rice wine with brewed alcohol addition.

PLS regression model for rice polishing ratio was generated by the use of 1H NMR data matrix as explanatory variable and polishing ratio as object (Figure 3). PLS regression uses latent variables for regression and latent variables are linear combination of explanatory variable for maximum covariance between objects [3]. PLS regression can avoid issue from multicollinearity in data set including data matrix from 1H-NMR spectra. A quantitative index for model accuracy is provided by the parameter R2Y, which indicates the proportion of variance described by the model. The prediction performance is provided by the parameter Q2Y, here which indicates the 7-fold cross-validation value of R2Y. The R2Y and Q2Y values were 0.889 and 0.830, respectively, when 5 latent variables were used. Generally, Q2Y > 0.5 is considered good and Q2Y > 0.9 is considered excellent [4]. 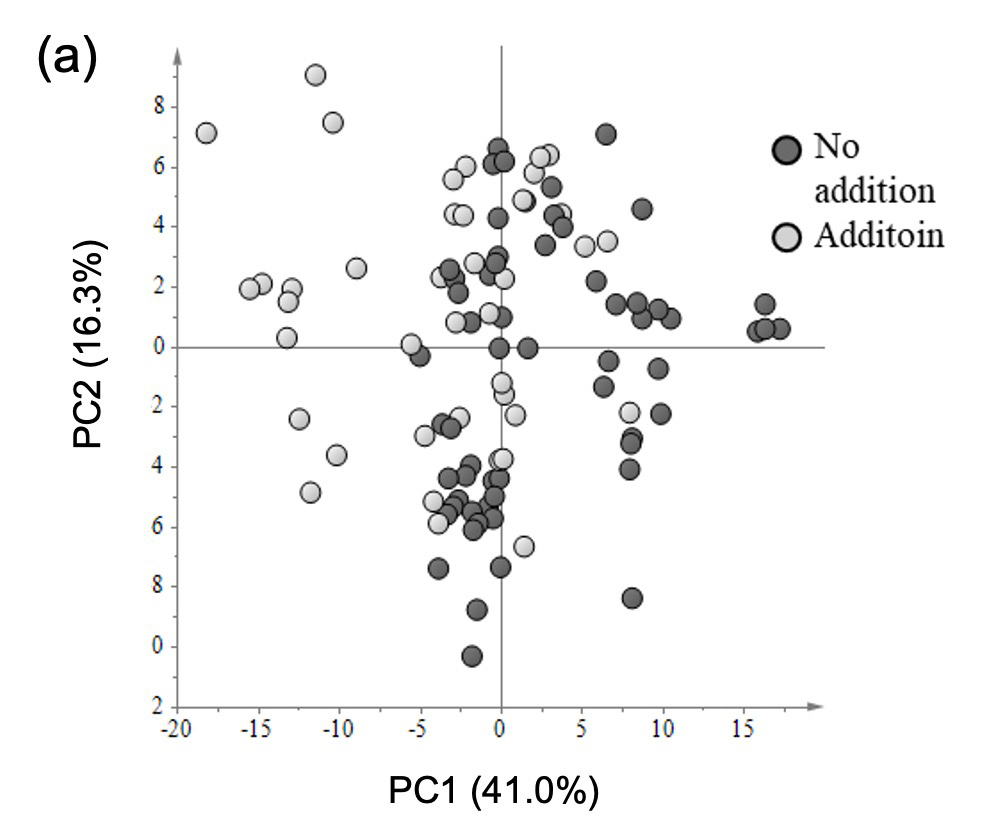 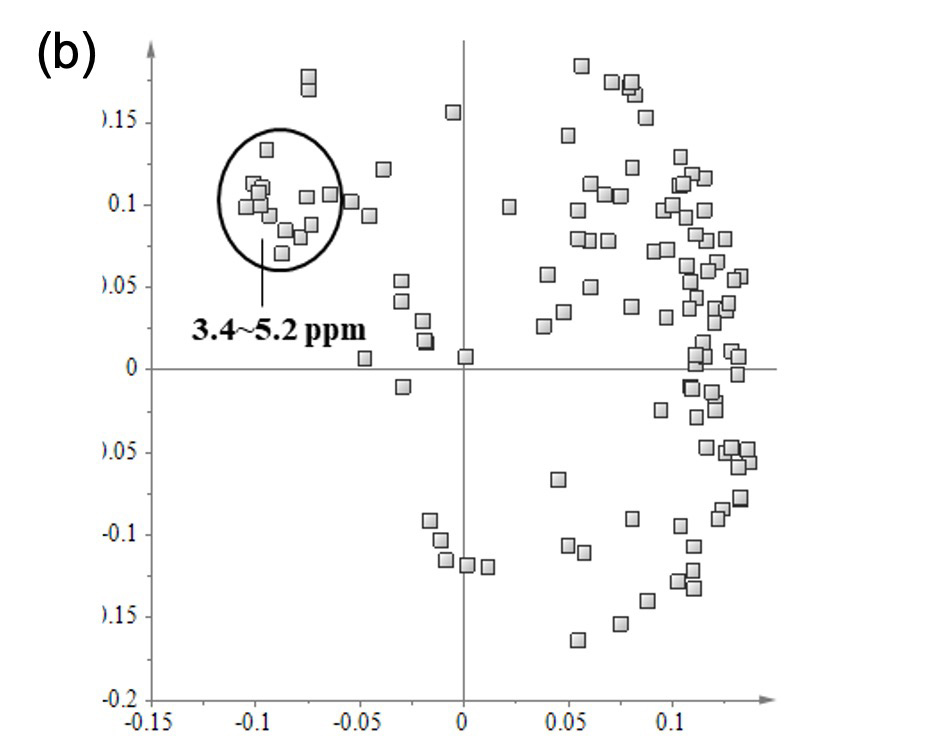 (a) Score plot (PC1 vs PC2). Dark dots: Japanese rice wine without addition of brewed alcohol, light dots: Japanese rice wine with addition of brewed alcohol. (b) Loading plot (PC1 vs PC2). Data were normalized to the area of internal standard, and each variable was scaled by its standard deviation. Reproduced with permission from the society for Biotechnology, Japan [1]. 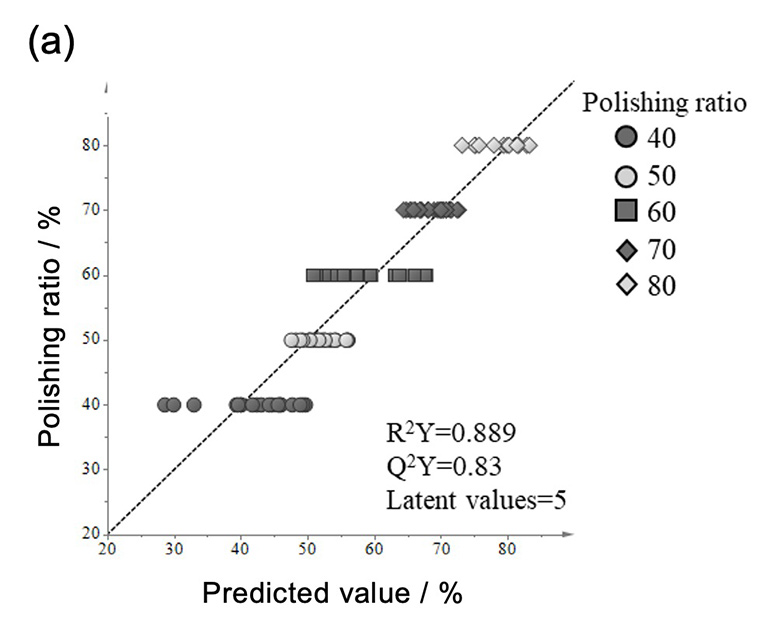 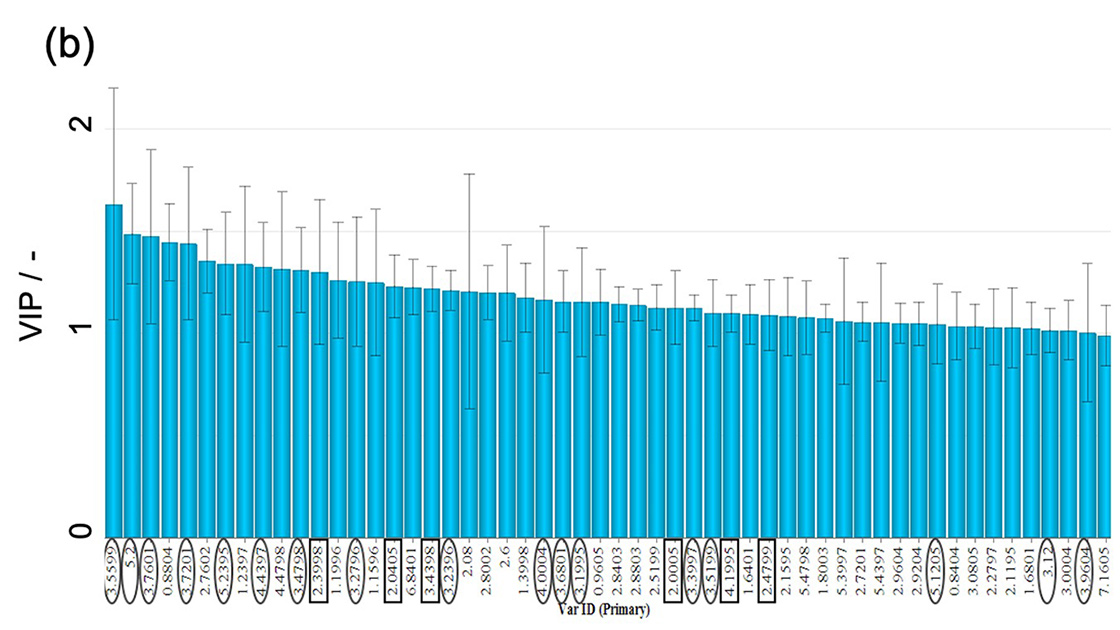 (a) Predicted versus actual rice polishing ratio. Here 5 latent variables were used for regression. (b) VIP in each variable. Here variables VIP larger than 1 are shown. Reproduced with permission from the society for Biotechnology, Japan [1].

Importance of variables in the PLS model is provided by VIP (Variable Importance in the Projection). A value of 1 is typically used as a threshold for VIP. Variables VIP of which are more than 1 are shown in Figure 3(b).

The original paper discussed the comparison between NMR and GC-MS, however, GC-MS data are not discussed in this application note. The authors concluded NMR had an advantage over GC-MS in simpler sample preparation, higher throughput, detecting various chemical species at once, and spectral reproducibility although, GC-MS provided almost the same results. They also concluded there was no fear of "annoying carry over" and "matrix effect" in NMR measurements.