Dr. Kazuhiro Marumoto, associate professor, Materials and Engineering of Organic Semiconductor, University of Tsukuba, is the pioneer of development, characteristic evaluation and the solid-state physics of organic electronic device using organic semiconductor. During research, he succeeded in developing a method to identify the cause of performance deterioration as organic electronic device is used.
A lot is expected for improving durability.

Production of semiconductor is possible only by printing or by painting and drying. Organic semiconductor is greatly expected as a next generation semiconductor. It was 1977 when conductivity of organic material was proven by Dr. Hideki Shirakawa who was awarded the Nobel Prize and others. Nearly 40 years have passed since then, and research has progressed dramatically.
Practical use of various organic electronic devices has become visible.

One example of them is the organic solar battery. Presently, it is not possible to make silicon solar battery, which is the majority, into less than 100 micron thick.
However, if it is organic semiconductor, overwhelming thinness of hundreds nanometers is possible. It is ok to bend or paste like it is a wrap film. Expectations for its application such as pasting it on the automobile window and driving the automobile while generating electricity is being raised. However, before that, a great issue was standing in the way.
From an early stage, the phenomenon has been reported that the volume of generated electricity suddenly falls while electricity is generated with an organic solar battery. A hypothesis that the cause would be that electric charges are stored somewhere in the element(electric charge trap), but the cause was never identified. 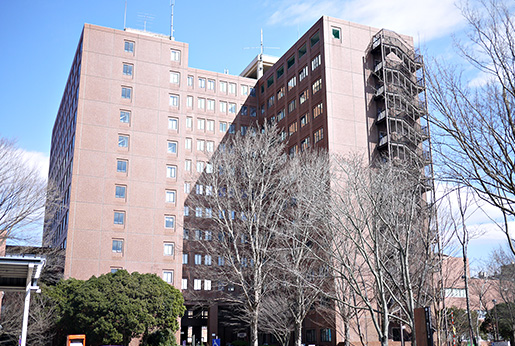 Institutes of Engineering Sciences Building where ESR devices are placed.

There comes Dr. Marumoto, Associate Professor. While studying the characteristics of conductive polymer which is used for organic solar battery, he found that electric charge trap tends to occur at the end of materials. Moreover, he succeeded in measuring and proving the fact that when electricity is conducted to electronic devices such as solar batteries, electric charge is trapped at the boundary between material surfaces, by being the first in the world using ESR (Electron Spin Resonance). It was exactly the moment when the hypothesis was confirmed as fact.

ESR’s new role conducted by thinking from a different angle 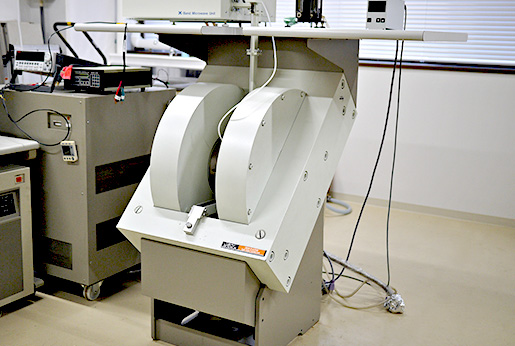 ESR itself is not a new technology, but has been used for 70 years for quantitative measurement of materials. However, Dr. Marumoto is the first person to use it to measure performance of electronic device. For performance measurement of electronic device, it is natural to measure how much electricity is conducted. However, ESR is not possible to detect the conducting electric charge.
Still, Dr. Marumoto thought “if it is not possible to measure what is conducted, it is ok for us to measure what is not conducted”. It was thinking exactly from a different angle. As a result, ESR has been given a new role as a measurement tool for electronic devices. As the ESR of JEOL, which Dr. Marumoto used this time, has wide photo irradiation window, and easily acquires outside light, it was exactly suitable to measure a device that generates electricity through light like solar batteries.

The electric charge measurement method that Dr. Marumoto developed already began influencing the industry. At an early stage in creating device element, performance evaluation became possible, and early selection of element of high durability became possible. By this, speed-up in development and improvement is anticipated, and right now, Dr. Marumoto’s Lab is flooded with teaching requests and offers of joint research from companies.
Dr. Marumoto explains his further expectation to ESR that “NMR is good at knowing what makes a material, but to know the performance as device that conducts electricity, it is only possible with ESR. I would like to observe not only organic electronic device, but also various electronic devices by using ESR. ” Micron eyes that can catch the electric charge that is not conducting. The “unique point of view” is likely to change the research and development of electric device greatly.