A challenge to established methods of organic synthesis – the development of solid catalysts supported by solid state NMR.

Professor Shū Kobayashi of the University of Tokyo is a pioneer of environmentally friendly “Green Chemistry”. For more than 20 years, he has been studying chemical synthesis and its influence on the human body and the environment and has been seeking ways to reduce the consumption of energy and resources in chemical reactions.

A method to change drug synthesis by studying the past

The manufacture of fine chemicals, such as drugs, is traditionally inefficient and the amount of waste generated during the synthesis of drugs results in as much as 20 to 100 times more than the amount of the product obtained. Thus, it is not possible to ignore the negative impact of fine chemical processes on the environment.

Prof. Kobayashi has focused on flow synthesis, which has previously been used to synthesize large amounts of commodity chemicals such as ammonia, and he is investigating this technique to more complex organic syntheses. Flow synthesis is achieved by connecting different columns for each reaction step and passing the starting materials through them as a solution. Whilst the batch method, which is normally used in typical organic synthesis, requires many reaction tanks, flow synthesis can simplify the process and greatly reduce the amount of waste. However, a major issue with flow synthesis is that by-products generated during the flow process are not removed and thus adversely affect on the reaction process itself. Prof. Kobayashi is seeking to design new reaction process to produce the required substance without by-products.

A key to developing more efficient processes is by using an appropriate insoluble catalyst. Typically, catalysts are dissolved in an organic solvent, together with the starting materials, and are discarded with the solvent after the reaction. Prof. Kobayashi has developed various catalysts that are insoluble but has high reactivity. Since recovery and reuse of these insoluble catalysts are possible and that theses catalysts does not leach out into the next column, the flexibility to design new reaction process and combination of catalysts in flow has been improved.
Prof. Kobayashi confidently stated that, “Compared with batch synthesis, the instrument size is one-tenth, and the waste generated for organic synthesis is only one-hundredth. By using a small equipment on your desk, you can produce as much as 1 kg of product in one hour”.
In April 2015, he succeeded in synthesizing the drug, Rolipram, using flow synthesis with insoluble catalysts packed in columns and his report was published in the prestigious journal, Nature. By exchanging only one column, the opposite optical isomer of the drug was synthesized and this is important since the optical activity of a drug is important to medicinal properties. While in the initial report, a total yield of 50% was achieved, Prof. Kobayashi announced that, “Now after one year, the yield has improved to more than 90%, and the time has come for practical applications of this method”.

Development is supported by NMR

For a newly developed catalyst, the molecular structure needs to be understood at the atomic level in order to clarify the reaction mechanism. However, the catalysts that Prof. Kobayashi developed were difficult to analyze because they are solids and he had to approached JEOL for their expertise.
Nuclear Magnetic Resonance spectroscopy (NMR) has been extensively used as an analytical tool typically used to study materials in solution. Since the catalysts developed by Kobayashi were insoluble, a specialized NMR technique known as Solution Resolution Magic Angle Spinning (SR-MAS) was used. This technique was developed in 1997 and works by rapidly spinning the sample at an angle of 54.7 degrees (called the “Magic Angle”) in the magnetic field. Normally, anisotropic interactions modify the nuclear spin energy levels (and hence the resonance frequency) of all sites in a molecule, and can cause considerable line-broadening in the NMR spectra of solids. 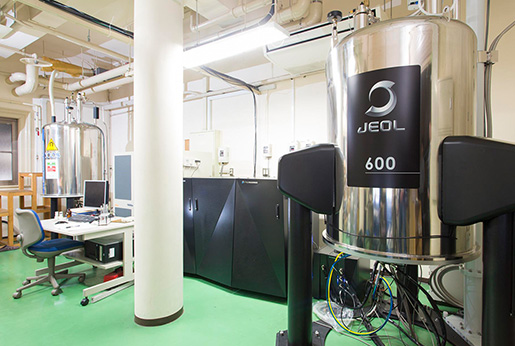 By rapidly spinning of the sample at the “Magic Angle”, these interactions are averaged out to suppress the broadening of the NMR spectra. In addition, inducing the surface of a solid catalyst into a gel can improve the movement of molecules so that relatively sharp spectra, similar to those obtained from liquids, can been measured. Currently, advanced variant of MAS, (FG-MAS, Field Gradient Magic Angle Spinning) is further contributing to understanding of high performance solid catalysts.
The solid state NMR measurements, conducted by the Kobayashi group, were carried out on a JEOL JNM-ECZ600R instrument. 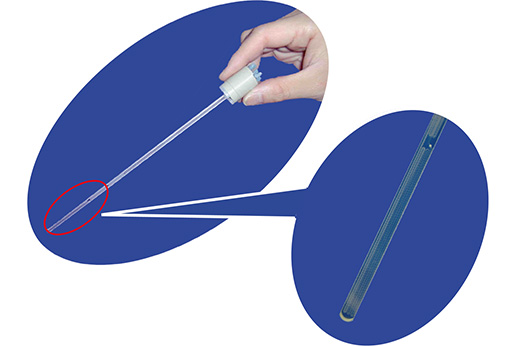 However, in order to design new reaction processes, a method to measure the state of the catalyst and products of the reaction in real time is required.
This was achieved using JEOL’s unique MICCS (MIcro Channeled Cell for Synthesis monitoring) device. This devise enables NMR measurements of a reaction mixture to be made inside the NMR probe using individual syringe pumps that introduce each of the reagents, and the changes of molecular structures inside the probe can be monitored over a period of time.
Prof. Kobayashi explained that, “As the number of processes in the flow synthesis increases, the necessity to observe the reagents and the catalyst in real time also increases. As the number of molecular structures that are measurable by NMR increases, we will be able to synthesize more complex compounds”.

Towards harmony between the environment and chemistry

Prof. Kobayashi aims to further develop the flow synthesis method, and will attempt to establish a pilot plant through the co-operation between industry, government, and university. This will allow interested groups to experience the advantages of flow synthesis by offering the use of the plant.
Prof. Kobayashi is also working towards the development of a technology to safely transport hydrogen gas. Hydrogen, which is highly flammable and explosive, can be transported quite safely if it is reacted with toluene to form a stable substance, methylcyclohexane. Prof. Kobayashi has been trying to develop a sold catalyst to efficiently extract hydrogen from methylcyclohexane.
“Water is the only thing that a fuel cell produces. If we can develop a catalyst that can extract hydrogen from water using solar energy, it will be an energy that does not impact on the environment. I would like to contribute to society not only for the sake of the environment but also for the welfare of human beings, health, and energy, through chemistry”.