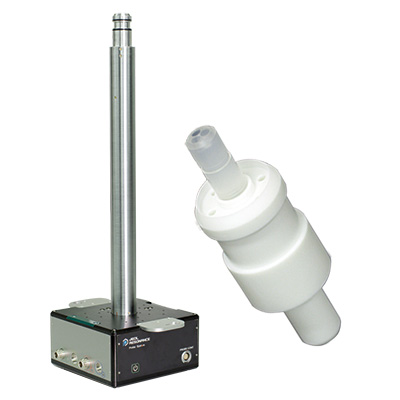 ◆Click the play button in the above box to watch the video. (4 min.)◆

The JEOL AUTOMAS probe provides a breakthrough system for liquid NMR probe users who may have felt that it is troublesome to use solid NMR probes.

The AUTOMAS probe has the following features:

Probe exchange that was required in solid state NMR measurements becomes unnecessary. By setting a solid sample tube housed in the ROTORCARRIER™ having the same appearance as the rotor used for the liquid sample tubes, samples can be smoothly loaded and ejected from above the magnet via the ROTORCARRIER™ without touching the probe in the same way as using the liquid samples.

The AUTOMAS Probe has the ability to use the existing Auto Sample Changer as is*2 . Continuous automatic measurements are possible just by setting the ROTORCARRIER™ loaded with the solid sample tube in a slot of the Auto Sample Changer, and specifying measurement conditions, such as pulse sequences, sample spinning speed, and temperature, on the Delta NMR software in the same fashion as the liquid-state NMR measurements.

Sample is loaded from any slot of auto sample changer.