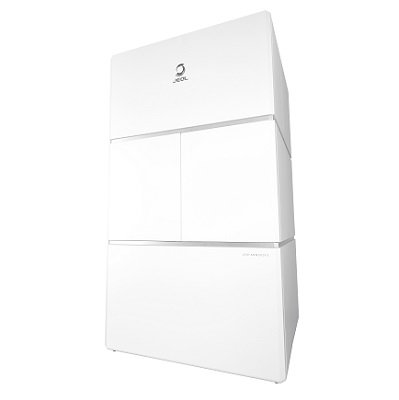 A New Atomic Resolution Electron Microscope has been released!
The "GRAND ARM™" has been upgraded.
This new "GRAND ARM™2" enables observation at ultrahigh spatial resolution with highly sensitive analysis over a wide range of accelerating voltages.

The FHP objective lens pole piece, for observation at ultrahigh spatial resolution, has been upgraded.

*This is the case when the STEM Expanding Trajectory Aberration (ETA) Corrector is incorporated.

The WGP, which has a wide gap between its upper pole and its lower pole, is also available.

Because of a wide gap , the WGP enables,

Cs correctors developed by JEOL are used on the GRAND ARM™2.

An enclosure not affected by external disturbances

This new enclosure is standard in order to reduce external disturbances such as air flow, changes of room temperature and acoustic noise.