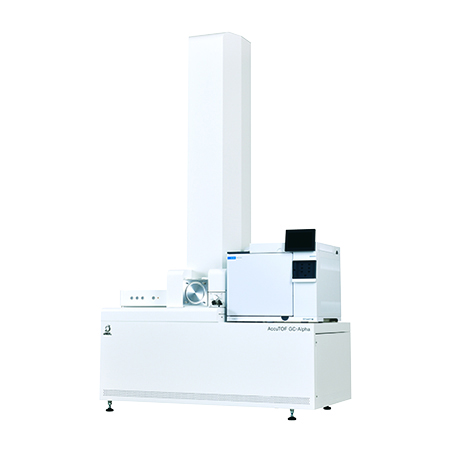 The Alpha takes you to a new world of mass spectrometry.
Introducing JMS-T2000GC "AccuTOF™ GC-Alpha", the ultimate GC-MS with superior performance and ease of operation.

Click the "replay" button in the box above, and the movie will start (for 4 minutes).

The Resolving power of a time-of-flight mass spectrometer is calculated according to the formula above. With this equation in mind, the new JMS-T2000GC AccuTOF™ GC-Alpha hardware was designed to achieve ultra-high resolution using the following principles:

With the newly developed hardware, the AccuTOF™ GC-Alpha features 6 times higher resolution than the first generation AccuTOF™ GC and has a mass accuracy of ≤ 1 ppm.

High performance for both qualitative and quantitative analysis

The AccuTOF™ GC-Alpha is truly a high-performance GC-MS system that removes the limitations for chemical analysis.

Eight sequential measurements of 100 fg of octafluoronaphthalene (OFN) were obtained by using the standard EI ion source.
The instrument detection limit (IDL) is calculated based on the peak area and reproducibility of the extracted ion chromatogram for the molecular ion. An IDL of 18.7 fg was achieved for the system.

OFN at concentrations ranging from 0.1 to 1,000 pg/uL (4 orders) were measured using the standard EI ion source and a high degree of linearity was confirmed. The wide dynamic range is useful not only for quantitative analysis but also for qualitative analysis of complex mixtures with different concentrations.

For GCxGC and Fast GC analyses, the chromatographic peaks are very narrow, thus requiring a mass spectrometer that supports high-speed data acquisition. The AccuTOF™ GC-Alpha is a good match for these advanced chromatographic techniques because it can acquire data at up to 50 spectra per second. 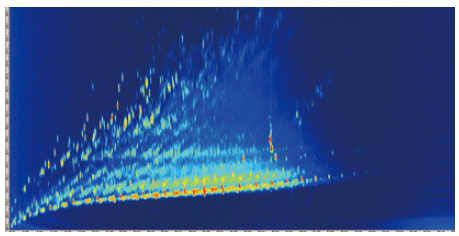 One of the features of time-of-flight mass spectrometers is their ability to measure a wide mass range. The upper limit of an ordinary GC-MS instrument is typically around m/z 1000, while the AccuTOF™ GC-Alpha can detect m/z 6000 and higher. This makes it possible to use direct probe MS methods such as field desorption (FD) to measure samples like oligomers. 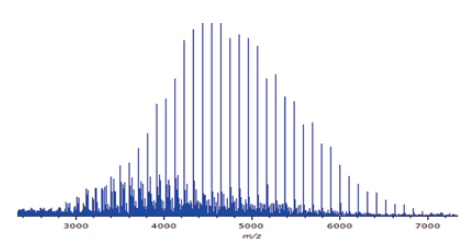 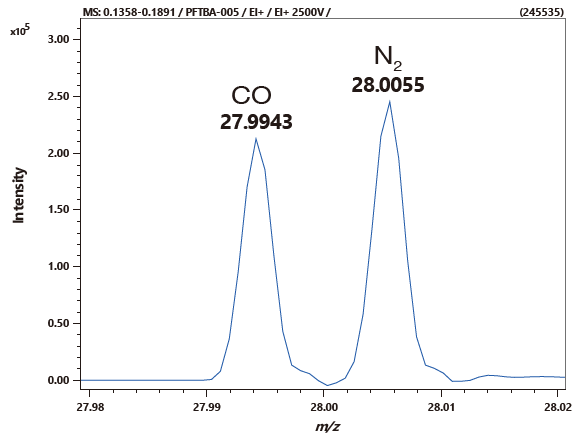 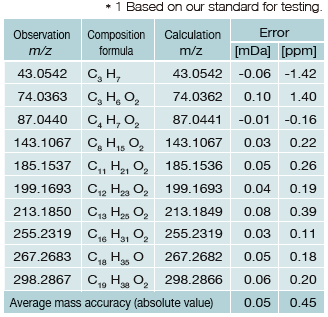 EI, the most widely used ionization technique in GC-MS, is superior in sensitivity and reproducibility and is supported by a variety of library searchable databases.

For any scientist using GC-MS in search of further information, what is ultimately important is molecular ion detection. EI, which uses a high ionization energy of 70 eV, generates numerous fragment ions, from which structural information is acquired. However, EI often fails to show strong molecular ion signals. Consequently, qualitative analysis results may be incorrect if they solely rely on database searches. 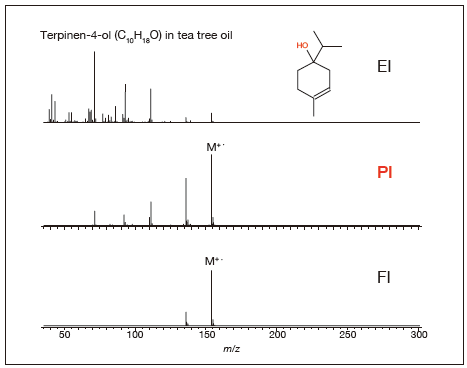 FI and FD are extremely soft ionization techniques that provide lower internal energy to the analytes than EI and even CI, thus producing clear molecular ions.

As a result, FI and FD are ideal for molecular weight determination.

In FI and FD, ionization occurs by the removal of electrons from neutrals via the action of a high electric field. 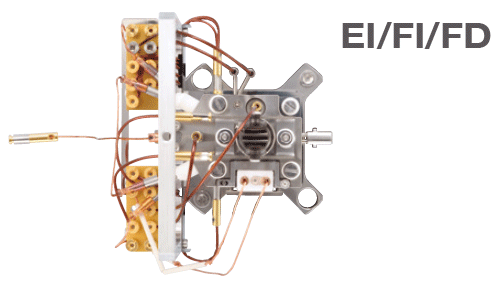 Switching between EI and FI/FD is simple and quick.

The following analyses are possible by using this combination ion source with GC: 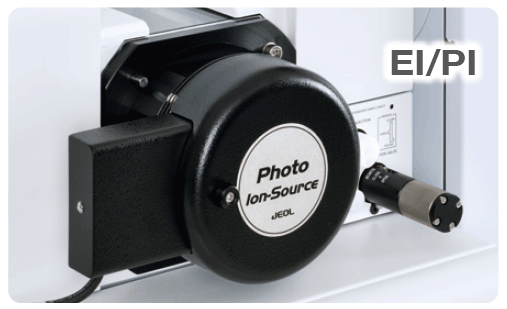 PI is an ionization method that uses photons from a vacuum ultraviolet (VUV) lamp for ionization. The AccuTOF™ GC-Alpha has an optionally available combination ion source that offers both EI (hard ionization) and PI (soft ionization). This source makes it possible to switch between EI and PI by simply turning on/off the EI filament as well as the PI lamp. 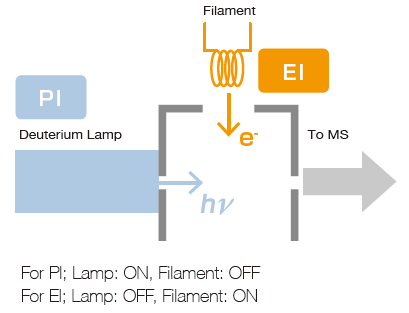 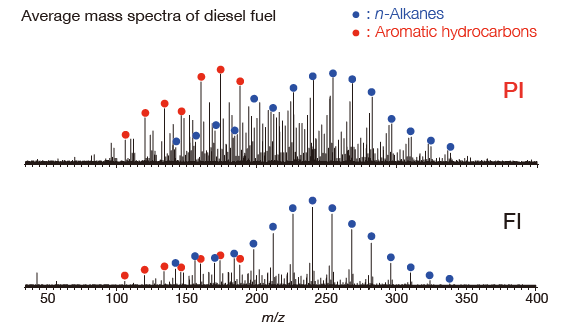 PI is particularly useful for the analysis of aromatic compounds in complex mixtures. These compounds produce high intensity peaks with PI because they strongly absorb UV light.

Since its introduction in 2018, the msFineAnalysis software for the AccuTOF™ GC series has been well received as an innovative software solution for the automatic qualitative analysis of unknown compounds.

This software makes full use of the high-quality data obtained by the AccuTOF™ GC-Alpha, thus providing a new approach to qualitative analysis for identification of unknown compounds.

Version 3 of msFineAnalysis streamlines the software operation and adds a new function in which 2 similar samples can be directly compared for differential analysis. This new, enhanced version of msFineAnalysis allows the operator to easily accomplish qualitative analysis of unknown compounds as well as for compounds that are unregistered in the EI mass spectral libraries.

msFineAnalysis provides quick and efficient data analysis so that the user can spend less time analyzing data and more time on research and creativity!

Direct MS mode is useful for the analysis of high-boiling-point and high-mass compounds that are not amenable for GC.

Compounds that are measured by GC normally have molecular weights below 500 Da so it is not common to target compounds with molecular weights exceeding 1000 Da by using GC-MS. However, in direct MS mode (no GC is used), high-boiling-point, high-molecular-weight, and nonvolatile compounds can be targeted for measurement, as the sample is directly introduced into the ion source. The mass range of the AccuTOF™ GC-Alpha is m/z 6,000 or higher. Since compounds can be detected over a wider mass range than conventional GC-MS, the system is well suited for measurements in direct MS mode. 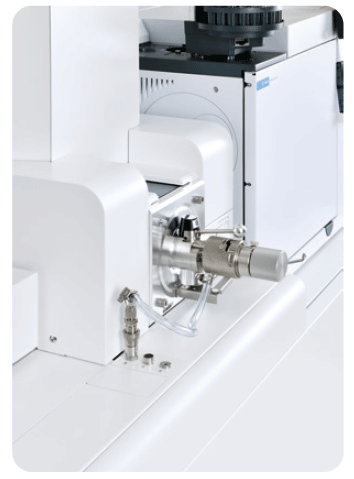 FD is an ionization method in which the analyte molecules applied to the emitter are desorbed and ionized by a high electric field. The electric current running through the emitter is gradually increased during the measurement to heat the analyte to assist desorption/ionization. Since the optimum emitter current for ionization depends on the analyte, components can desorb at different times. Separation of components in a mixture is possible, and mass spectra for a specific class of compounds can be extracted. Furthermore, even when compounds are not separated in time during desorption/ionization, each other, target components can still be clearly separated by creating KMD plots. 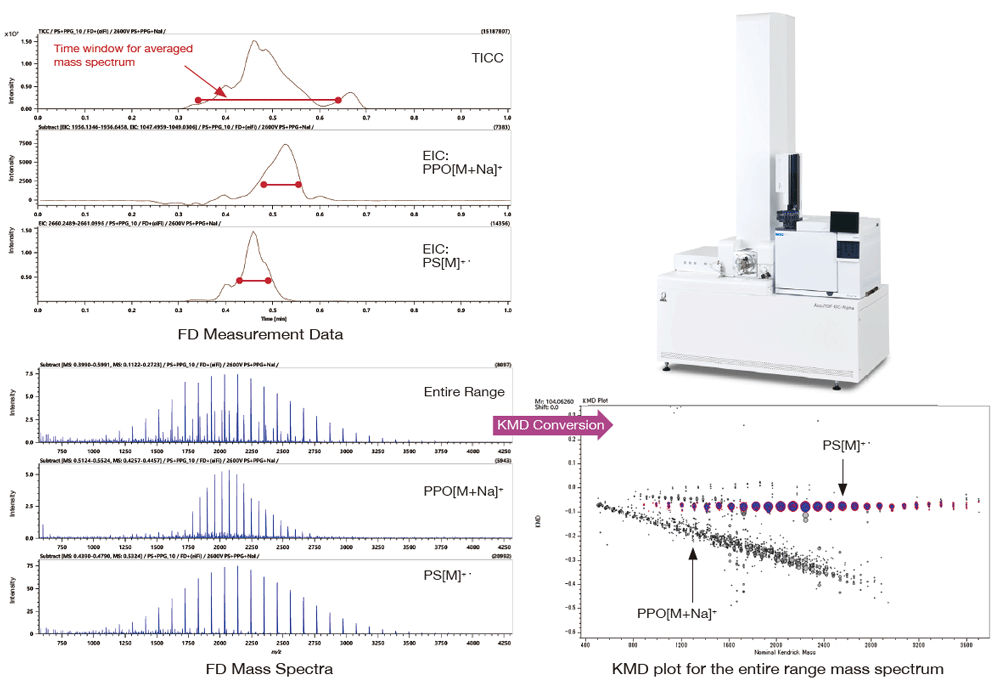