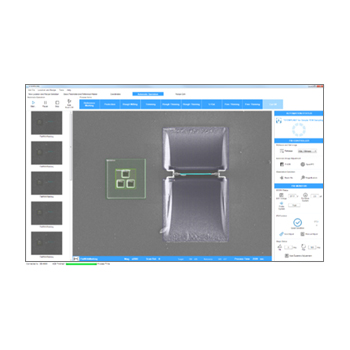 Automatic TEM Specimen Preparation System STEMPLING is software for automatic TEM specimen preparation by using FIB. This system was developed to satisfy the needs for specimen preparation using FIB, such as easy operation that is possible to anyone, and for the technology enabling creation of a large number of specimens. Owing to STEMPLING, high expert skills are not needed for specimen preparation, enabling anyone to easily prepare specimens. Also, since the system allows for unattended preparation of multiple specimens, work efficiency can be optimized via overnight operation to create a large number of specimens.
STEMPLING can be used with the Multi Beam System JIB-4700F and the Focused Ion Beam Milling & Imaging System JIB-4000PLUS.

Various specimens can be prepared with an easy setting

Standard recipes are provided to prepare 6 kinds of specimens such as a TEM specimen and a cross-sectional specimen.
It can be utilized in various scenes of specimen preparation using FIB.

Multiple specimens can be prepared by automatic processing

With an automatic eucentric adjustment, it is possible to automatically prepare specimens stably, even from materials that have uneven surfaces or different heights.
Fig. 3 shows the thin film specimen prepared by using an uneven surface specimen that has a step of about 70µm.
The thin film specimens were made correctly at the upper part and the lower part of the step.