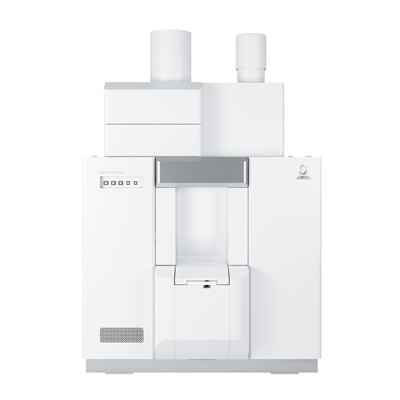 The JMS-S3000 is a MALDI-TOFMS* that incorporates the innovative SpiralTOF ion optics.
The JMS-S3000 has evolved into SpiralTOF™-plus 2.0 with much wider dynamic range. The JMS-S3000 defines a new standard in MALDI-TOFMS performance and provides state-of-the-art analytical solutions for a wide range of research areas such as functional synthetic polymers, materials science, and biomolecules.

To improve the mass resolving power and mass accuracy of a time-of-ﬂight mass spectrometer, the ﬂight distance must be extended while keeping a group of ions having the same m/z (an ion packet) from diverging in space.
The innovative SpiralTOF ion optics was developed by JEOL based on the "Perfect focusing" and "Multi-turn" principles. The ion packets are focused back in space at every ﬁxed distance (i.e., each ﬁgure-eight trajectory) during the ﬂight. Thus, even after the extended ﬂight distance, the ion packets do not diverge at the detection plane, achieving high mass resolving power, high mass accuracy, and high ion transmission. 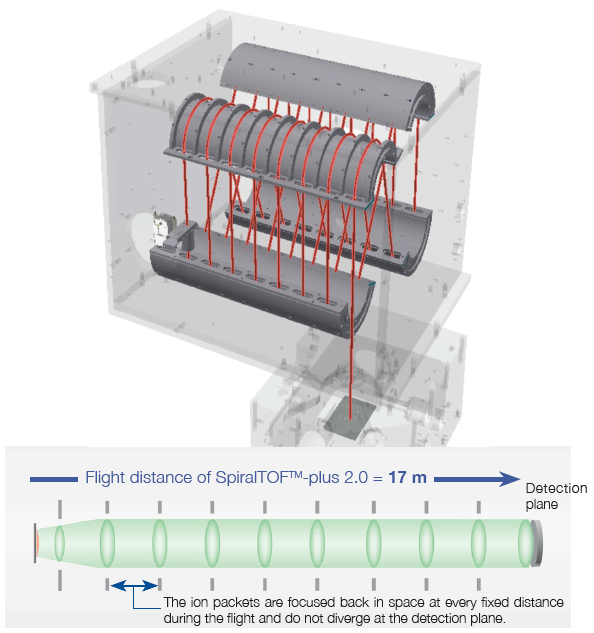 Mass resolutions observed with a mixture of peptide standards. 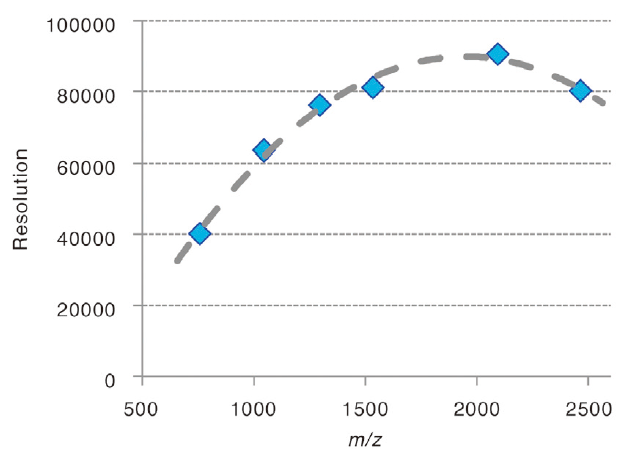 The topographic effect of the matrix crystal leads to a difference in flight start position for the ions, resulting in a difference in flight time. In the conventional ion optical system, this time difference degrades the mass resolving power and also the mass accuracy obtained with external mass calibration. With its extended flight distance, the JMS-S3000 reduces this effect to the minimum and achieves highly reproducible mass resolving power and high mass accuracy with an external mass calibration. High mass-resolution and mass accuracy can be maintained for imaging analysis of a biological specimen in which a large number of mass spectra are acquired across a large area and the specimen surface is likely to be uneven. 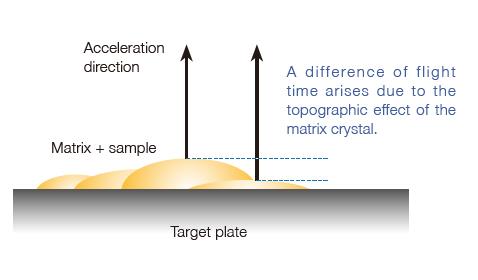 The SpiralTOF™-plus 2.0 has realized a wide dynamic range by greatly improving the detection system. This makes it possible to simultaneously detect peaks with ion intensity diﬀerences of about 4 orders of magnitude. Also, the analysis of trace components has become easy in mass spectrometry imaging measurements, in addition to the conventional bulk sample measurements. Below is the measurement example of a mixture of polyethylene oxide and polypropylene oxide in the ratio of 1,000:1. In the case of polymer analysis, when combined with the Kendrick Mass Defect (KMD) analysis, it is possible to analyze trace components that are otherwise diﬃcult to detect.

The mass spectrum of a mixture of polyethylene oxide and polypropylene oxide in the ratio of 1,000:1.

The SpiralTOF™-plus 2.0 can realize a wide dynamic range and calculate the molecular weight distribution of trace components. 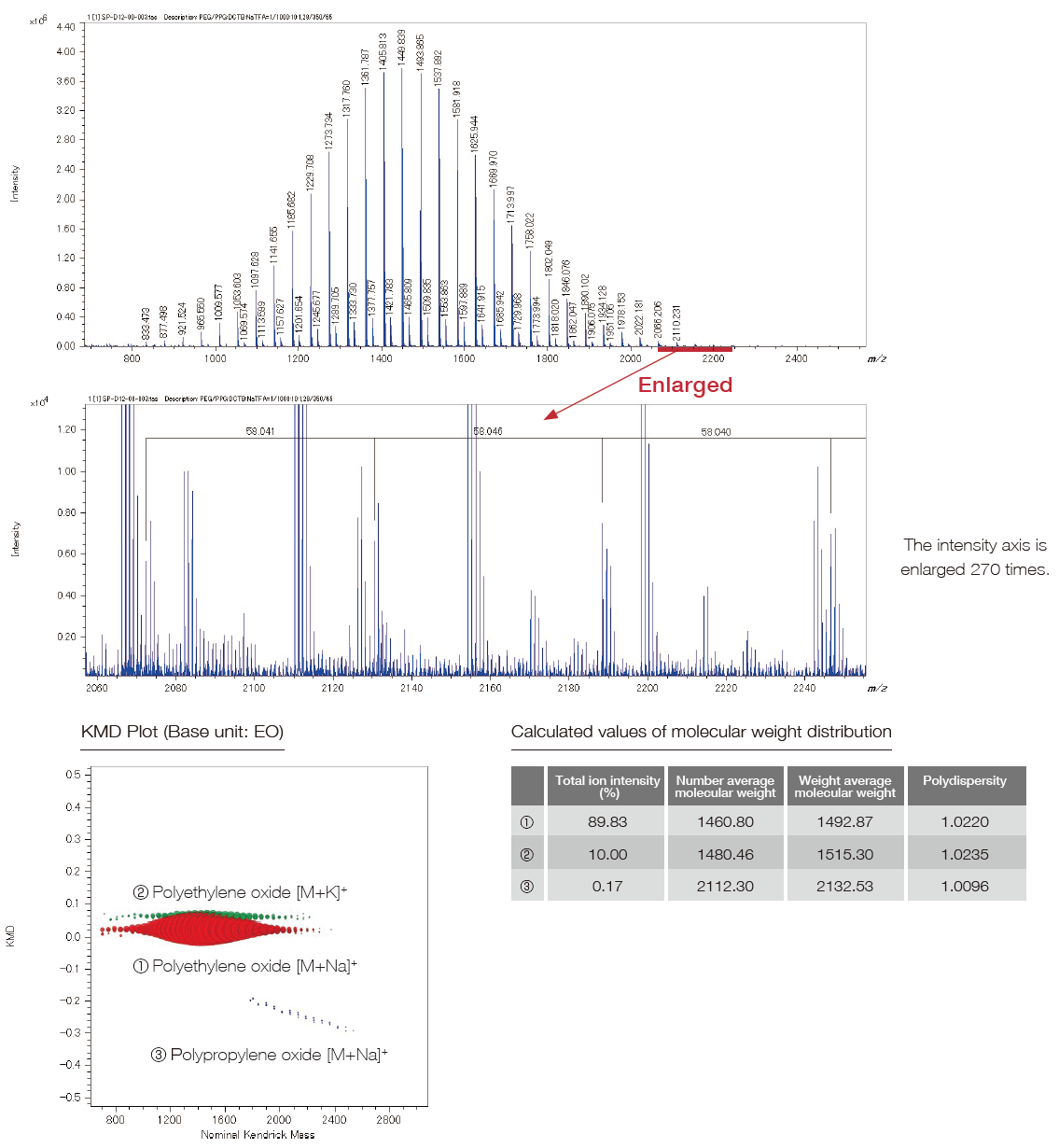 Features and usages of TOF-TOF option and linear TOF option 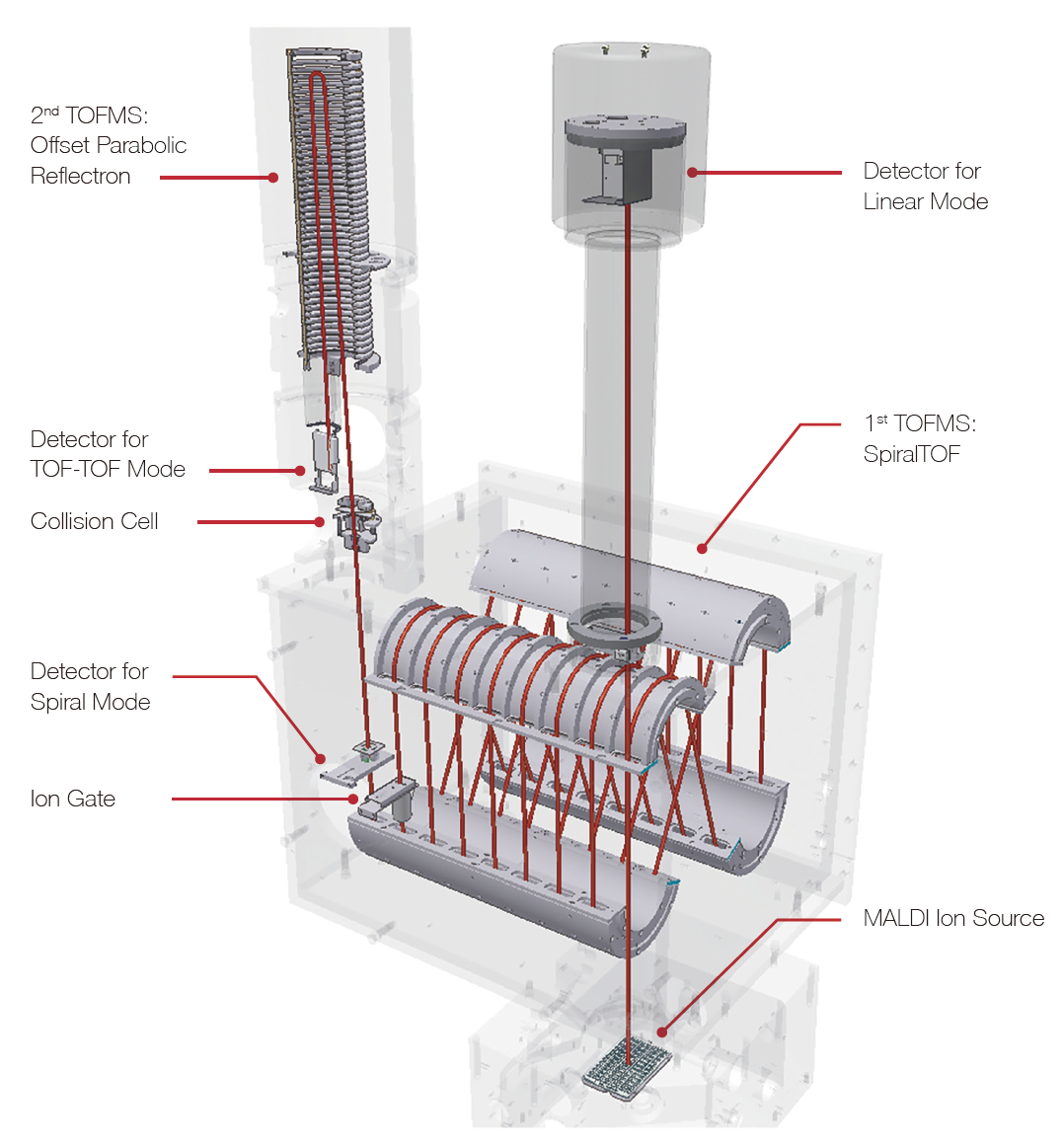 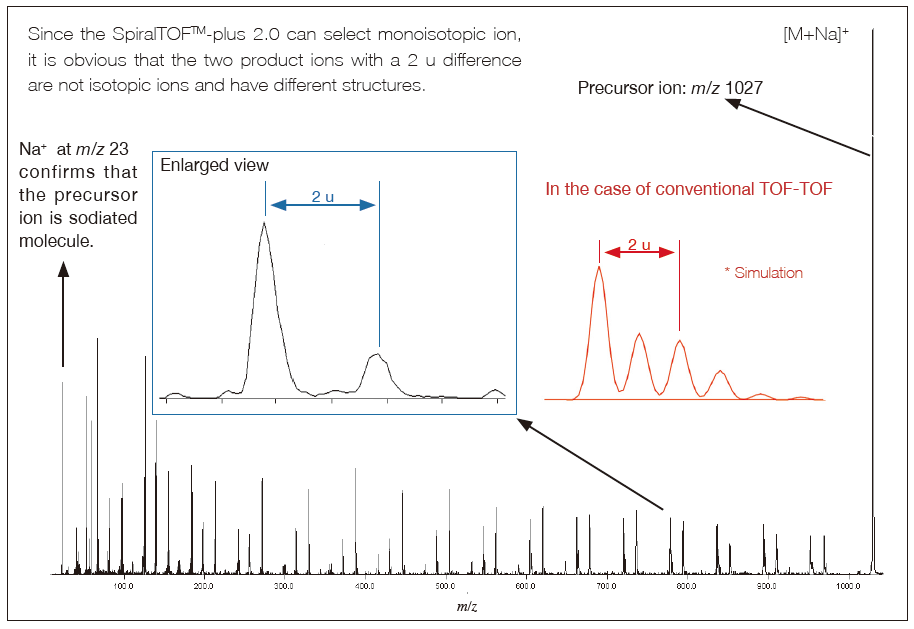 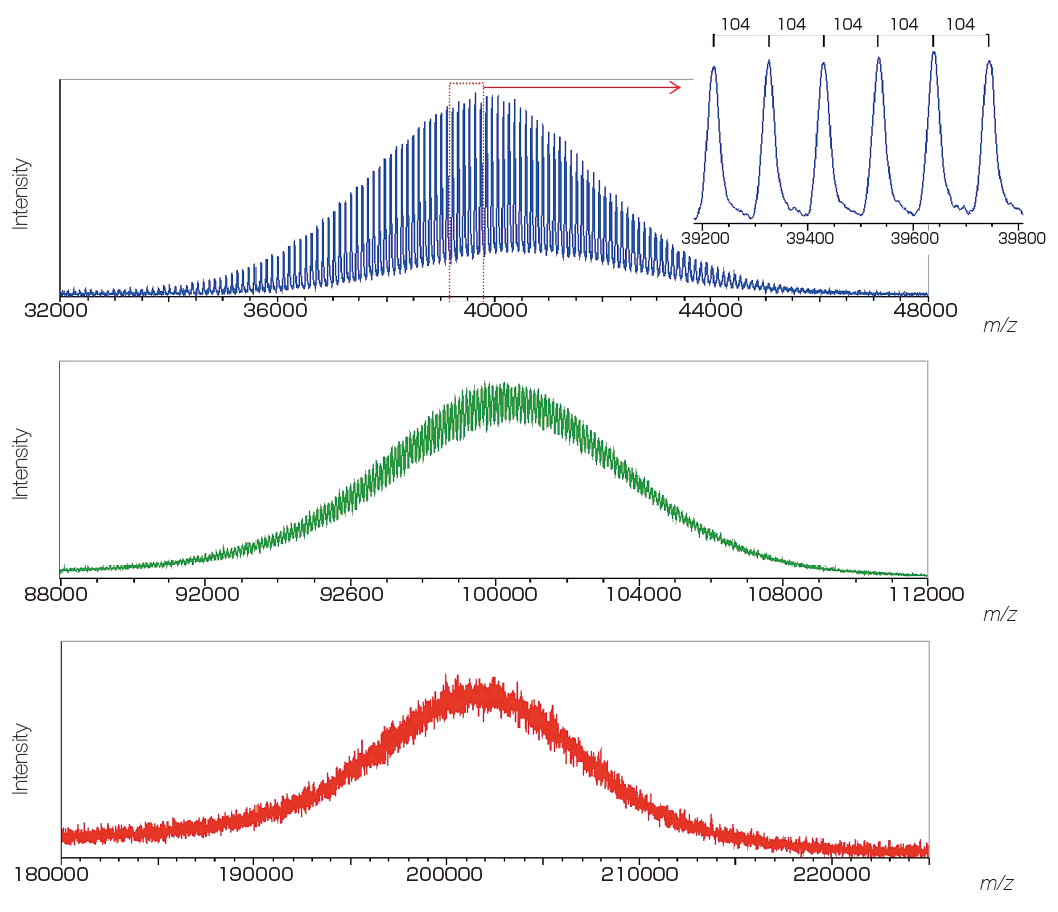 SpiralTOF™-plus 2.0 is Ideal for Polymer Analysis

Industrial polymeric materials based on mixtures of polymers with different end groups or copolymers contain a wide variety of compounds. It is necessary to detect all the components in order to grasp the whole picture, which requires ultra-high mass resolution in a wide mass range. In addition, it is important to detect not only the base material but also trace components because multiple types of polymers and trace additives are blended for higher functionality.
With its wide dynamic range and ultra-high mass resolution over a wide mass range, SpiralTOF™-plus 2.0 is the solution that meets these requirements. Elimination of post source decay (PSD) derived ions, which is a major feature of SpiralTOF ion optics, also contributes significantly to clear mass spectrum analysis.
We provide the most effective and unique solution for polymer analysis, which has become more and more complicated in recent years due to its high functionality and recycling.

Mass spectrum of polymethylmethacrylate (PMMA) (m/z 2,000 – 9,000)
The SpiralTOF™-plus 2.0 achieves high mass resolving power over a wide mass range which is required for the analysis of polymers. 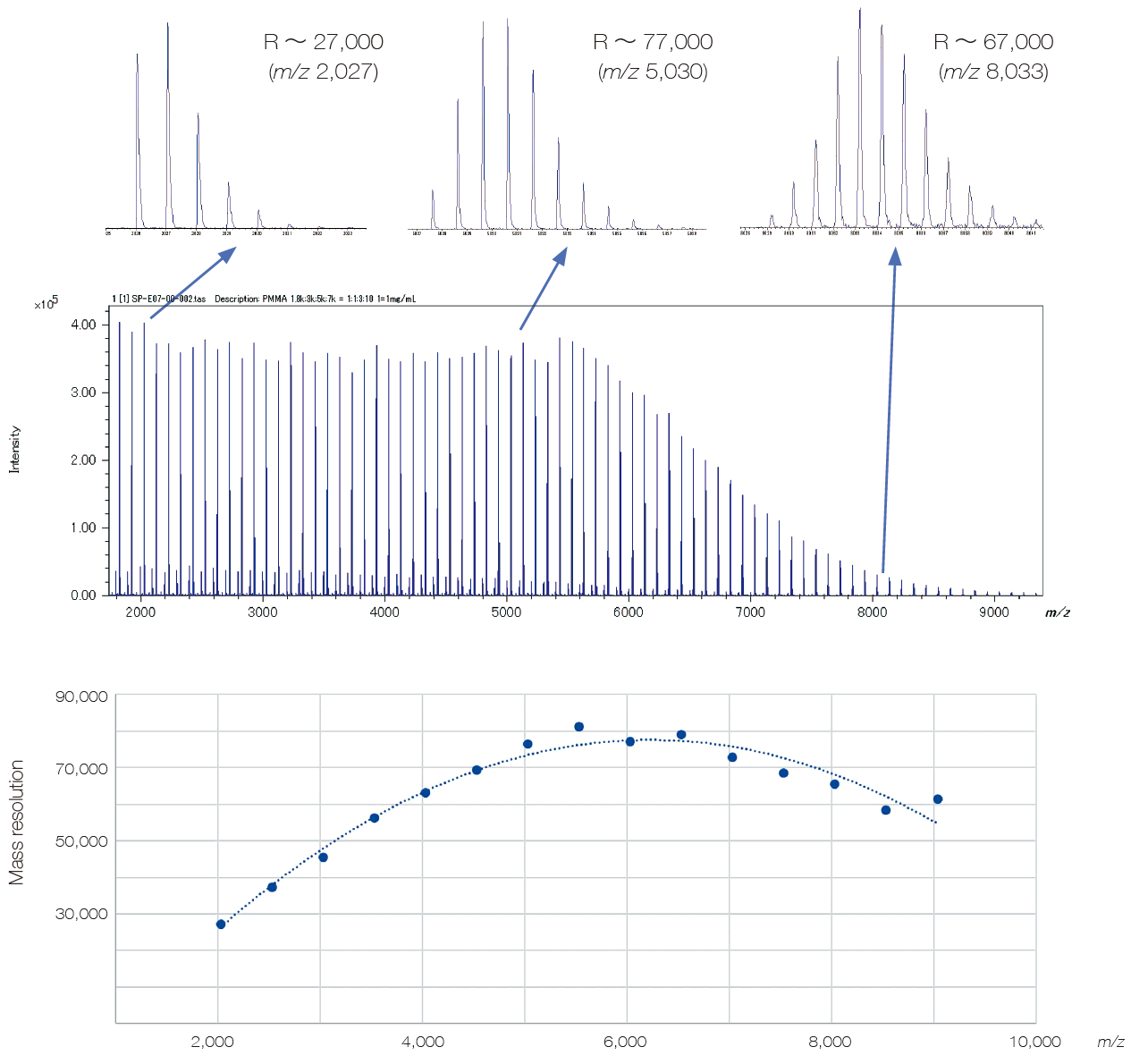 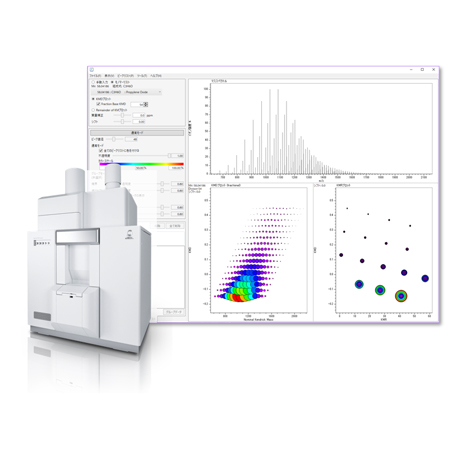 The Kendrick Mass Defect (KMD) plot and the Kendrick Mass Remainder (KMR) plot are used to estimate the polymer species and end groups contained in polymer materials from a complex mass spectrum and clarify their identity. In addition, the differential analysis function between two samples is effective in verifying sample degradation, lot-to-lot differences, and differences in the synthesis process.

MALDI MS imaging was initially developed to focus on high molecular weight compounds such as proteins and peptides. However, with the expanding applications of MALDI MS imaging, the interests have shifted to include smaller molecules such as lipids, pharmaceuticals, and pharmaceutical metabolites. Conventional MALDI - reﬂectron TOFMS has diﬃculty discerning small molecule signals from those of matrix. In the case of MALDI MS imaging, signals from unwanted molecules on the specimen surface will often interfere with signals from the target analytes. High selectivity by means of high mass-resolving power is essential for obtaining reliable target analyte spatial distributions. It is also important to maintain high mass-resolution and mass-accuracy for a long time even when measuring a sample surface with a large area and non-uniformity. SpiralTOF™-plus 2.0 is the only MALDI-TOFMS that meets imaging requirements with ultra-high mass-resolution and long flight distance to minimize loss of mass resolution due to sample surface non-uniformity. In addition, it also supports high-speed mass imaging analysis. 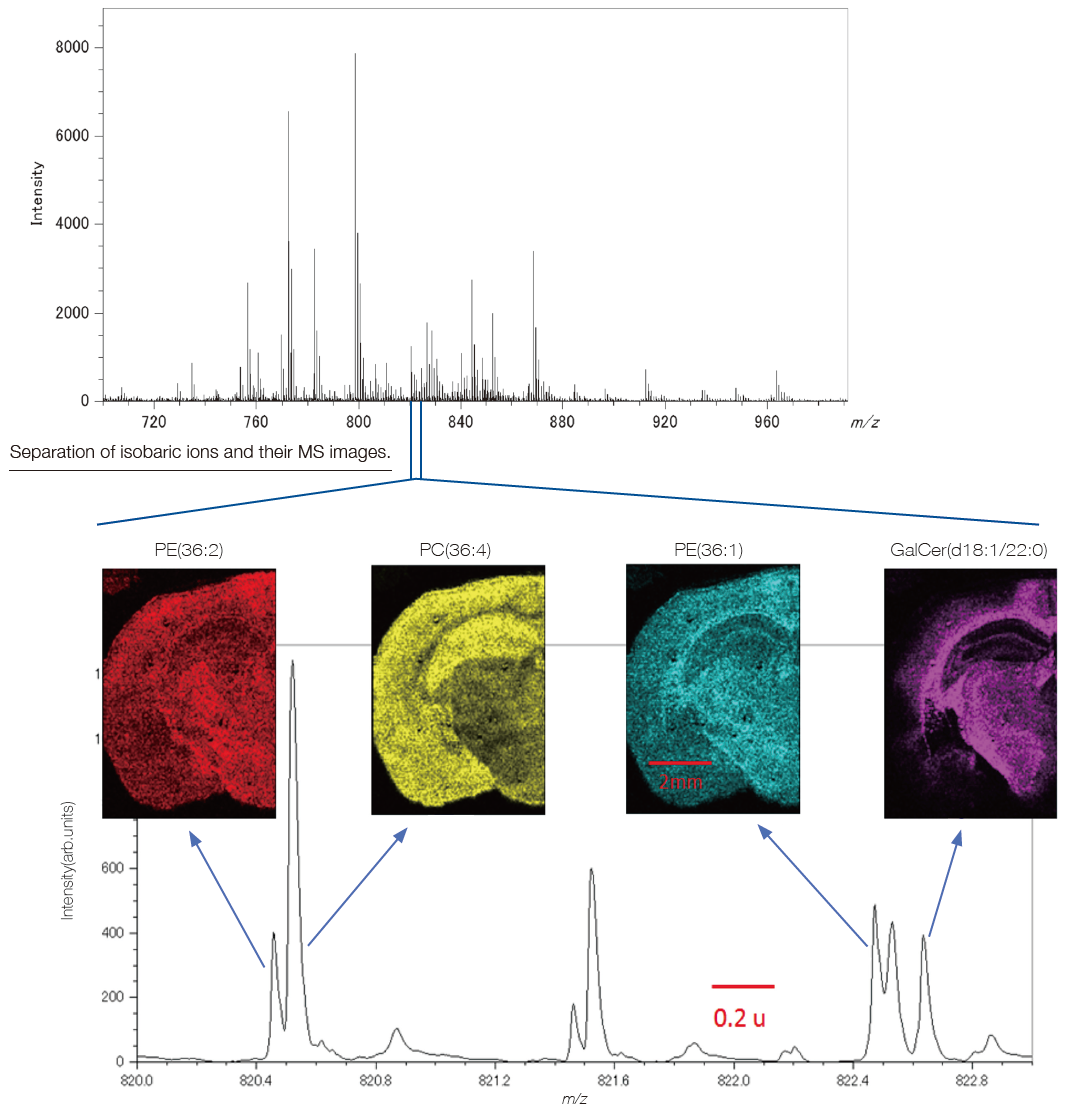 Mass spectrometry imaging can be applied to polymers. Two spots are prepared by adding two antioxidants - Irgafos 168 (BASF) and Irganox 1010 (BASF) - to polymethylmethacrylate (PMMA). The ultraviolet irradiation was performed to the right spot only and its degradation was visualized by using mass spectrometry imaging. For polymers, it is possible to visualize the quantitative change in both polymers and additives. It is also possible to capture the changes in the average molecular weight and polydispersity. 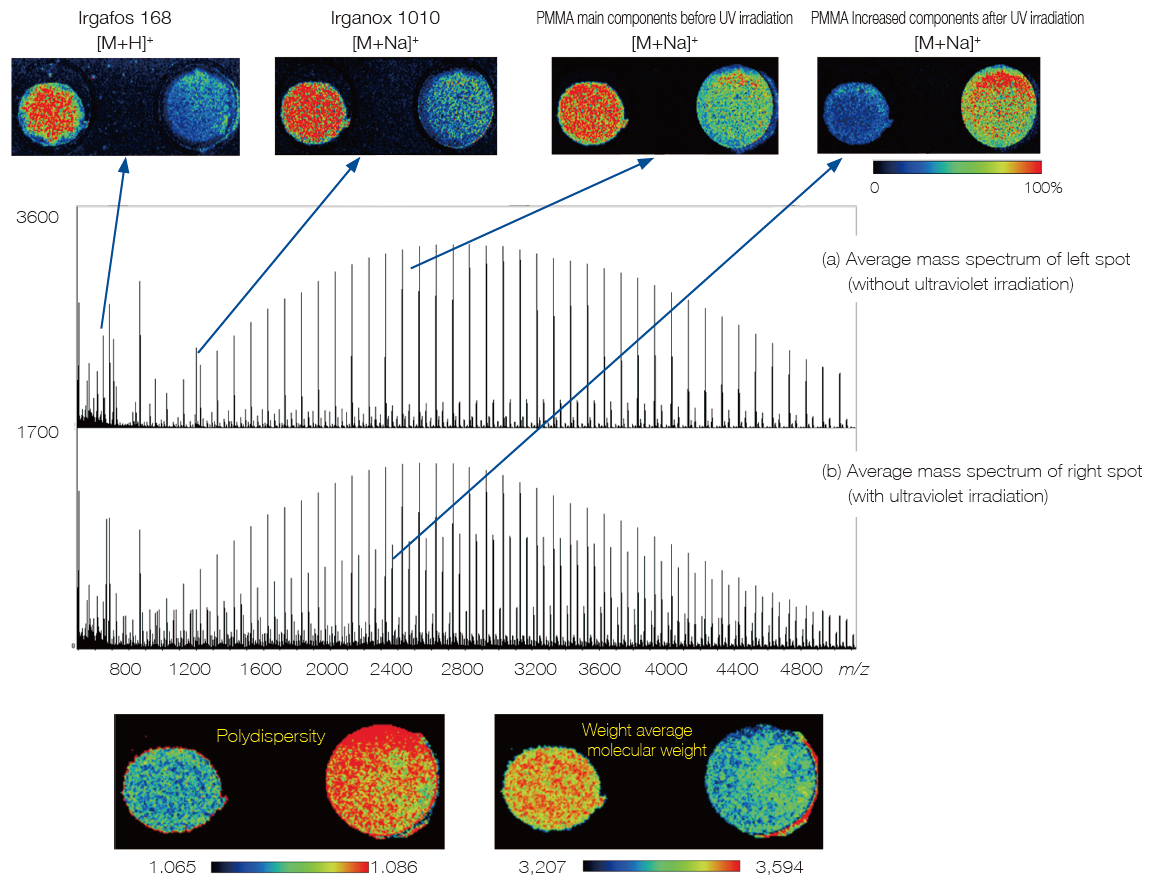 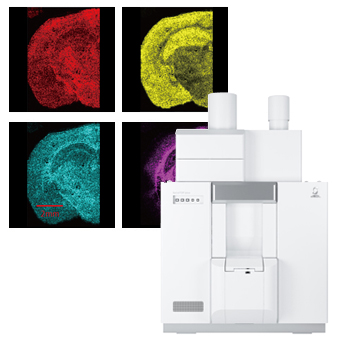 For the detailed analysis of a protein, not only the intact protein but also enzymatic digest of the protein can be analyzed. Peptide mass ﬁngerprinting allows identiﬁcation of a protein.

Mass spectrum of the tryptic digest of bovine serum albumin (BSA) and the results of the peptide mass fingerprinting.

Previously, MALDI-TOFMS systems were not suitable for the analysis of small molecules as matrix-derived peaks and continuous chemical noise interfere with the signal from analyte molecules. The SpiralTOF ion optics have solved these problems.

Analysis of a common cold medicine 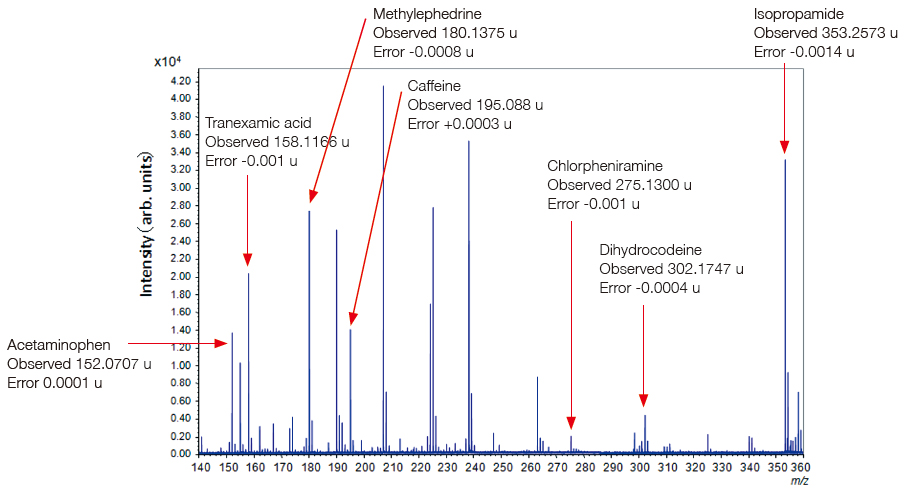