Every month, 1,000-1,200 packages of evidence come into the Central Controlled Substances Lab at the Virginia Department of Forensic Science. They come in many forms--white powders, snippets of plant material, capsules, tablets--often with multiple specimens for testing in each package. Sometimes it's just syringes, scales, pipes or other drug paraphernalia. All of these samples are evidence in suspected drug cases, and it's up to Bob Steiner and his colleagues to identify them.

"You don't know what you have. That white powder could be cocaine. Then again, it might be cornstarch or sugar. The capsule could be the latest designer drug, an illegal pharmaceutical or an offshore counterfeit. The trick, "Steiner says, "is to be able to understand the data that you're getting."

With so many samples and so little time to process them, Steiner's lab has to be able to generate analytical data quickly, with maximum confidence in the results. That's where the JEOL AccuTOF-DART mass spectrometer comes in.

For starters, the AccuTOF-DART is faster--a lot faster--than other analytical methods such as chromatography, LC-MS or GC-MS typically used in forensic analysis. Start to finish, an analysis takes about 10 minutes, compared to 45 minutes or more for other methods. Steiner explains, "There are quick ways to screen total unknowns using chromatographic techniques, but you really don't know the identity of the compounds you're seeing. The AccuTOF-DART allows you to discover the compounds present and immediately determine what standards are needed to compare for final confirmation of the drugs."

It's simpler, too. It's possible to immediately determine chemical composition and produce high-resolution, accurate mass spectra simply by placing a sample, in its native form, between the DART ion source and the AccuTOF mass spectrometer inlet. 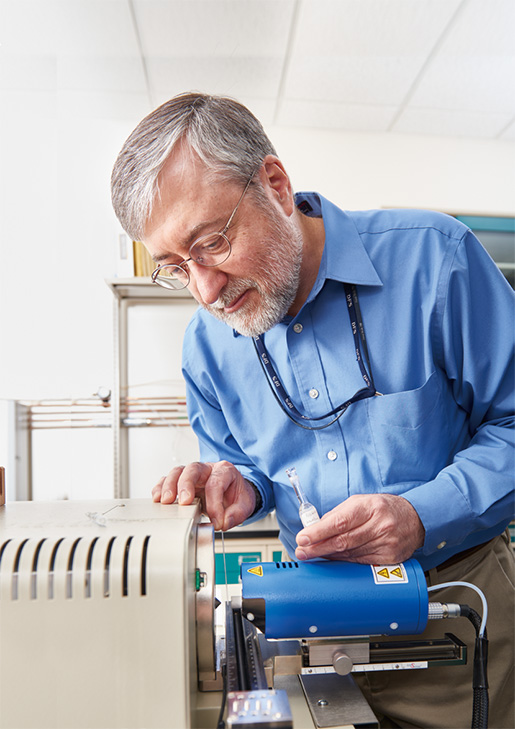 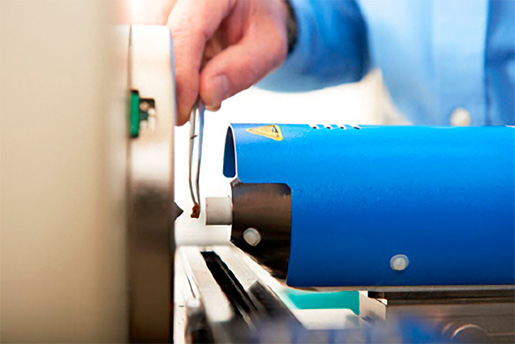 With more than 30 years' experience as a drug chemist and mass spectrometrist, Steiner has been an active pioneer in the use of DART technology for forensic analysis. He was present at the "birth" of the instrument when co-inventor Dr. Robert (Chip) Cody, JEOL USA, Inc., presented it at the 2005 Sanibel Conference, and remembers thinking, "If this technology could do half of what he says, it will revolutionize what we do."

As it turns out, it has.

Powerful weapon in the war against "designer drugs"

In addition to the more common drugs of abuse, Bob Steiner's lab has been seeing more designer drugs in recent years. They've become a significant part of the case load, and the team is doing everything possible to stay a step ahead of the law-breakers.

Designer drugs are structural or functional analogs of controlled substances that mimic the pharmacological effects of the original compounds. They are specifically created to evade existing drug laws, and are extremely dangerous because they are unregulated, untested, and of unknown origin. The most common designer drugs are created by modifying an existing drug’s chemical structure, but many are also synthesized as totally new formulations.

Historically, most designer drugs have been either opioids, hallucinogens, or anabolic steroids--so-called "recreational" or performance-enhancing drugs. However, the list has grown to include designer stimulants, designer sedatives, and even designer sildenafil (Viagra®). In fact, the worldwide black market for counterfeit pharmaceuticals is now estimated to be more than $200 billion.

Using the AccuTOF-DART, Steiner is able to quickly and confidently compare suspected designer drugs against a comprehensive in-house reference library that includes mass spectra and structural information for more than 2,300 compounds. When new designer drugs appear on the market--sometimes as many as several each week--the data is added to the library.

"This can be an extremely powerful tool," Steiner says. "We recently received a notice of a new Schedule I (i.e., no medical use, high addiction and abuse potential) drug from Germany, and added it to our library. Two weeks later, a sample came through our lab that matched the profile exactly! Thanks to the richness of data from the AccuTOF-DART, we were able to identify it, something we couldn't have done using a traditional GC-EI-MS instrument alone."

Often marketed as “safe,” legal alternatives to marijuana, so-called “Spice” products are a designer drug subset that contain synthetic cannabinoid compounds. Manufacturers attempt to evade legal restrictions by substituting different chemicals in their mixtures. These compounds--and there are literally hundreds of them--are also a fast-growing part of the forensic workload.

Steiner explains, "The number of these drugs has skyrocketed, and we're seeing more of them all the time. With the internet, it's easy for garage chemists to find articles about how to make them. So they change the structure slightly, add a fluorine here or a chlorine there--and now they have a new product. "The neat thing is that the AccuTOF-DART gives an accurate mass molecular weight. So we can develop the chemical formula from the mass, and then research the formula. We've been extremely successful using that approach, and would have been nowhere without the DART."

"The instrument has literally transformed the way we do our work."

Largely because of the successes in Bob Steiner's lab, three other Controlled Substances labs across the Commonwealth of Virginia will be getting new AccuTOF-DARTs. "It's a great step forward," Steiner says. "Since we got our AccuTOF-DART in 2006, the number of drugs we see has gone up exponentially, and it's become an incredibly important tool for us to have in this laboratory. It's made it easier to get our jobs done. And most importantly, it's given us the ability to keep up with all the changes."

How DART works
In DART, an electrical potential is applied to a stream of gas (usually helium or nitrogen), transforming it into a plasma, which is then fired at the surface of a sample placed in the gap between the ion source and the analyzer inlet. This converts atoms and molecules at the surface into ions, which are directed into a time-of-flight mass spectrometer (TOF-MS). Because DART is able to ionize samples out in the open air, it reduces or eliminates the need for any special sample preparation or solvents. 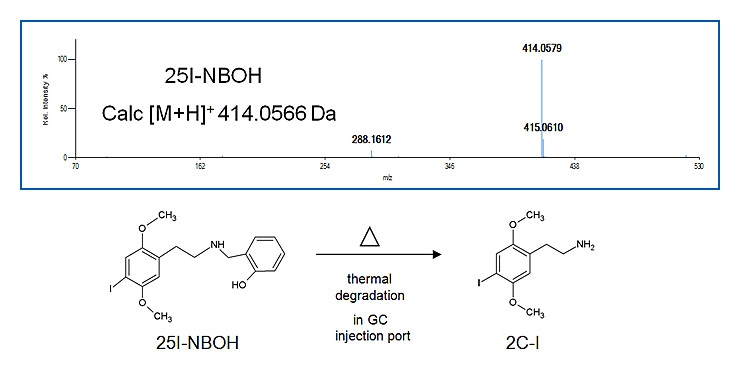 25I-NBOH, or 2C-I?
2C-I is a Schedule I street drug; 25I-NBOH is a much more potent designer derivative--currently without legal status in the U.S.--formed by adding an N-(2-hydroxybenzyl) at the amine. On the Accu-TOF-DART, the entire protonated 25I-NBOH molecule is clearly resolved, leading to a positive identification. Conducting the same analysis by GC-EI-MS, without a time-consuming derivatization step, would consistently misidentify the compound as 2C-I, due to thermal degradation in the higher temperature GC injection port. 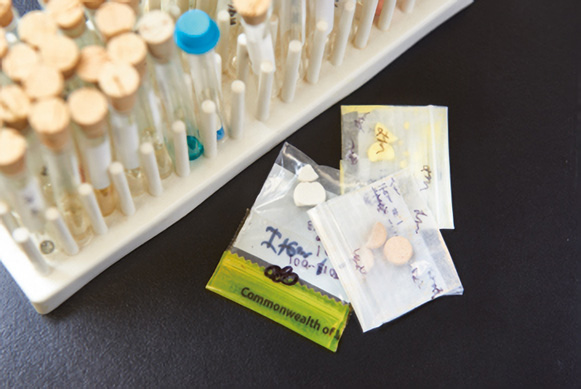 Novel confirmation technique for pharmaceuticals
Steiner's forensic lab gets 100 or more pharmaceutical samples every month for confirmation. "We get capsules and tablets all the time in our case work for suspected controlled substances. We're able to observe markings on the pill, search published databases of markings, go to the DART, and in 10 minutes we've confirmed the composition and the analytical work is done."