Advances in chemistry have led to tremendous benefits to society and have impacted nearly every aspect of our lives, including healthcare, energy, food production, and new materials. Although society has been enriched by this progress, the production of chemical substances has also created serious environmental issues, such as pollution and environmental contamination. At the University of Tokyo, Professor Shū Kobayashi is leading the way to develop environmentally friendly or “Green" chemistry.

Reproducing In Vivo Organic Synthesis in a Flask

“I want to eradicate the negative aspects of chemistry,” says Professor Shū Kobayashi of the University of Tokyo, a leading researcher in the field of “green chemistry.” Green chemistry refers to a new mode of chemistry that places an emphasis on harmony with the environment and aims to reduce waste generated through the synthesis of chemical substances and to minimize energy consumption, resource consumption, and the potential negative impact of chemicals on the human body and the environment. Without question, reducing environmental burdens is one of the critical challenges of the 21st century and the research of Professor Kobayashi has drawn a great deal of attention from domestic and international chemical and environmental communities.

Professor Kobayashi believes that in vivo reactions are ideal chemical reactions. In the human body, a countless number of chemical reactions ceaselessly occur with the aid of enzymes, but the solvents that dissolve materials in our bodies consist primarily of water. On the other hand, chemical factories and laboratories typically make use of organic solvents, such as toluene and acetone, for chemical synthesis. Such solvents pose high environmental burdens and are hazardous to humans, and must always be disposed with great care. In contrast, waste generated from biological reactions are biodegradable and are harmless to the environment. Professor Kobayashi points out that the in vivo system is an ideal model for an environmentally compatible chemical plant. The concept of replicating this more ideal organic synthesis in a flask was the beginning of Professor Kobayashi’s commitment to green chemistry.

One of Professor Kobayashi’s long-standing research themes is organic synthesis using water as an alternative solvent. Generally, raw materials for organic synthesis are mostly hydrophobic and do not dissolve in water. Moreover, metal catalysts that facilitate organic reactions often decompose when exposed to water. As such, it is the norm in organic synthesis to thoroughly eliminate water from the reaction vessel prior to its use. Using water as a solvent runs counter to conventional wisdom. The exploration of insoluble materials and their reactions, and the development of catalysts that do not decompose in water, required unprecedented research which initially resulted in a succession of failures.

“Many synthetic organic chemists are interested in the creation of new compounds rather than catalyst structures and reaction mechanisms. My interest was quite the opposite. I wanted to understand catalyst structures and reaction mechanisms. I believed that this would enable me to find ways to use water as an alternative solvent for organic reactions.”

After a great deal of trial and error, Professor Kobayashi discovered that a catalyst composed of a type of Lewis acid catalyst called “rare-earth triflate” and a surfactant would enable organic reactions to occur with water as a solvent. Rare-earth triflates are exceptional Lewis acid catalysts that are not neutralized in water. Although rare-earth triflates are less reactive in water, when it is combined with a surfactant, it encapsulates molecules of raw materials just as soap molecules traps dirt. This makes reactions between the catalyst and raw materials take place within the encapsulated microspace, which leads to high reactivity. Furthermore, the Lewis acid catalyst can be recovered and recycled after synthesis because it is insoluble in water.

Twenty-five years after his initial discovery, Professor Kobayashi has explored catalysts that perform effectively in water. Consequently, about 20% of fundamental reactions used for organic synthesis today can take place in aqueous media.

“The figure of 20% may sound low, but it is the result of focusing our efforts on reactions that have the highest value but are difficult to perform. This has clarified catalyst reaction mechanisms, so research in this field is expected to be rapidly accelerated,” says Professor Kobayashi with confidence.

A Pharmaceutical Factory on a Desk 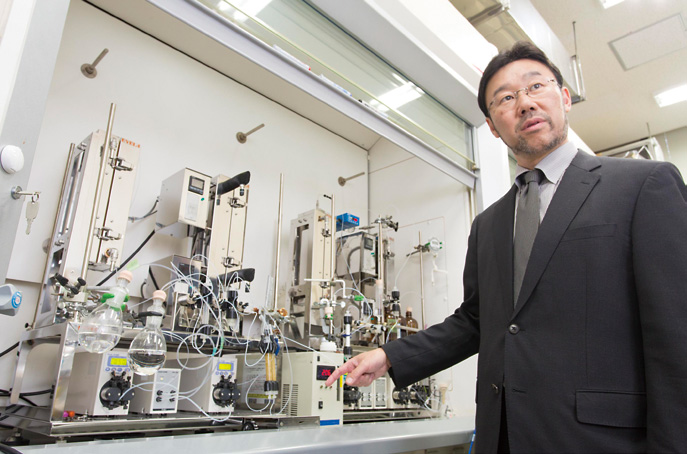 rofessor Kobayashi explaining the flow synthesis system. Practical application of “Pharmaceutical factory on a desk” is now just around the corner.

Professor Kobayashi’s research has entered the next stage: organic synthesis by means of flow synthesis. Flow synthesis is a technique that allows the synthesis of an intended substance to occur by simply pouring raw materials into a flow system consisting of different columns that are responsible for individual reactions.

While this technique has long been used in the bulk production of basic chemicals, such as the production of ammonia, it was thought to be ineffective for complex chemical production, such as pharmaceutical synthesis. This is due to inefficiencies of organic transformations and the contamination of by-products, which may negatively influence subsequent reactions in a multi-step flow synthesis.

Therefore, in the field of fine chemical synthesis for pharmaceutical and cosmetic products, batch systems are often used, in which intermediate materials are purified after each reaction process and then placed into a different tank with different catalysts for further reactions. However, at the end of each process, batch systems produce a substantial amount of waste derived from organic solvents and post-processing. The amount of waste produced is 20 to 100 times greater than the quantity of the drug produced, which is fairly substantial in terms of environmental impact. As an advocator of green chemistry, Professor Kobayashi wanted to develop a means to eliminate this waste.

The objective was to determine how to design a reaction process and the necessary catalysts that can produce an intended substance without producing waste by-products.

The outcomes of Professor Kobayashi’s long-standing research in solid catalysts that are insoluble in solvents have also made a difference in this regard. Solid catalysts are suitable for flow synthesis since a solid catalyst packed in a column will not flow into the next column. Therefore, solid catalysts increase the freedom of reaction process design and the combination of catalysts. Furthermore, as only columns, tubes, and a pump are required for flow synthesis, a flow system is only one tenth the size of a batch synthesis system and produces only one hundredth the amount of waste required for organic synthesis. Professor Kobayashi explains, “You can have a pharmaceutical factory on your desk. And it will be capable of producing an intended substance at the rate of 1 kg per hour.”
In April 2015, Professor Kobayashi successfully produced “rolipram,” a drug component that reduces inflammation. His corresponding study was published in the scientific journal Nature. The study demonstrated that different enantiomers, which are mirror images to each other and can have different medicinal properties, can both be produced by simply replacing one of the columns and can result in highly efficient production with 50% of the raw materials being converted into drug material.
“Production efficiency is now greater than 90%. This is the time to consider practical applications.” he says.

See What No One Has Ever Seen

While expectations of success have recently been raised in the pharmaceutical and other chemical industries, JEOL has long supported Professor Kobayashi’s research.
Transmission Electron Microscope (TEM) is an essential tool for time-based observation of a catalyst’s surface. JEOL provided Professor Kobayashi with a TEM, as well as a highly experienced technician, to support his research.

For studies to reveal catalytic reaction mechanisms, a Nuclear Magnetic Resonance (NMR) spectrometer designed to analyze the molecular structures of substances at the atomic level was used. Although substances can be more effectively measured in solution, the catalysts that Professor Kobayashi works with are solid and insoluble in water. In the earlier stages of his research, he lacked an effective means to analyze his catalysts, but in 1997, JEOL co-developed an analytical method and software that fulfilled his requirements, thus providing support for his synthetic organic chemistry research. Today an evolved version of that software is contributing to the development of high performance catalysts.
Recently, an NMR spectrometer for solid samples, the JNM-ECZ600R, was purchased and will be used to analyze new catalysts that react in solid states without the need for either water or organic solvents. 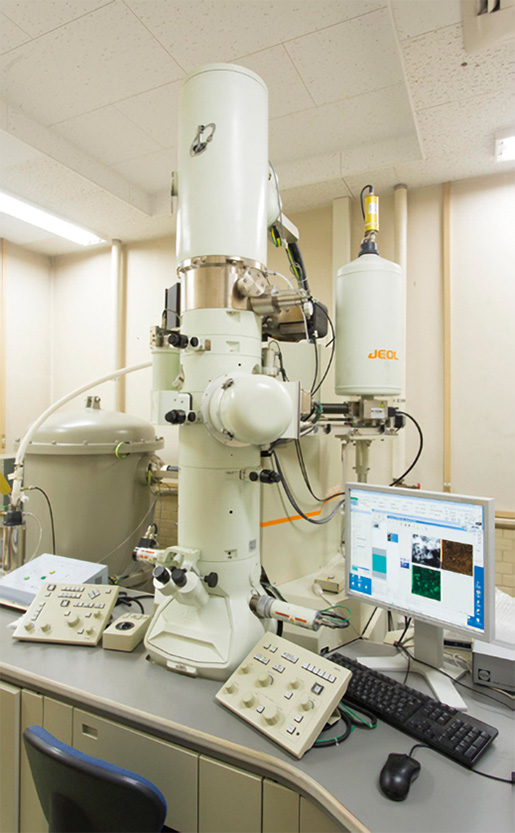 Electron microscopes are essential for assessing a catalyst’s surface structure. 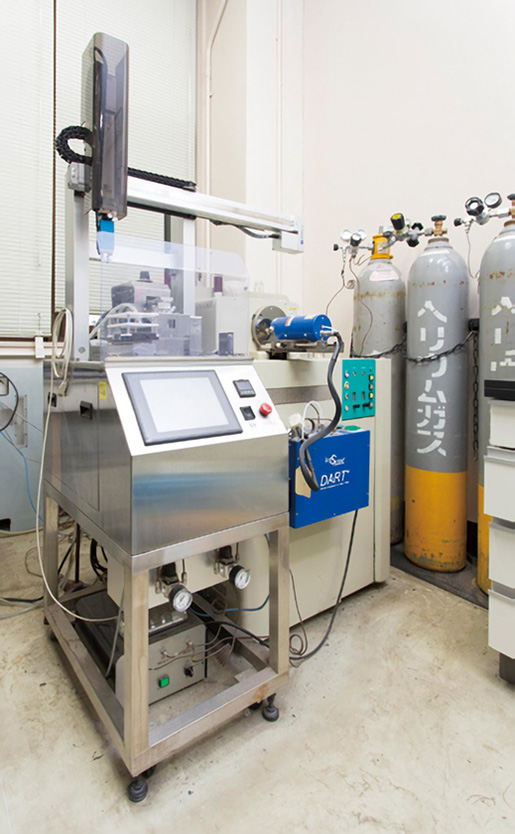 Chemistry to Make A Better Society

In order to raise awareness of flow synthesis, Professor Kobayashi is now developing an industry-government-academia pilot program to build a plant that is open to companies that are interested in this technique for a hands-on demonstration of the advantages of flow systems.
Furthermore, Professor Kobayashi is investigating the development of technologies to safely transport hydrogen gas in preparation for the realization of a “hydrogen society”. While hydrogen gas is highly flammable and explosive, it can be stabilized and transported safely when it is chemically bound with toluene to form methylcyclohexane.Thus, Professor Kobayashi is working toward the development of a catalyst that can efficiently extract hydrogen from methylcyclohexane.
He says, “I think it is important to interact with society rather than constantly studying and staying within academia. Through chemistry, I want to contribute not only to the environment but also to human welfare, health and the energy problem.”