Cryo-electron microscopy unveils the mysteries of life by investigating various molecular structures in the "deep freeze".

Proteins constitute all living organisms and are responsible for a plethora of functions, such as immunity, metabolism, cerebral function and motility. Professor Keiichi Namba, who leads the Protonic NanoMachine Group of the Graduate School of Frontier Biosciences in Osaka University is interested in the remarkable mechanisms underlying these functions and is actively seeking to unveil their secrets by studying the three-dimensional (3D) structures of biological molecules.

The human body is composed of approximately 100,000 types of different proteins. Each of them has a unique role such as forming body tissues, catalyzing metabolism, exchanging nutrients across a cell membrane, or destroying foreign substances. These functions constitute some of the vital activities of our body.

"Proteins are a sort of nanomachines functioning within a living body. I'm immensely interested in what roles such nanomachines play and how they act," says Professor Namba. For over 40 years, prof. Namba has been engaged in research on revealing protein functions from their structures.

Protein is a linear polymer of hundreds or thousands of amino acids. There are only 20 different amino acids that constitute proteins, except for some special amino acids. Thus, different combinations of these amino acids in different sequences form 100,000 different kinds of proteins. The phrase "a linear polymer" may conjure an image of a flexible chain. However, the structure is completely different from a chain in that each protein has a distinct 3D structure. In fact, a long chain of amino acids is folded into complex structures, and these structures are identical among proteins of the same kind; the structure folds at exactly the same point and at exactly the same angle. However, such folds can vary sometimes, and interestingly, the same molecular structures, but with different 3D structures, can exhibit completely different properties and exert distinct functions. For instance, the source of the BSE trouble that caused panic in the food industry in the early 2000s is said to be a protein called prion, neither a virus nor a chemical agent. Surprisingly, prions are indigenous to human and bovine brains. These prions differed from the abnormal ones that caused BSE only in some part of their 3D structure. Thus, to identify the functions of proteins, it is necessary not only to understand their molecular structures by using analytical equipment and method but also to observe their 3D structures in detail.

Prof. Namba is one of the pioneers in research on the 3D structures of biological molecules. He is particularly interested in a group of proteins that are called molecular motors. They are called motors because they exhibit rotary or linear motions similar to man-made motors. For example, human muscle is formed of myofibrilla, which are mainly composed of proteins actin and myosin assembled in filament forms, and linear motions of these protein filaments cause contraction of muscle. Resembling a man-made rotary motor more closely is the bacterial flagellar motor, which rotates a long, tail-like helical filament called the flagellum as a propeller to drive bacterial cell motility in viscous environments. Escherichia coli and Salmonella have several flagella, which are bundled to produce thrust, much like a screw. However, the structures of molecular motors were difficult to visualize for a long time.

Prof. Namba became obsessed with the mystery and started a series of research studies to reveal the 3D structures of these molecular motors. The flagellar motor is composed of about 30 different proteins that form substructures, such as rotor, stator and bushing, and the structure closely resembles that of generic electric motors. Muscle fibers are made of interdigitated bundles of actin and myosin filaments forming an extremely price hexagonal lattice. Industrial motors are said to be one of the greatest human inventions, but the above findings suggest that this notion may be an arrogant presumption.

Coordinated motions of these molecular motors require energy. Although it was known that hydrogen ions flow through the stator channels of the flagellar motor by the electrochemical potential gradient across the cell membrane and that ATP hydrolysis by actomyosin is the energy source for muscle contraction, their high energy efficiency was enigmatic. It was argued that the energy of the thermal Brownian motion may be involved, but the mechanisms as how it is used were unknown. Heat sources provide the energy for atomic and molecular fluctuations, but when an object is considered at the atomic level, atoms and molecules move in arbitrary directions at arbitrary speeds.

It was thought that even molecular motors could not produce thrust in a certain direction via the heat-induced random motions of molecules and atoms. Yet, they actually move in one direction. Therefore, there exists a mechanism that rectifies the random motions.

Recently, Prof. Namba has come much closer to the answer. He discovered that the actomyosin in muscle fibers is structured like a ratchet that allows a preferred motion in one direction, but not in the other. Such a sophisticated system is built of protein molecules with distinctly asymmetric and dynamic 3D structures.

Cryomicroscopy as a Frontier 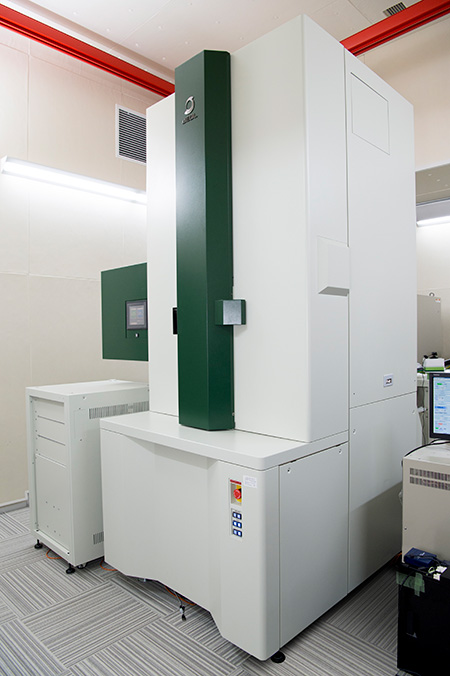 The aforementioned findings were made possible by detailed imaging of the 3D structures of proteins and their complexes. Structural analysis by X-ray crystallography has been the mainstream method for determining protein structures. In this method, crystallized protein sample is irradiated with an X-ray beam, and the intensities of diffracted beams are measured. X-ray protein crystallography has been around since the 1950s, and 90% of the known protein structures were solved by using this method.

However, this method has a major drawback: crystallization is a prerequisite for the analysis but is not easy. In addition, crystallization tends to fix the protein structures in its most stable one. Although molecular motors substantially change their structures while exercising their functions, they can be crystallized only in their stable states. In other words, varying 3D structures cannot be observed.

Cryo-electron microscopy is gaining attention as a way to overcome this drawback. Cryo-electron microscopes are equipped with a sample stage called the "cryo stage," which enables a sample grid temperature to be kept at ultralow temperatures, e.g. between −160°C and −270°C. Protein molecules in a thin film of solution on holey carbon grid is instantaneously frozen using liquid ethane to preserve the "live" state conformation. Recording projection images from many different directions using a cryo-electron microscope allows the 3D structure of these proteins captured at the exact moment of their functioning. Moreover, only a tiny amount of sample solution needs to be frozen, and there is no need to explore a number of crystallization conditions.

"Why do the actions of such tiny substances as proteins lead to visible movement of muscle? This is the question that led me into this research field in my school days. Now I feel like I have been able to answer about half of the questions I had those days," said Prof. Namba.

A Microscope that is the Best in the World

Cryo-electron microscopy has long lagged behind X-ray structure analysis owing to the insufficient resolution of the former. Electron microscopes irradiate samples with an intense electron beam, the electrons are scattered in the sample, and the lenses create an image of the sample according to the scattering of the electrons. However, because biological molecules are easily damaged by the electron beam, the beam intensity needs to be highly attenuated using low-dose techniques to avoid radiation damages. We can only see a hazy, noisy image just like when there is only a tiny bulb in a dark room.

However, long-standing efforts in technological development have now helped us overcome this issue. In terms of hardware, cameras have undergone substantial improvements. Conventional CCD cameras convert scattered electrons into light before creating the image, and various types of noise are generated and amplified in this process. Therefore, the detection performance could not be improved. However, the emergence of CMOS cameras that are capable of directly detecting electrons to record images, has improved both the sensitivity and resolution and even allowed for a correction of specimen movement by high-frame rate imaging. Thus, drastically improved image quality can be obtained using these cameras.

Image processing software too has undergone remarkable advancements. With present-day software, hundreds of thousands of projection images of protein molecules in all different orientations can easily be acquired with a cryo-microscope. These projections are classified into groups where each group contains projections in the exact same orientation. Images of the same class can now be superimposed to improve the signal-to-noise ratio, thus allowing the observation of high-resolution detail. In the last step, many class averages are merged into a 3D structure. Such complex data processing is made possible at the laboratory level owing to the advanced processing capacity of modern-day computers.

The CRYO ARM™ introduced in Prof. Namba's laboratory is designed to meet his requirements for "the world’s best microscope." The design target was to enable structure analysis at resolutions better than 2.0 Å (1 Å or angstrom is equivalent to 0.1 nm), which is better than standard X-ray crystallography. Further, multiple sample grids can be loaded into the CRYOARM™ and automatically exchanged into the specimen stage at any time for the users’ convenience. A substantial reduction in the time required for image data collection and analysis is one of the greatest advantages of this microscope. 3D structure analysis that used to take one year some 5 or 6 years ago can be now completed in a week.

Breakthrough Just around the Corner

Prof. Namba believes that the 3D structure of not only proteins but also any of the other biomolecular complexes, including lipids and nucleic acids, will be visualized in 5 years.

An especially important application is the analysis of membrane proteins on cell surfaces. These proteins are the target of actions of pharmaceutical reagents, and their 3D structural analysis will help reveal the mechanisms underlying their molecular function, dramatically improve therapy outcomes, and make possible the development of drugs with no side effects.

In the future, there may even be a movement toward the industrial applications of biological molecular motors, such as super energy-saving machines that require a minimal power source and operate using ambient heat as the primary energy source. This paradoxical notion could defy the long-held belief about machinery and engineering.

Although we are still a long way from realizing such inventions, their realization may prove to lie just around the corner. 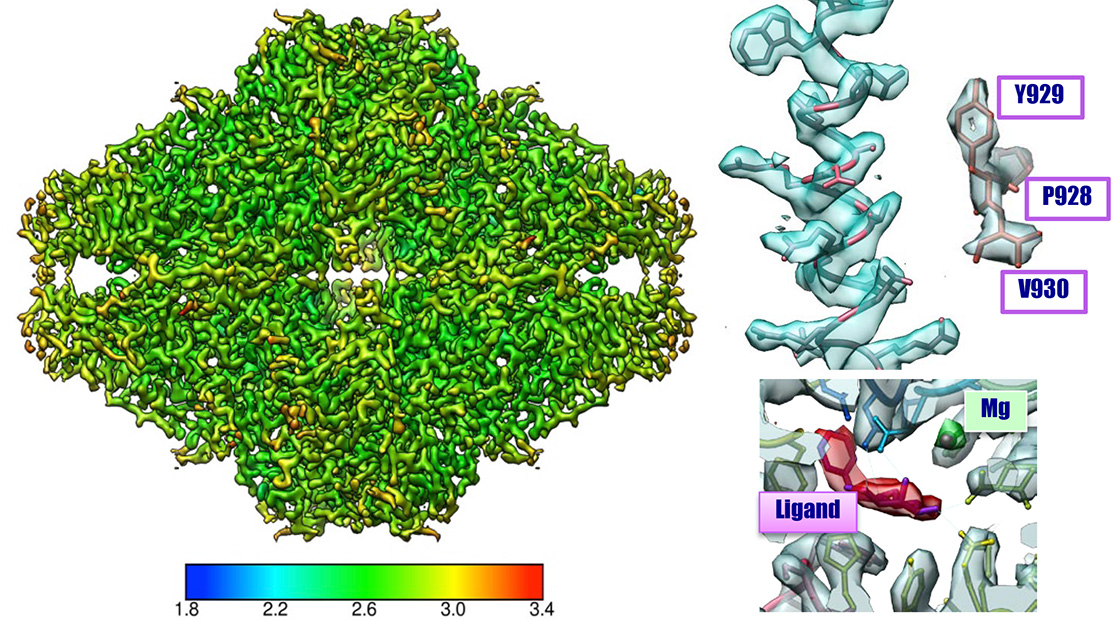 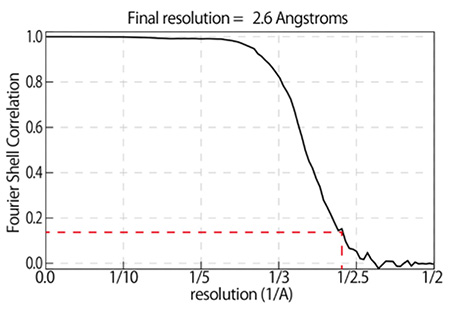