Additive manufacturing technology that uses AM Machine to produce metal parts. It is expected to revolutionize parts for aircraft and rockets, which require strength and reliability. We asked Professor Akihiko Chiba of the Institute for Materials Research at Tohoku University, who is leading the way in metal additive manufacturing technology in Japan, about the potential of this technology.

A Birth of New Metal Processing

The human race may have another breakthrough with this. It is not AI (artificial intelligence) but the additive manufacturing technology for metal.

Additive manufacturing means a so-called 3D printer (or AM Machine). It was born in late 1980s, for the use of plastics. But in the 2000s, equipment that enabled additive manufacturing using metals also appeared.
"When I looked at the product with an electron microscope, I could see that a clear single crystal had been formed. It could be called a new metal processing. I was strongly interested in this."

The professor is a pioneer for metal materials development and has been engaged in research to increase the strength of metals by "miniaturization" of their structure and removing elemental inhomogeneities. He also continues searching for metal materials that are suitable for artificial joints or implants.

"We mix metal elements with each other, melt them, solidify them, heat them, and forge them. That is what it means to develop a new material", so he defines his research.

While it is strong enough not to be easily deformed at room temperature, it can be melted and poured into molds, and can be processed into various shapes by cutting and bending. Moreover, it does not decay like wood. Metal is an ideal industrial raw material. Since the beginning of history, people have made many inventions by processing metals. Starting with weapons and sacred objects, metals have been used extensively in construction materials, automobile parts, computers, and aircraft parts. The development of materials to increase strength and the advancement of processing technology to increase the efficiency and precision of processing became the foundation for new inventions, which in turn created new needs and prompted the next invention.

Currently, what the market expects most is "hardness". It is expected for metal materials to have strength that endures heavy and hard usage and to provide the products with absolute reliability. Fuel injection nozzles and turbine blades of jet engines are the best examples of this.

"The market demand for hard materials is very large. And we can achieve the hardness to meet it. However, we cannot be happy just because we have produced a hard round bar or ingot. It is only when we can process them into parts that we can put them to practical use. Sometimes, however, the material is too hard to be machined. In material development, it is necessary to consider not only the composition but also the subsequent processing process." Titanium, for example, is stronger than steel, and has about half of the mass of steel, making it one of the ideal materials in the aerospace field. However, it is prone to react with various elements at high temperatures, so forging and welding require special processes. Melted titanium is poured into a mold in an environment that is shielded from oxygen and nitrogen, or if that is not possible, it is poured into a mold as a part that is more than twice as thick, and then shaved to the required thickness. Naturally, the manufacturing cost rises.

"I have had a lot of troubles with titanium", said the professor. He was hoping that a 3D printer (AM Machine) could reduce the labor involved in the molding process.

From Expectation to Confidence
"Electron Beam makes it possible"

However, the 3D printer (AM Machine) he saw in the early 2000s for the first time was a complete disappointment.

"It was a method of shaping metal powders by irradiating them with a laser. However, when I looked at the finished parts, I found that the strength was too low, and although it was fine for prototyping, I felt that it would be a long time before I could use it for products."

At the time, the head used was a carbon dioxide laser. Because of its longer wavelength, it reflected off of the surface of metals such as aluminum, copper, and titanium, resulting in insufficient melting. Reactions with oxygen and other substances during high-temperature processing were also assumed to lead to deterioration.

Several years later, he was introduced to an additive manufacturing method using an electron beam by a company who was at the same academic conference. The professor sharply reacted with the word "electron beam".

"Electron beam was a technology used in welding and electron microscopes. It required a vacuum environment. In a vacuum environment, processing was possible without the impact of oxygen and nitrogen, thus the materials to be used might not matter, if it was titanium or else, I thought".

This is where he saw the electron beam additive manufacturing that he mentioned earlier. The artificial joint he saw at the factory in Gothenburg, Sweden, was strong enough and also had micron-level porosity to promote fusion with the living bone.

"The ideal composition, strength, and surface finish of an artificial joint can be achieved without the use of molds. Above all, it was revolutionary to be able to tailor the process to each patient's body." 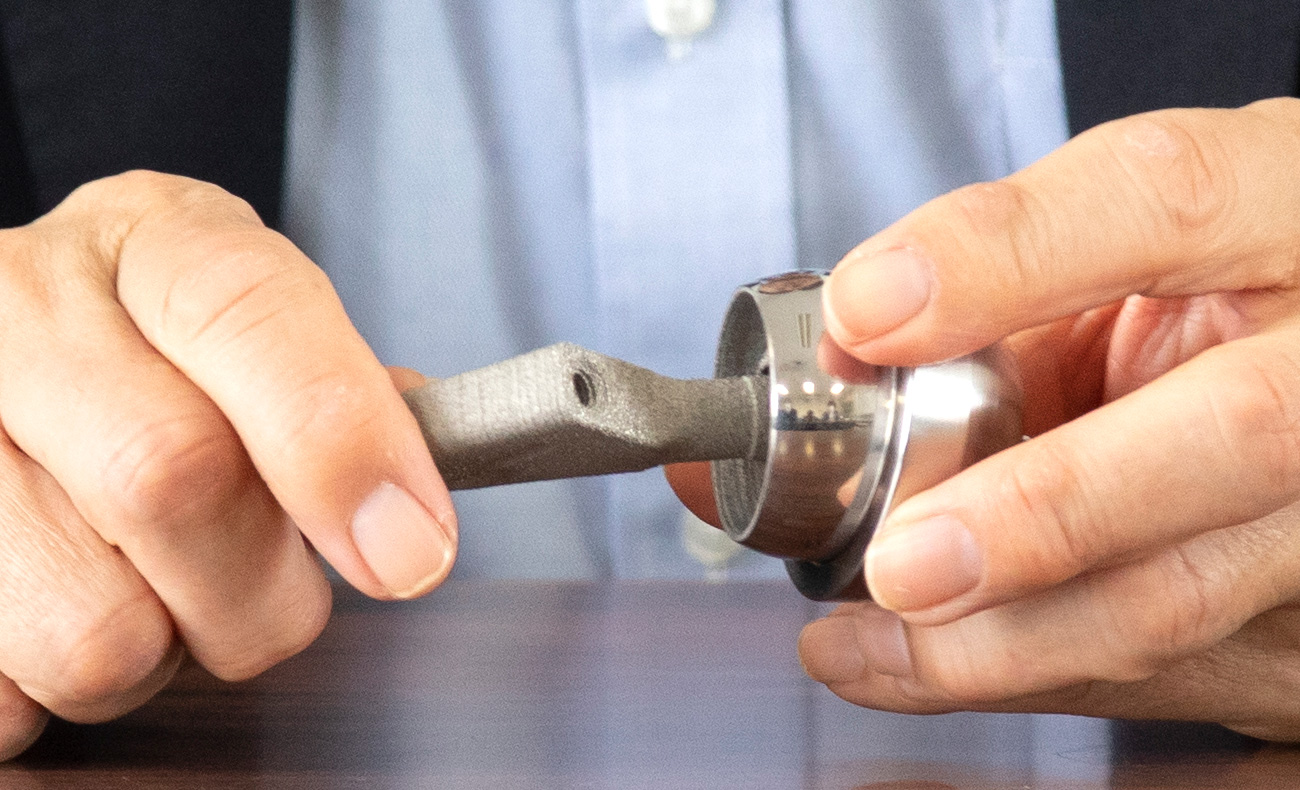 Enamored with the possibilities, the professor purchased the equipment and conducted exhaustive research on the material characteristics of the "completely new metal processing".

As a result, it became apparent that, far from being inferior to conventional processing methods, it had an advantage that no other processing method had ever been able to achieve. That was "homogeneity of material distribution".

Normally, when making an alloy, the metals are melted together and then cooled to form an ingot. During this cooling process, the heavier elements sink to the bottom and the lighter elements gather on top. In this way, inhomogeneity of material (=segregation) occurs in the ingot. If the material is inhomogeneous, the properties such as strength will also be inhomogeneous. This may not be a problem for small ingots, but for large ingots with sides of several meters, it takes time to solidify and segregation is not negligible. However, this inhomogeneity cannot occur in additive manufacturing where the powders are melted and formed on the spot.

Also, when pouring into a mold in casting, the part close to the mold is cooled rapidly, while the part farther away hardens slowly. When this happens, a cavity may form in the center.
"This is normally a fatal flaw, but since it cannot be avoided, we have a history of somehow coming to terms with it. However, this is unacceptable for safety-critical parts such as jet engine turbines. With additive manufacturing, this can be avoided."

Strength tests have shown that parts manufactured by additive manufacturing are stronger than forged parts, which are cast in a mold and then beaten or heated further to increase strength. The challenge is the time and cost required for manufacturing, but "science and technology have always evolved for the better. I have high hopes that this problem will be solved one day", he hoped.

As the professor continues his research into additive manufacturing, another area he has been focusing on is the development of a domestic electron beam metal 3D printer (AM Machine). JEOL, a manufacturer of electron microscopes, was chosen as a partner.

"Electron microscopes control electron beams on a nanometer scale. By using this technology, it is possible to develop the world's best 3D printer (AM Machine). I asked them if we could work together to develop one."

Thus, JEOL participated in the Ministry of Economy, Trade and Industry's 3D printer development project TRAFAM*, which started in 2014. One of their projects, which lasted until 2018, aimed to increase the accuracy of the product manufacturing by about five times, the speed by 10 times, and the size of the buildable area by about three times. The goals have been almost achieved. At present, the prototype is currently being tested by Prof. Chiba, and is expected to be commercialized soon. (at the time of the interview in March 2021).

"In metal processing, casting, which involves making a mold and pouring and forging, which involves beating and heating, are legacies that have been around for thousands of years. Human races have shown great talent in improving these techniques. But they consume large amounts of energy, cost millions of yen to make even a small mold, and require manufacturing that accounts for the fact that the mold becomes smaller as it cools and that the material distribution is inhomogeneous. They were truly a collection of analog technologies. However, with additive manufacturing, it is now possible to even control the microstructure of the metal alloy during the manufacturing process. If the material development process and the manufacturing and processing process can be visualized in a unified manner, we can say that we are entering a new era of material development. I would like to see this technology implemented in society as soon as possible." He was enthusiastic.

A departure from thousands of years of legacy is almost there. 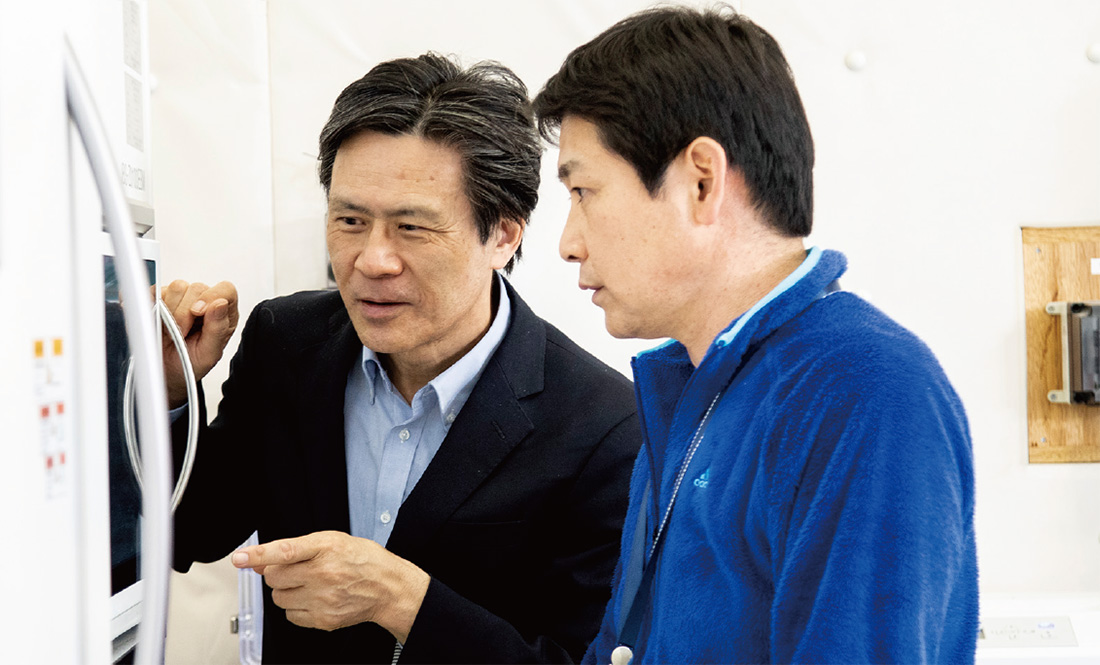