I want to make a polymer visible

I want to make a polymer visible.

Dr. Sato has been closely accompanying the evolution of mass spectrometers for 30 years. By fully utilizing the state-of-the-art mass spectrometers, he has been clarifying what is happening in the world of polymers. The evaluation methods with his knowledge are about to give new strength to the chemical industry.

Polymers are interesting because you never know what you will find

"The analysis of polymers is interesting because it reveals many different things. It's like a type of fishing, where you never know what you're going to catch” laughs Dr. Hiroaki Sato, of the National Institute of Advanced Industrial Science and Technology (AIST). He specializes in analytical chemistry.

Throughout his student and post-doctoral years, he has been involved in mass spectrometry, moving between science, engineering, and agriculture fields. He has analyzed a wide range of materials, including flame-retardant industrial materials, pesticide auxiliaries, biodegradable agricultural materials, proteins, and microorganisms.

"I want to make a polymer visible. That's what I've always wanted to do. I always do the same even when the target of analysis changes. I was always trying to come up with ideas on what this was and how we could investigate it.”

In particular, he has been focusing on the decomposition process. He has been involved in a series of studies on the thermal degradation of plastics, biodegradation of pesticide auxiliaries, and environmental dynamics of organic substances. For 30 years he has been working with the highest performance mass spectrometers of the time, and pushing them to the limits. The mass spectrometer is a tool that he is familiar with.

He says, "I think I was able to get a sense of what it means for mass to change because I have worked in many different fields. You can't see the molecule itself, but you can understand the reaction that took place by looking at the change in its mass. The mass spectrometer is a magic tool that can tell us that."

Mass Spectrometer to Change the World

In 2010, he received a prototype of a mass spectrometer. It was made by JEOL. It succeeded in extending the flight distance of ions that had been desorbed from the sample by sending them on a spiral trajectory, which was much longer than that of conventional instruments. The flight distance of ions per unit time depends on the mass of the ions. Therefore, by detecting the difference in the flight distance (flight time), we can tell at a glance what molecules are contained and in what state. Nevertheless, ions with very small differences in mass can appear together as a single peak in a mass spectrum. This has been a longstanding problem in mass spectrometry.

To solve this problem, manufacturers have been working on increasing the time of flight. To use an analogy with a track in athletics, even if the difference is so slight as to be undetectable at 50 meters, if you run 100 meters or 200 meters at the same speed, the difference becomes apparent. The method of "gaining distance" by making ions run back and forth or in circles on the same course was said to be revolutionary when it was first introduced, as it could extend the flight distance virtually without limit. But it could not be a fundamental solution because of the problem of overtaking, in which ions that lag behind in their circles are detected first.

The method developed by JEOL to fly ions in a spiral trajectory solved the overtaking problem, although the flight distance is finite. It was expected to achieve an order of a magnitude higher resolution and accuracy. "For example, even if there is a difference between CO and C2H4 in the structures of two kinds of molecules, the mass difference is only 0.036 Da. With conventional mass spectrometers, the peaks in the mass spectrum would have been the same. However, with the SpiralTOF™ (JEOL's prototype), the peaks are beautifully separated. As soon as I used it, I knew a new world had opened up. Until then, I had thought that polymer analysis did not require such high resolution, but that was only if you were measuring pure polymers. Industrial polymers are often complex mixtures, and polymer products in the market are made by mixing multiple polymers. So, I thought it should be useful in practical scenes such as product evaluation.” 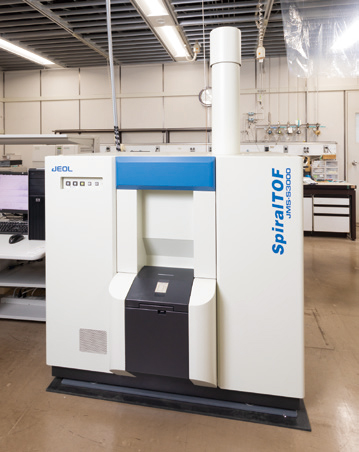 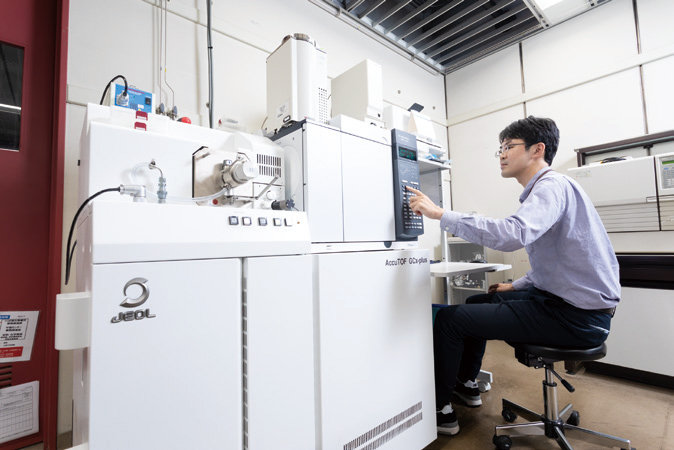 "Guaranteeing" the quality of polymers at the molecular level

Around that time, Dr. Sato was transferred to Research Institute for Sustainable Chemistry, and was appointed as the head of the research group. As his new initiative, he established a solution to diagnose and evaluate materials from various perspectives.

"Looking around the chemical industry, there is a great deal of effort being put into the development of new materials, and excellent products are appearing one after another. On the other hand, there is not much research on the evaluation of the resulting materials and products. In the Functional Chemistry Research Division, we already had a group of people with diverse skills in physical properties and spectroscopic analysis. I proposed that, if we could add my knowledge of looking at and evaluating polymers at the molecular level, we would be able to offer a comprehensive package for polymer diagnosis and evaluation.”

This means that even if the product passes the inspection for a moment, the yield rate may be extremely low in the parts manufacturing process. Or when the product is released into the market, it may deteriorate significantly after being used for a while.

"A high-resolution mass spectrometer can detect even the slightest differences in repeating structures and end groups in the same polymer. In other words, the origin can be determined at a glance. If we can have a system for evaluating molecular structures as a common language, material manufacturers will be able to send out products with confidence, and product manufacturers will be able to use them with peace of mind. It will improve the accuracy of production management and quality control throughout the entire supply chain," he emphasizes.

He has also developed a new method to facilitate the analysis. He used the Kendrick Mass Defect (KMD) method, which has been used for evaluating petroleum processing, in the characterization of polymers. Simply put, the KMD method is a two-dimensional plotting of the target material mass, with the integer part of the molecular mass on the horizontal axis and the fractional part on the vertical axis. In this method, data points of polymers with the same repeating unit are plotted in a single line, while polymers with a different structure make a different line. Additives do not have a repeating cycle, so they float up on the graph. Substances that could not be clearly distinguished in mass spectra due to overlapping distributions can be clearly distinguished using the KMD method.

"The increasing sophistication of mass spectrometers has added an eye of chemistry to quality control. We can increase our competitiveness by devising analytical designs for how to combine this with other analytical methods. This idea came up when there was an original and high-performance mass spectrometer, and when I used it to the limit. I would love to see it spread." 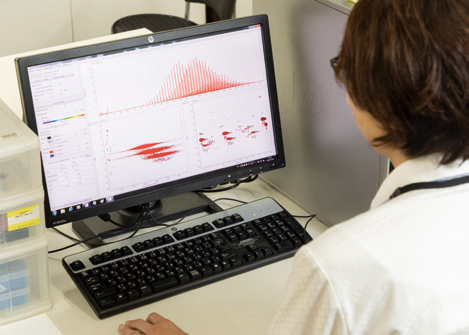 In response to global warming, it is expected to become more difficult to make new plastics from petroleum. This means that we will have to rely more on recycled materials, and the risk of undesired mixture will be even higher. The polymer evaluation method established by Dr. Sato’s group may be an essential solution for the decarbonization era. 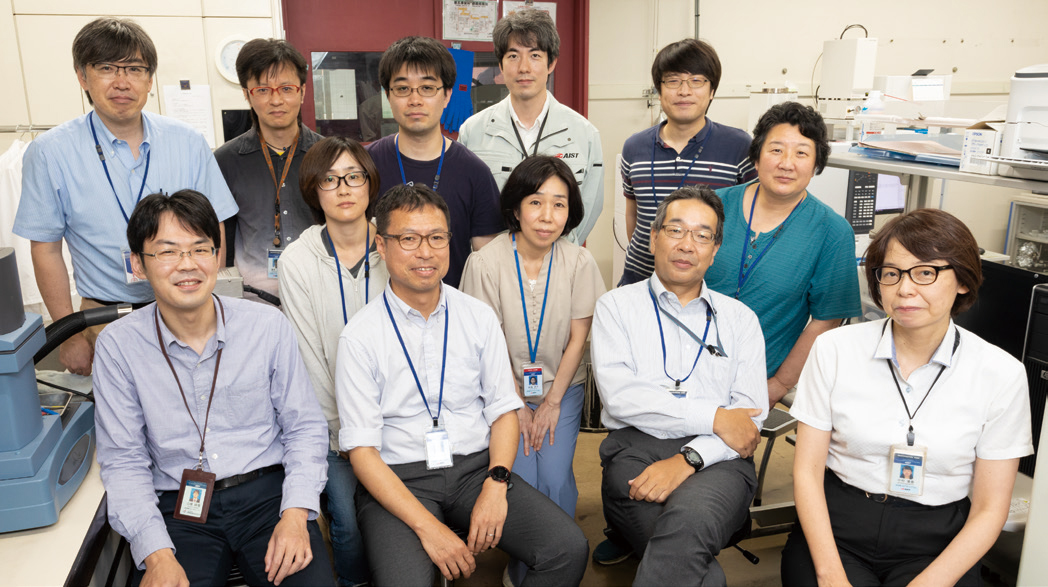