In 1938, I. I. Rabi of Columbia University successfully made accurate measurements of nuclear magnetic moments using magnetic resonance absorption of molecular beams (and was awarded the Nobel Prize in Physics in 1944 for his work). In 1946, F. Block and E. M. Purcell successfully demonstrated nuclear magnetic resonance (NMR) for condensed matter (and shared the Nobel Prize in Physics in 1952), marking the start of NMR.

In 1950, it was discovered that there were slight changes in the atomic nucleus Larmor frequencies due to the chemical bonding state of the atoms (chemical shift and spin coupling). This led to the idea of using nuclear magnetic resonance as a means to analyze and identify materials, marking the beginning of NMR spectroscopy.

In 1956 the first JNM-1 NMR instrument was released by JEOL (at that time, Japan Electron Optics Laboratory Co. Ltd.). 1H resonance freuqency of the CW NMR system was abe to choose among 4, 12 and 32 MHz. A spectrum was displayed on an oscilloscope, and a strip chart recorder (recording onto paper tape) was used to print the results. Three separated 1H signals of ethyl alcohol were observed at 32 MHz (7,680 gauss). 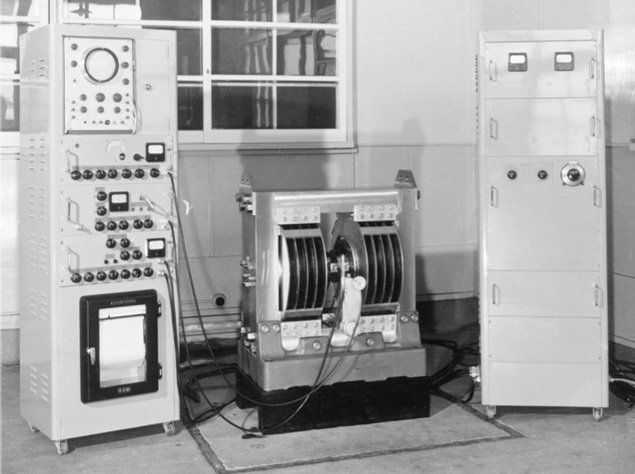