Making a New FE-SEM with Unprecedented Performance and Usability!

The development of a new FE-SEM with unprecedented performance and usability named JSM-7900F, which reflects the prospective future of JEOL, began with one particular control theory. 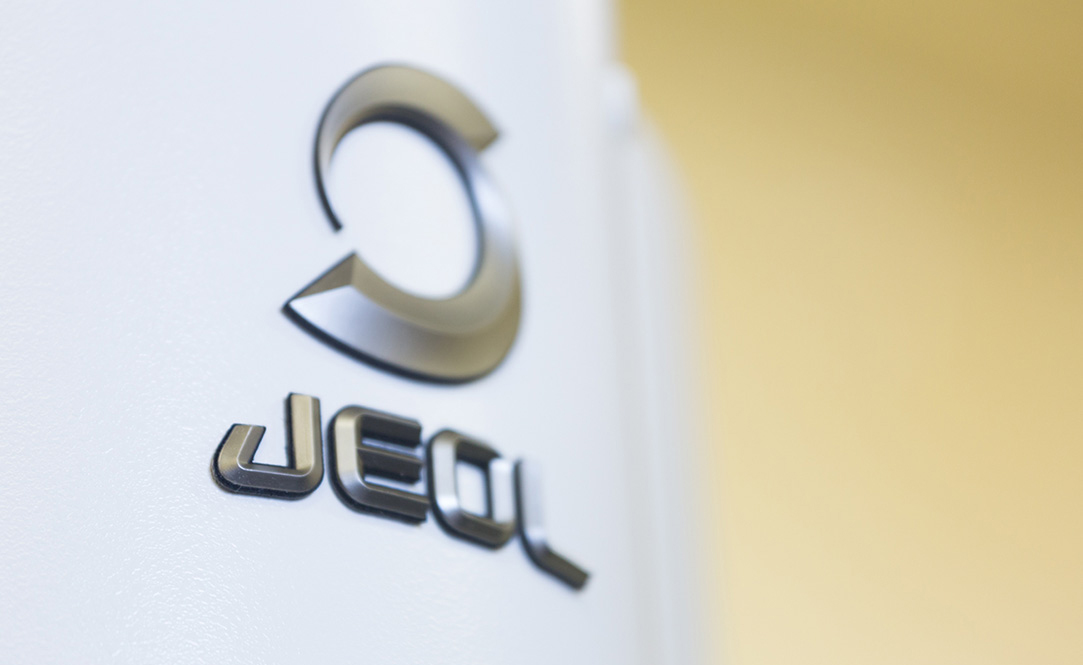 In 2011, Takehiko Shinzawa (Group Manager, R&D Dept., SM Business Unit) was euphoric with a 30 page-long paper, introducing a control theory in his hand.
Any outsiders could not even understand the meanings of figures and formulas written in that paper. The specialist in scanning electron microscopes (SEM), however, vividly comprehended the innovation represented in it.

SEM is one type of electron microscopes, capable of imaging specimens at the magnifications of x10 to x1,000,000. SEM focuses an electron beam onto one spot on the specimen surface via an electron lens, which works like a magnifying lens focusing the sunlight at one spot. The focused electron beam acts as a probe tracing the surface and exciting secondary electrons as signals, indicating topographic micro-structures on the specimen surface. FE-SEM equipped with a field-emission (FE) electron gun, which corresponds to the light source for optical microscopes, can produce a narrower beam than general SEMs and allow for imaging at high magnifications.

JEOL has been active in the FE-SEM market since 1977. High resolution is very effective in surface imaging of specimens at micro-scale and widely involved in various applications, including basic research in materials, biology, foods, and semiconductor quality control.
Thus, FE-SEMs need to be developed in such a way that their scope of application is widened. For example, they are anticipated either to constantly deliver high probe current for some applications or to generate a minimal electron beam diameter with small probe current for others. In other words, the SEM must be able to serve as a marathon runner or a sprinter depending on usage requirements.
To have the optimal electron beam diameter under various electron beam irradiation conditions for different purposes, SEM instrument components must be optimized, which requires full knowledge about the instrument mechanism.
Although JEOL provides training on product operations upon delivery as well as periodic workshops, users often claim that they face difficulties in using the instruments to their fullest capacity.
Thus, it has been a global common notion that FE-SEM provides high resolution but is not easy-to-use, regardless of manufacturers.

"We have been global leaders in resolution of FE-SEMs. However, superior resolution has never been the ultimate goal of JEOL's product development. As the next step, we seek to provide users with the comfort in obtaining information expected by them. This was not only what I thought but what every colleague in the company wanted," said Shinzawa.

"Any control method available at that time was not sufficiently sophisticated to make a highly sophisticated SEM. To bring the ideal SEM into reality, we had to re-define the instrument features from a blank sheet of paper and undertake the fundamental review of both hardware and software configurations."
Therefore, Shinzawa asked his trusted subordinate, Uno, an expert in theoretical calculation, to create "the completely new" from the existing control methods. The new control theory was what Uno compiled in response to the request in a period as short as 4 months. 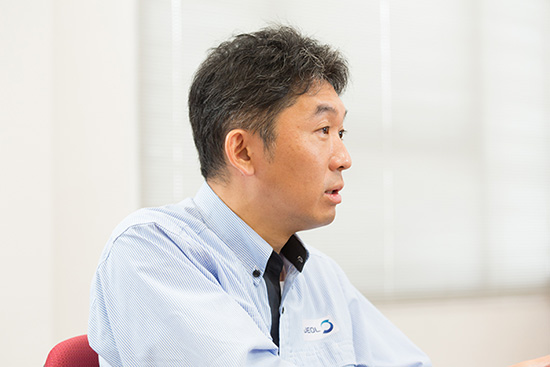 "Hardware development aiming to realize an incredibly user-friendly SEM had commenced before implementing the control theory. The new hardware was designed to control different components for each model using the same operation system, which would deliver identical senses of operations with different instrument models with different components.
Simultaneously, another team engaged in the development of automatic adjustment functions for SEMs, reported an innovative accomplishment. JEOL's design and development teams were driven by the strong momentum toward the goal of achieving an unprecedentedly user-friendly microscope," said Shinzawa.

"It made me believe that we could create a highly sophisticated SEM by combining the hardware with the incorporated automatic adjustment functions and Uno's control theory."

Shinzawa was not the only one who was excited at this great possibility. Five team members who had been working with Shinzawa also acknowledged the possibility and seriously desired to initiate the development.
However, Shinzawa had a concern. He assumed the risk in development to start from a completely clean state , i.e., it would lead to considerable wastage of time in explaining the control theory and its effectiveness in addition to gain support and approval for the development. Delayed commencement of the development may not satisfy the need for speed today. However, he assumed that he could gain support much quicker by implementing and demonstrating the control theory first; therefore, he decided to initiate the development on his own responsibility.

Team members did their best in their respective fields. However, none of them may have fully comprehended the image of the final instrument to be developed, which was based on the integrating outcomes of their efforts in each field.
He looked back, "Each development engineer had an image of the new FE-SEM. However, they worked on a specific part of the entire instrument and could hardly comprehend the entire or the big picture. I believe that professional engineers should naturally concentrate on exercising their best performance in their respective fields. However, the FE-SEM had to be completed by integrating the outcomes of their work. Any situation wherein the outcomes did not match together must to be avoided. Therefore, it is important to have the clear development concept shared with every member." 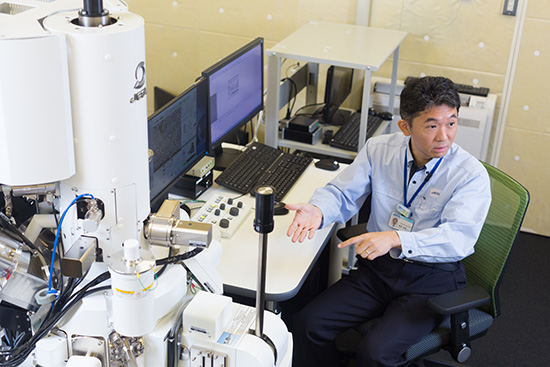 The ultimate goal was to provide recognizable images to users under any electron beam irradiation conditions. It is not easy to provide clear images from a black-out screen, from the existence of astigmatism, or from a specimen that is largely out of focus. However, again, it is imperative to provide recognizable images to users under varied electron beam irradiation conditions for diverse applications.
Although each engineer may initially feel that their contributions would only make the instrument "a bit more convenient than the previous one," the integrated outcome of their contributions even surprised Shinzawa, who had been at the core of the development project.

An image of a specimen can be acquired by a single push of a button without the need to operate other knobs….

They were on the verge of a great paradigm shift.