When a narrowly-focused electron beam is irradiated onto a material surface, electrons will be ejected from the very top surface of the specimen; the ejected electrons are called Auger electrons. This is an electron which has energy unique to the source element, and by measuring the energy of the Auger electrons, it is possible to determine which elements exist, in what kind of chemical situation, in a very small area of the top surface of a solid. By examining the intensity of the emissions, it is possible to determine, how much of each element is present. Micro means “very small”, and the meaning of probe is “a slender tool for examination or exploration”.

Auger Electron Ejection from an Atom

Let’s explain what the Auger electron is, which holds the key for structural analysis of a material surface.

As shown in Fig. 1, an atom has electrons around the nucleus. A fixed number of electrons fill in the places in each level, which are named the K level, L level and so on. In addition, the energy of the electrons is higher in the levels that are further away from the nucleus, increasing in order of the K, L, and M levels.

Also, the energy of an electron in each level, K, L, M, and so on, is a specific value for each element.

Now, when a high speed-electron flies from the outside into an atom, it may collide with an electron in the K level and knock it outside of the atom (fig. 1(a)). This means the K level is now missing one electron, so one of the electrons from the L level will move to fill the gap. This is because an atom always acts to achieve a stable state having the lowest energy. If an electron in the L level, which has high energy, drops into the K level, which has a lower energy, then there is extra energy left over. This extra energy can be emitted from an atom in two ways, as follows.

The electrons emitted from the specimen surface are analyzed by an instrument that differentiates energies, called an HSA (hemispherical sector analyzer). After the voltage to apply to the HSA is determined, only the electrons which have the energy corresponding to the voltage will be able to pass through the HSA and be detected.

When electron beams hit a material, electrons called secondary electrons are also emitted. By detecting these electrons, we can observe the form of a specimen, in the same way as the ordinary scanning electron microscope.

In addition to this, backscattered electrons and characteristic X-ray, which also provide important information about the specimen, will be emitted.

For this reasons, all types of detectors are being incorporated.

By scanning electron beams across the specimen surface and measuring the Auger electrons at each point on the specimen, then displaying them by correlating the quantity with colors, an Auger image like Fig. 4 can be obtained.

The examples of Fig. 3 and Fig. 4 are the data of a specimen of lead-free solder (tin-silver-copper-bismuth series).

Determining the elemental distribution in a depth profile

The Fig. 5 is the data of a solder ball specimen. As mentioned earlier, this data shows the elemental distribution in the depth direction. The horizontal axis corresponds to the depth direction, and the vertical axis represents the intensity of the Auger electrons of each element.

From this result, we see that oxygen and tin were detected on the specimen surface, so we know that the surface was covered with tin oxide. The thickness of the tin oxide layer influences the adhesive properties of the solder ball as well as characteristics such as electrical conductivity. Therefore, there are studies made to determine how the differences in manufacturing conditions and storage environments influence the thickness of the oxidized layer. 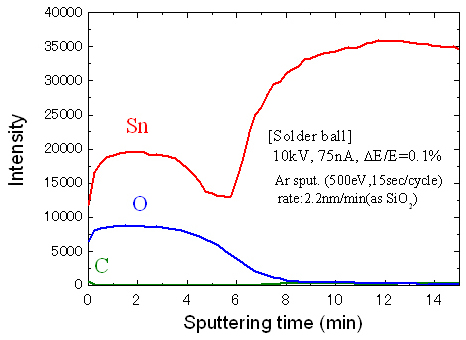 The solder ball characteristics mentioned above can be influenced by whether the oxidized layer is SnO2 or SnO, so it is important to measure the chemical state of the tin. JAMP-9500F equipped with an HSA can analyze the chemical state of various elements. Fig. 6 shows the standard spectra of SnO2, SnO and metal Sn. 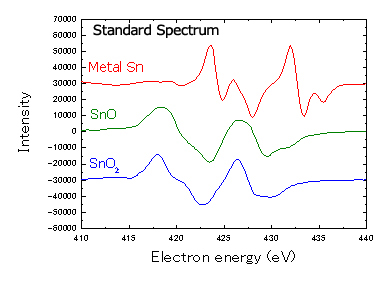 By using standard spectra to mathematically separating the spectra obtained in Fig. 5, a depth profile distribution by chemical state can be obtained. The result of this chemical state analysis is shown in Fig. 7.

This result shows that the surface consists of SnO2 (tetravalent) and that divalent tin SnO exists in the interface with metallic tin. 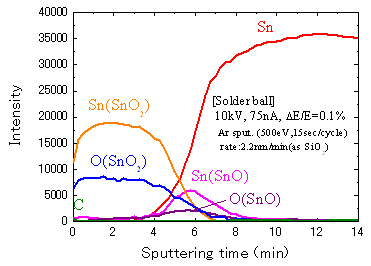 Since the Auger microprobe has a high performance electron optical system, and can collimate electron beams to very small, precise sizes, it is capable of analysis of very small areas, including structures on the order of 10nm (one-100,000th mm).

Because the composing elements and their chemical states in the uppermost surfaces and micro regions of a material often determine the physical properties of semiconductors, ceramics, and metals, the Auger microprobe fills an important role in surface analysis and very small area analysis, and is expected to increase an importance in the future.