A CP can prepare cross sections of various materials such as metals, ceramics, plastics, etc., and has been utilized in various fields.

The major components of the Cross section polisher (CP) are the Ar ion source, shielding plate and specimen, as shown in Fig. 1-1.

The Ar ion source ionizes Ar gas, generates Ar+ ions and, with a voltage applied, emits Ar+ ions that are accelerated to certain energy intensity. The emitted Ar+ ions (ions can be accelerated up to a maximum of 8kV) penetrate the specimen, give energy to the atoms composing the specimen, and consequently shift the position of these atoms. This phenomenon is called knock-on, and a repeatedly occurring knock-on is called a cascade collision. The phenomenon of the atoms composing the specimen being dislodged in this series of processes is called sputtering. A specimen is milled as a result of this sputtering phenomenon.

Please use the latest browser.

Using a broad ion beam, the cross section polisher (CP) can produce a surface with little roughness over a wide area (larger than 500μm).

Below are images of electronic parts taken by EPMA. From the backscattered electron image (Fig. 2-1) and elemental mapping image (Fig. 2-2), it is evident that a good quality surface with little roughness is obtained in an area as wide as 1mm2 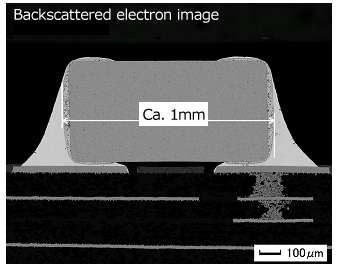 Fig. 2-1 (Electronic parts by: mobile phone sample) cross-sectional view of an electronic component according to CP

The effectiveness of processing with a Cross Section Polisher (CP) can be enhanced by using a specimen rotation holder. Fig. 3-1 shows the principle of this method. In the normal process method (the method using the shielding plate), there are cases where streaked roughness becomes outstanding when cutting porous specimens or complex materials made of several substances which have different etching rates. By using the specimen rotation holder, which allows the irradiation of the Ar+ ion beam to the specimen over a 360° degree range, a cross section free of striation can be obtained even for such specimens. 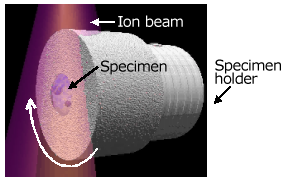 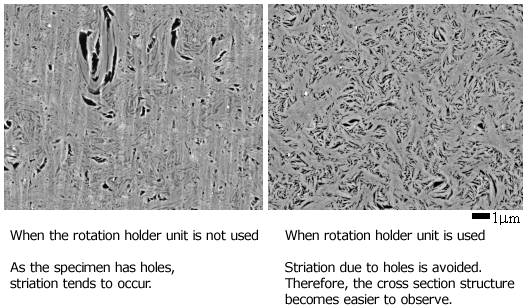