The Scanning Electron Microscope, which is utilized in various fields such as medical, biological, metals, semiconductors and ceramics, is broadening its application frontier. With abundant attachments and devices being combined, its capability is expanding. SEM is regarded as one of the most powerful tools being used at R&D institutes and quality control inspection sites all over the world.

The Scanning Electron Microscope (hereinafter “SEM”) enables a clear observation of very small surface structures, which is not possible with an optical microscope (hereinafter “OM”). Moreover, as it can provide images with deeper focal depth, it enables observations of 3-dimensional images, with a similar sense as when we look at a substance with the naked-eye, by enlarging the specimen surface which has a rough structure.

SEM utilizes electrons to show an enlarged image of a specimen, in the same way as the transmission electron microscope (hereinafter “TEM”). Since an electron has a shorter wavelength than light, it enables us to observe smaller things than can be seen with the OM. The word resolution refers to the smallest size that can clearly be observed (the shortest distance between two neighboring points…the resolution of the human eye is said to be 0.2mm). The TEM’s resolution is 0.1 to 0.3nm while the SEM’s resolution is 0.5 to 4nm. The reason the SEM’s resolution is lower than the TEM’s is attributed to the fact that the wavelength of the electrons becomes longer because the accelerating voltage of the electrons used in the SEM is as low as several kV to several tens kV, and to the characteristic difference of the electromagnetic lenses used to converge the electron beams.

TEM provides an enlarged image projected onto a fluorescent screen, where the image is formed by the electrons transmitted (passed) through the thinly prepared specimen. In comparison, SEM forms the image using the electrons which were reflected or generated from the surface of the specimen. 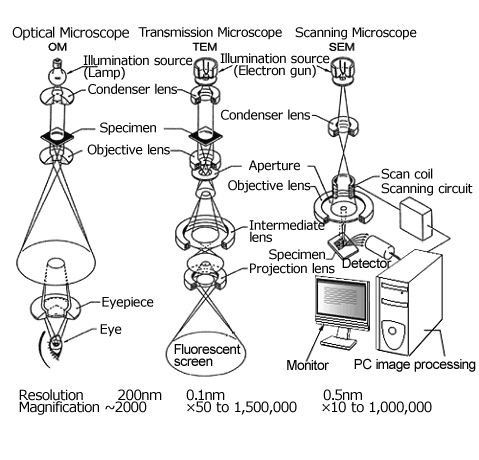 Why can a specimen be observed with an electron?

From the spot illuminated by the electron beam, various signals, such as secondary electrons, backscattered electrons, characteristic X-rays, and cathodoluminescence, are emitted depending on the form of the specimen, the density of the substance, and the elements contained inside.

The Scanning Electron Microscope (SEM) normally detects secondary electrons to form an image for observation. As the intensity of the generated secondary electrons varies depending on the angle of the incident electrons onto the specimen surface, subtle variations in the roughness of the surface can be expressed according to the signal intensity. 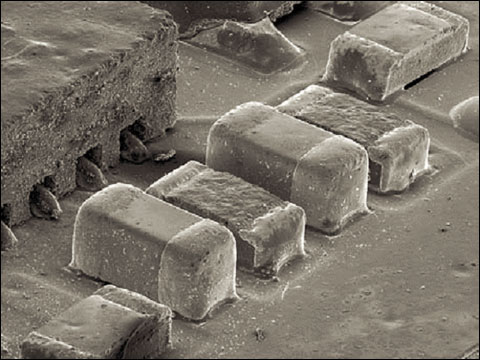 There are many types of scanning electron microscopes, ranging from the ordinary type which uses a tungsten filament as an electron source, to the more specialized type which, with the field emission electron gun mounted, attains higher resolution and magnification.

By adding attachments such as the X-ray detector for elemental analysis, the backscattered electron detector for observing the composition, and the EBSD (electron backscattered diffraction) for crystalline analysis, it is possible to further expand the measurement versatility.