It is well known that semiconductor distributed feedback lasers possess a one-dimensional lattice, and that the forward-propagating wave undergoes Bragg reflection due to this grating, being diffracted to the opposite direction. The resulting forward and backward-propagating waves couple with each other to generate a standing wave, forming a cavity. This is equivalent to the fact that in a one-dimensional photonic crystal the cavity loss is smallest at the band edges, which are at both ends of the photonic bandgap, giving rise to a state that causes oscillation. When this idea is extended to photonic crystals with two-dimensional per iodicity, one can make use of the coupling of optical waves due to Bragg reflection within the two-dimensional plane in order to form a standing wave state that covers the entire surface of the plane [1,2] . As a result, it becomes possible to obtain an oscillation mode with an electromagnetic field distribution that is perfectly defined at each lattice point in the two-dimensional crystal. The optical output can be diffracted in the direction perpendicular to the plane of the crystal, thus realizing a sur face-emitting character istic. Two-dimensional photonic crystals hence enable the construction of surface-emitting lasers in which not only the longitudinal mode of lasing is defined, but also the beam pattern, usually referred to as the transverse mode. Furthermore, it becomes possible to realize a novel laser that oscillates in a single longitudinal and transverse mode, no matter how large the surface area is, which surpasses a conventional concept in the field of laser research.
The first semiconductor laser to be based on this principle was realized in 1999 [1] . Since then, in addition to the demonstration of roomtemperature continuous lasing, it has been shown that two-dimensional photonic crystals can generate beams with controlled polarization and patterns; for example, a doughnut-shaped beam can be formed, which is expected to be focusable to sizes smaller than the wavelength [2-6]. The other notable recent developments using this principle are the realization of a current-injection-type blue-violet surface-emitting operation and electronically beam-steering operation [7, 8]. We discuss the current state of the art in the following sections.

Figure 1 shows an example of a laser based on the two-dimensional photonic crystal band-edge effect. This laser consists of two wafers, A and B; wafer A includes an active layer for the injection of electrons and holes, and a photonic crystal as the upper-most layer. The integration of wafers A and B results in the photonic crystal being sandwiched to complete the device. As shown in the insert of Fig. 1, this photonic crystal has a square lattice structure and is designed such that the periodicity in the Г-X direction matches the emission wavelength in the active layer. In this design, light propagating in a certain Г-X direction is Bragg diffracted to the opposite (-180°) direction, as well as to the -90° and 90° directions; the four equivalent light waves propagating in the Г-X direction then couple to form a two-dimensional cavity. More precisely, higherorder Bloch waves in addition to these fundamental four waves are involved for the construction of twodimensional cavity mode (see Fig. 2(a)). Figure 2(b) shows the photonic band structure of this cavity. The lasing mode occurs at the band edges indicated by the red dots at the Г-points of the four bands, A, B, C and Kyoto 615-8510, Japan, E-mail: snoda@kuee.kyoto-u.ac.jp (2014) Vol. 49 No. 1 JEOL News 30 D. Detailed analysis [9] indicates that either of band edges in bands A and B yields the highest Q factor, and that lasing oscillation most readily occurs there. The output beam can be coupled out to the direction normal to the photonic crystal surface. 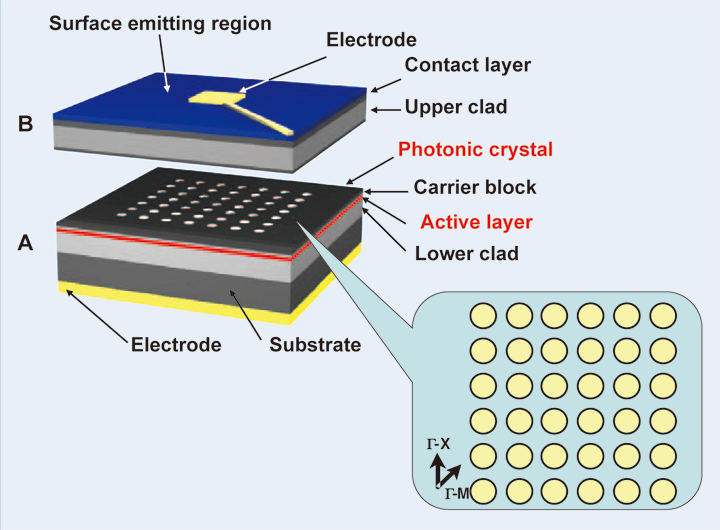 Fig. 2 (a) Bloch waves which construct a two-dimensional cavity mode, and (b) photonic band structure. 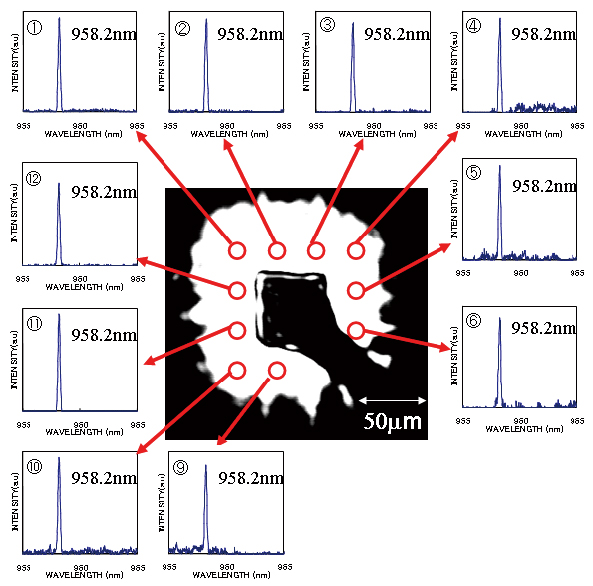 Fig 3. Near-field pattern with lasing spectra at various points of the device. 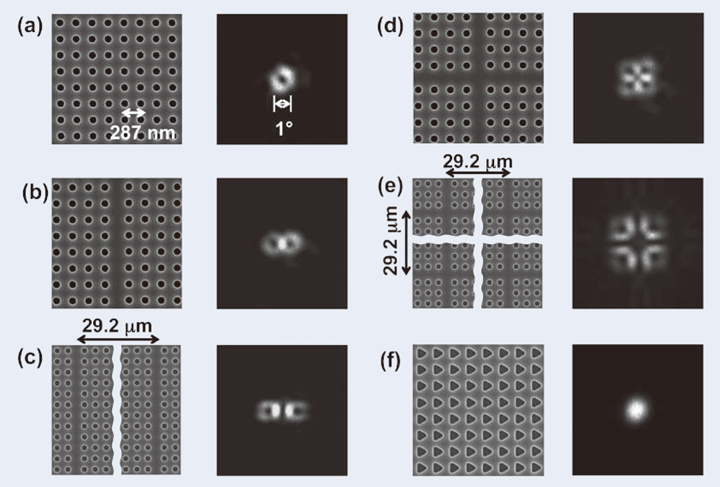 In the previous section, the photonic crystal was embedded in the device by a wafer-bonding technique, where bonded interface may contain many defect states which absorb the lasing light and make it difficult to realize high power operation. To avoid such degradation of performance, we changed the method to introduce the photonic crystal into the device from a wafer bonding to a crystal growth technique such as organometallic vapor phase epitaxy (OMVPE) [10,11], and found that the air holes of photonic crystal can be retained even by the crystal growth technique. Figure 6 (a) shows the schematic of the device fabricated by two-step OMVPE. Note that the growth direction was downward. Figure 6 (b) shows a plan-view scanning electron microscope (SEM) image of the photonic crystal with right-isosceles-triangle-shaped air holes before the crystal growth. A typical crosssectional SEM image of a row of air holes embedded by OMVPE is shown in Fig. 6(c). It is clearly seen that the air holes were successfully embedded in the device, where the air holes become narrower towards the lower side of the device, whereas the upper parts of the air holes maintain an almost uniform shape with vertical side walls.
I then describe the lasing characteristics of the fabricated device [12] under the room-temperature (RT) continuous -wave (CW) condition . The corresponding experimental results are shown in Fig. 7(a) – (c). A maximum CW output power of 1.5 W at 2.5 A was achieved with a narrow, single-lobed beam of low divergence. When the output power was less than 0.5 W, the beam quality was quantitatively evaluated by measur ing the value of M2. For an ideal Gaussian beam, M2 is known to be unity, but it increases when the beam quality is degraded due to the transverse multimode. Measurements of M2 were performed under room-temperature CW conditions, and we found that M2 was kept almost at ~1.0 in both the x- and y-directions up to a power up to 0.5 W, indicating that a fundamental single transverse mode is maintained. Note that the beam divergence angle was less than 3° even at 1.5W power level.
Lasers with such a nar row beam divergence should enable unique applications that do not require any lens. We examined the direct irradiation of a sheet of paper placed 8.5 cm from the PCSEL to demonstrate such lens-f ree potential under CW operation at 25 °C. The light output was set to 0.86 W at a current of 1.7 A. The paper was burnt, forming a small hole immediately after radiation, as shown in Fig. 8. Although this is just a simple demonstration, it shows the potential of lens-free applications. 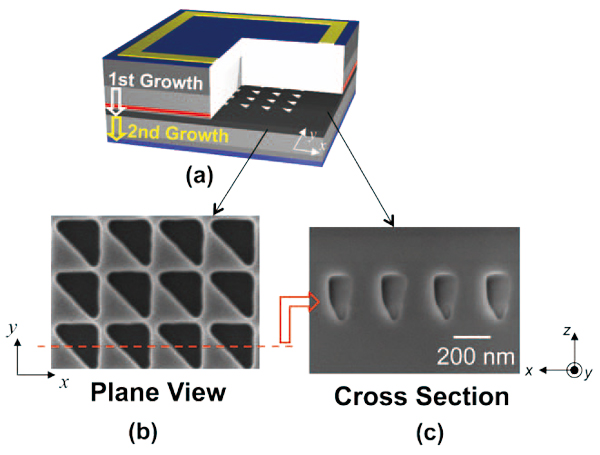 Fig. 6 (a) Schematic of the device fabricated by two-step OMVPE. (b) plan-view SEM image of the photonic crystal with right-isosceles-triangle-shaped air holes formed by electron beam lithography (JEOL JBX-6300FS) and dry etching. (c) A typical cross-sectional SEM image of a row of air holes embedded by OMVPE.

Fig. 7 Photograph taken immediately after direct radiation of the laser on a sheet of black paper placed 8.5 cm from the device.
Lasing characteristics of the device fabricated by two-step OMVPE. (a) I-L characteristics, (b) lasing spectra, and (c) farfield patterns at various current injection levels. 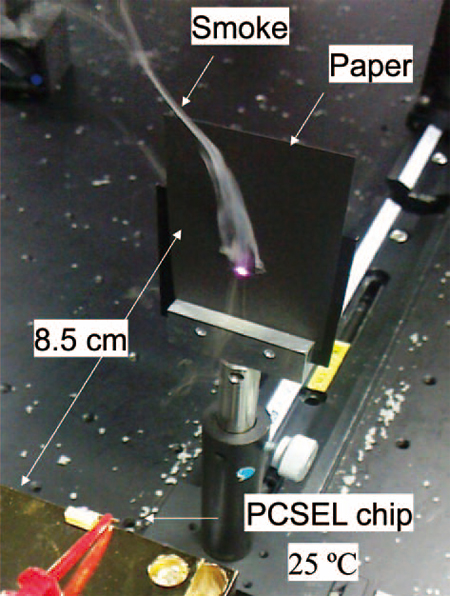 Fig. 8 Photograph taken immediately after direct radiation of the laser on a sheet of black paper placed 8.5 cm from the device.

I have described the current status and recent developments in the field of photonic-crystal lasers. It has been shown that the band-edge effect of twodimensional photonic crystals enables large-area single longitudinal and t ransver se mode lasing oscillation, as well as complete control over the beam patterns obtained. It has been also described that a device with an output power exceeding 1.5 watt under CW condition at RT. Our work represents an important milestone for innovation in the field of lasers because it provides a route towards overcoming limitations in applications that suffer from low beam quality, which opens the door to a wide range of applications in material processing, laser medicine, nonlinear optics, sensing and so on.

The author thanks members of Noda’s Lab., Kyoto University, and Rohm and Hamamatsu Photonics for the collaboration. This work was supported in part by JST, ACCEL & CREST, C-PhoST, MEXT, Japan.