Secondary ion mass spectrometry (SIMS) is an analytical technique that is used to look at organic compounds on sample surfaces. When SIMS is used for mass spectrometry imaging (MSI), it can produces high spatial resolution images for the ionized analytes. However, SIMS often produces complicated mass spectra as a result of fragmentation of the parent compounds. This fragmentation is caused by excess internal energy from the primary ion beam used for ionization. Recently, MSI techniques that use soft ionization methods like matrix assisted laser desorption/ionization(MALDI) and surface assisted laser desorption/ionization (SALDI) have been used to produce intact molecular weight information that more clearly show the distribution of organic compounds on sample surfaces. These techniques are particularly advantageous for the analysis of sample surfaces with organic compound mixtures. For MALDI-MSI, matrix solution is sprayed onto the sample surface to enhance the ionization efficiency of the organic compounds. However, the application of matrix solution onto the surface can cause several problems: (i) the solution can cause the target compounds to migrated thus changing their distribution on the surface and (ii) the ion intensities can fluctuate as a result of variations in matrix crystal formation (tens of microns). As a result, the practical spatial resolution is reduced, and the probing depth is difficult to determine. Alternatively, for Ag SALDI-MSI silver nano-particles are deposited without solvent onto a sample surface at a 10 nm thickness (Figure 1) thus improving the spatial resolution and making probing depth determination easier.
In this report, we made a double-layer organic thin film with different thicknesses to monitor the probing depth of Ag SALDI-MSI. We also performed depth profiling of the same sample using X-ray photoelectron spectroscopy (XPS) combined with a gas cluster ion beam (GCIB).

The JMS-S3000 "SpiralTOF™" (Figure 2a) is a MALDI time-of-flight mass spectrometer (TOFMS) that has a spiral ion trajectory made by four electrostatic sectors (Figure 2b). The total ion flight path length for the SpiralTOF™ is 17 m (five times longer than conventional TOFMS) thus allowing it to achieve the highest mass resolution commercially available for a MALDI TOFMS system. Additionally, interference from chemical backgrounds are reduced by eliminating post source decay ions in the electrostatic sectors. These features are advantages for detecting minor components on contaminated sample surfaces. 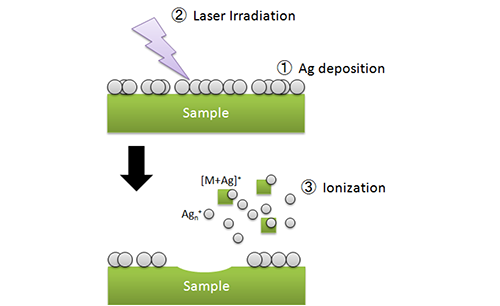 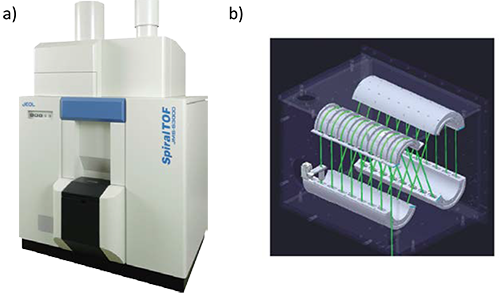 The JPS-9030 is a XPS system that can be used to analyze the elemental composition and chemical bonding state of a sample surface (Figure 3). X-rays are irradiated into the sample surface to generate photoelectrons from different surface analytes (Figure 4). Depth profiling of the elemental composition and chemical bonding state is possible when XPS and GCIB are combined. Recently, these techniques have been applied to organic samples that are easily damaged by using gas cluster ions for ion etching. 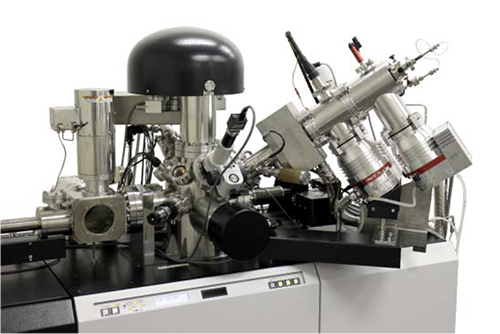 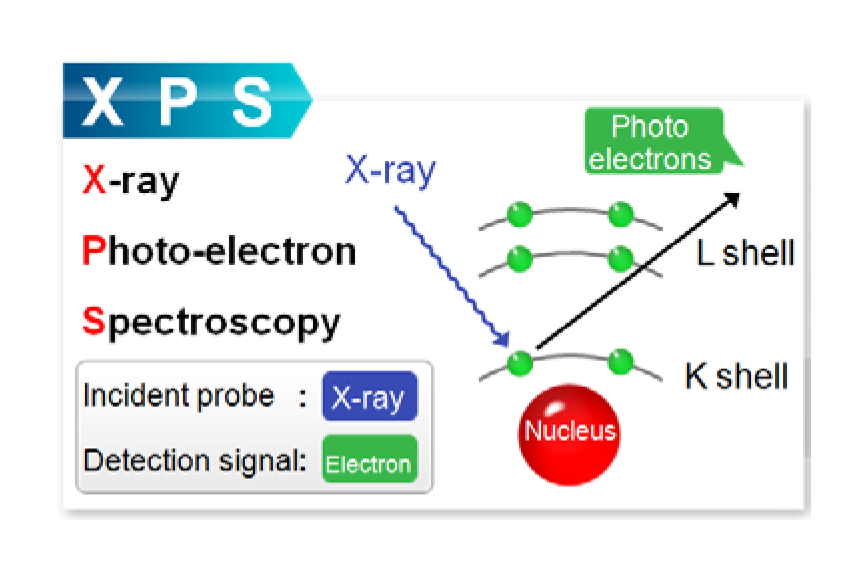 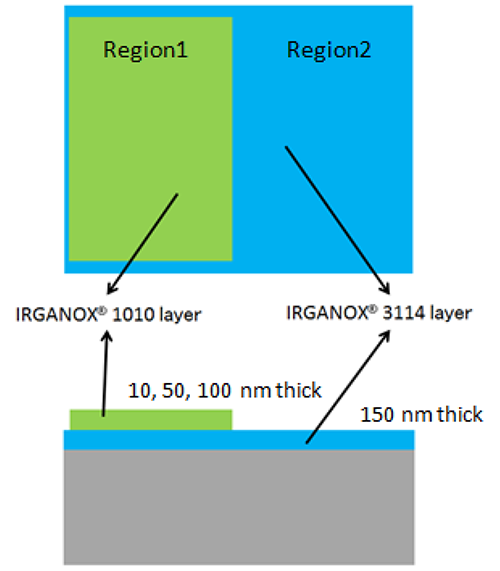 Double-layer thin films were made using IRGANOX 1010 (C73H108O12) and IRGANOX 3114 (C48H69N3O6). First, a 150 nm thickness IRGANOX 3114 layer was deposited on to the Si wafer. Next, IRGANOX 1010 was deposited onto half of the IRGANOX 3114 film at a thickness of 10, 50 or 100 nm. This double-layer film IRGANOX 1010/3114 is referred to as Region 1, while the IRGANOX 3114 only region is referred to as Region 2 (Figure 5) . The silver was deposited onto Region 1 and 2 at a thickness of 10 nm. Afterwards, a FE SEM JSM-7610F (Figure 6a) was used to look at the silver nano-particles on sample surface. An acceleration voltage of 5 kV was used to observe secondary electron images (Figure 6b). The island-shaped gray regions in the SEM image are the actual silver nano-particles. This image shows that the nano-particles were distributed uniformly onto the sample surface. It should be noted that the field of view for the SEM image is much smaller than the laser diameter (20 μm) used during Ag SALDI-MSI.

The depth profiling of IRGANOX 1010/3114 was performed using SALDI-MSI and XPS with GCIB. The measurement conditions are listed below. During the XPS measurements, the spectra were acquired for every 10 nm from IRGANOX surface to Si wafer by etching with the Ar cluster ion beam. 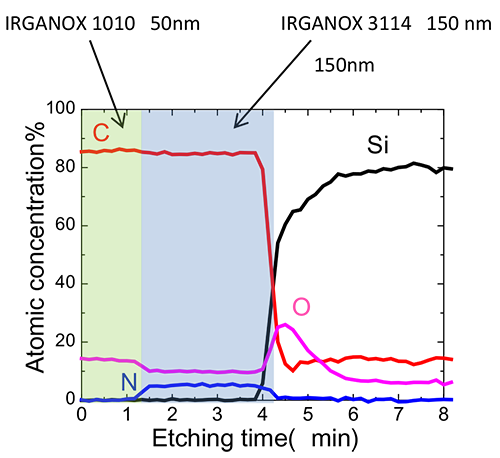 XPS was combined with GCIB to determine the depth profile of IRGANOX 1010(50nm)/3114(150nm). The variation of atomic concentrations for carbon, nitrogen, oxygen, and silicon are shown in Figure 8. The atomic concentration of silicon was used to monitor for the complete removal of the organic layer by Ar cluster ion etching, which took approximately four minutes (see Figure 8). The atomic concentration of nitrogen, was used to differentiate the IRGANOX 3114 (nitrogen containing) from the IRGANOX 1010 (no nitrogen). The combination of XPS and GCIB was used for depth profiling at 10 nm increments while monitoring for differences in elemental composition ratios for the target layers.
This 10 nm depth resolution provides an advantage over the Ag SALDI-MSI, which can only obtain the average information at a 50 nm depth for organic layers, as described previously. On the other hand, if the elemental composition ratios for each layer show minimal differences, then it is important to analyze the surface with Ag SALDI-MSI in order to identify the actual molecules present on/in the surface.

We would like to thank Prof. Matsuo and Dr. Fujii at Kyoto University for providing the double layer thin films.