Various kinds of additives are used in a polymer, such as an antioxidant, a light stabilizer, and an ultraviolet absorber. Because a polymer’s properties depend on the additives in the raw material, it is important to understand these additives. Matrix-assistance laser desorption/ ionization time-of-flight mass spectrometer (MALDI-TOFMS) JMS-S3000 SpiralTOF™ is widely used in polymer analysis. High-energy collision–induced dissociation (HE-CID) measurement with the TOF/TOF option is also useful in analyzing the structures of additives.
SpiralTOF™ can achieve a high precursor ion selection with a revolution of 17 m. Fragmentation derived from HE-CID can be observed only due to the ions from post-source decay (PSD), these fragment ions can be eliminated by the four electrostatic sectors that constitute the spiral trajectory. In this Applications Note, we report on polymer structural analysis by comparing fragmentation patterns in the product ion spectra of IRGANOX 1076 (BASF) M+· and [M+Na]+.

For the sample, we used the additive IRGANOX 1076 (10 mg/ml in tetrahydrofuran [THF]) in a commercially available additive kit. For the matrix, we used 2,5-hydroxybenzoic acid (DHB; 20 mg/ml in THF). HE-CID measurements were carried out for all ion species (M+· and [M+Na]+) confirmed by the mass spectrum, and the product ion spectra were acquired.

The mass spectrum of IRGANOX 1076 is shown in Figure 1. We observed ion species corresponding to M+· and [M+Na]+ at m/z 530 and 553, respectively. Two kinds of monoisotope ions were selected to obtain a product ion spectrum.

Product ion spectra of IRGANOX 1076 m/z 530.5 (M+· ) and m/z 553 ([M+Na]+) measured with HE-CID are shown in Figure 2(a) and (b). We compared the fragmentation channels of both types of ions. Peaks observed below m/z 219 are indicated by the dotted red line, common fragmentation channels from M+· and [M+Na]+ by the solid red line. We estimated the peaks to be fragment ions without sodium. In particular, the peak at m/z 219 was estimated to be a fragment ion from the phenolic side with a tert-butyl group (t-Bu). Those observed at m/z 233 and 259 in Figure 2(a) and (b) have a mass difference of 23 u. It is understood that these fragment ions indicate the same fragmentation channel from M+· and [M+Na]+. Furthermore, in the product ion spectrum of [M+Na]+, we observed peaks at intervals of 14 u at m/z 320–540. These are peaks were derived from alkyl chain cleavage by charge remote fragmentation (CRF), which is characteristic of HE-CID. We regularly observed mass differences at intervals of 14 u, suggesting that there was no unsaturated bond in the alkyl chain. 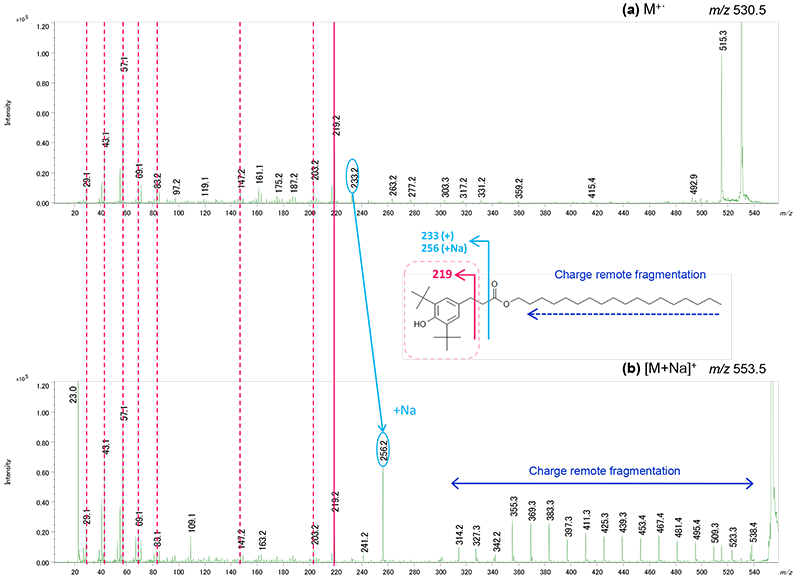