Electron ionization(EI) is a hard ionization method that is commonly used with gas chromatography mass spectrometry(GC-MS). The mass spectral fragmentation patterns produced by EI are used for library database searches to identify compounds. Conversely, soft ionization methods like field ionization(FI) tend to produce clear molecular ions with minimal fragmentation. When high-resolution MS is used with these ionization techniques, the accurate masses for the fragment ions produced by EI and the molecular ions produced by soft ionization provide an additional dimension of information for the analytes. Combining the exact mass information with the results of conventional library search can enhance the accuracy of identification compared to the use of library search alone. In this work, we introduce the msFineAnalysis software and use it to automatically combine data acquired by GC/EI and GC/soft ionization for the qualitative analysis of compounds produced by the pyrolysis of a vinyl acetate resin.

A commercial vinyl acetate resin was used as a model polymer sample. The JEOL JMS-T200GC equipped with a combination EI/FI ion source was used for the analysis. A 3030D pyrolysis unit(Frontier Laboratories) was installed on the GC inlet and used for pyrolyzing the sample. Table 1 shows the measuring conditions of the pyrolysis GC/TOFMS. The resulting EI and FI data were then automatically analyzed by using the new JEOL msFineAnalysis software. The resulting report was then compared to conventional GC/EI qualitative analysis. 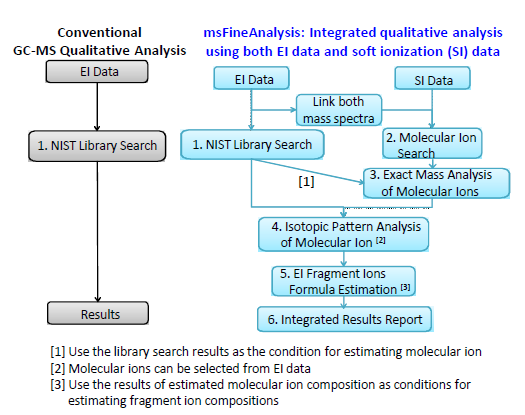 Qualitative Analysis Work Flow:
Figure 1 shows the operational flow chart for the integrated analysis steps used for the JEOL msFineAnalysis software(chart on the right). First, the data is acquired by using EI and soft ionization(SI), and all peaks and associated mass spectra are detected in the chromatograms. Afterwards, the mass spectra produced by these ionization methods are linked using their retention times, and these linked mass spectra are recorded as single components. Next, the EI mass spectrum is used for the library database search (1), and the SI mass spectrum is used to identify the analyte molecular ion (2). Afterwards, the molecular ion is  used for exact mass analysis to estimate possible elemental compositions, and these candidate formulas are then narrowed down by using the EI library search results (3). Next, the molecular ion is subjected to isotopic pattern analysis to help further narrow down the candidate formulas (4). Each candidate formula is then used as the search constraints for the exact mass analysis of the EI fragment ions (5). If the molecular ion formula candidate is incorrect, the EI fragment ions will not result in many(if any) compositional formulas, thus indicating that the molecular ion formula is not a good candidate for that particular analyte. These results are then output as an integrated qualitative analysis report (6).
On the other hand, the conventional qualitative analysis work flow that is commonly used for GC-MS is shown on the left side of the chart.  This procedure only involves acquiring EI data and then doing database searches for each analyte. 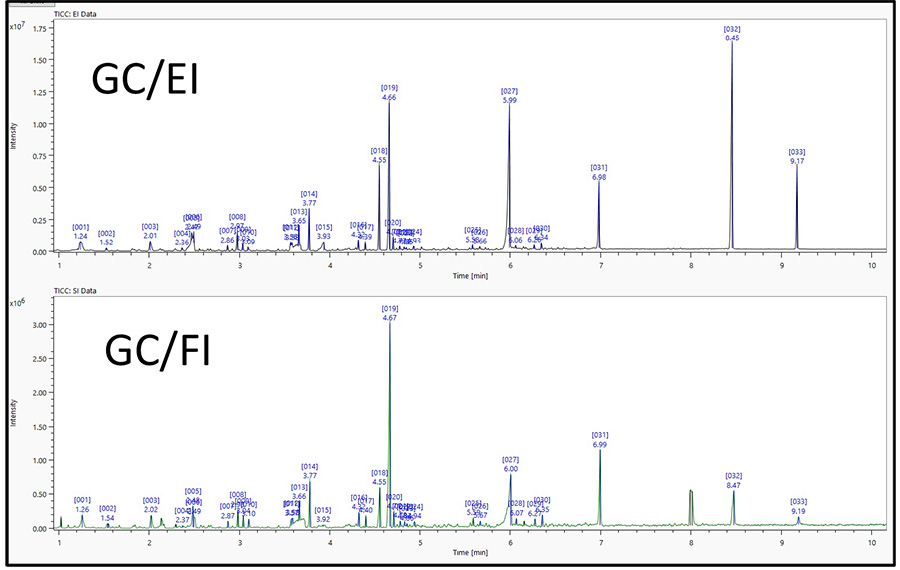 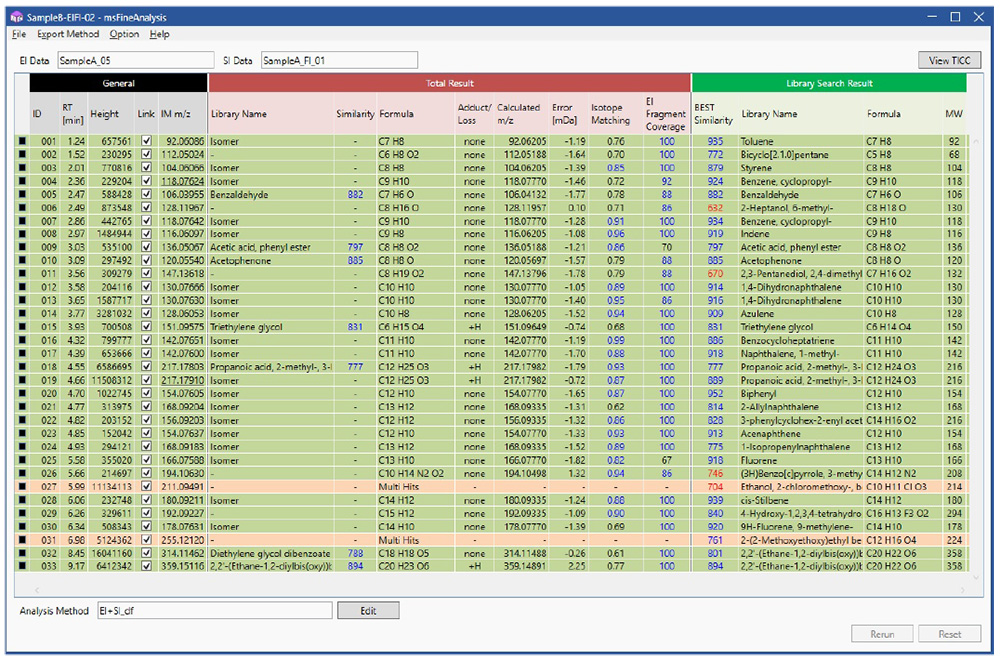 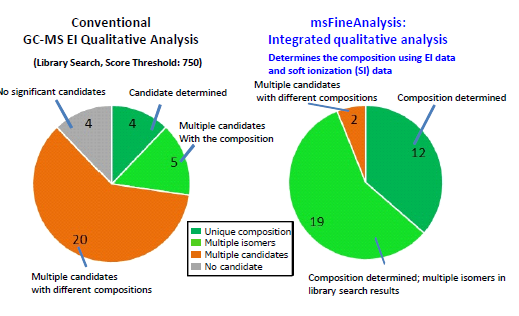 The msFineAnalysis Auto Analysis function detected 33 components in the GC/EI and GC/FI measurements(Figure 2) that were automatically linked using their retention time. The Auto Analysis function then automatically used the steps in Figure 1 to analyze the linked data, and the results were output as a color-coded table as shown in Figure 3. Each color indicates a level of confidence for the identity of the compound:
Green:   A molecular formula candidate was uniquely identified.
Orange: Multiple molecular formula candidates were identified.
White:   No significant molecular formula candidates were identified.
The components classified as orange or white can be further reviewed manually to potentially identify a unique candidate formula. In this example, the msFineAnalysis Auto Analysis function was able to uniquely determine the molecular compositions for over 90% of the components which is a significant improvement over the conventional qualitative analysis method in which only ~1/4 of the observed components were identified with a unique molecular formula(Figure 4). Additionally, the EI fragment ion formulas, which were obtained simultaneously, resulted in additional structural information about the sample molecules that further supported the identified molecular composition.

The msFineAnalysis qualitative analysis method combines GC/EI and GC/FI accurate mass data to produce highly accurate qualitative results. For the components registered in library databases(match factor score: high), these results are cross referenced with the accurate mass molecular formula identification. Additionally, this software makes it possible to estimate molecular formulas for unknown components that are not registered in the library database(match factor score: low), which can be difficult to identify when using only the conventional analysis method(chart on the left of Figure 1). As a result, this integrated analysis method is capable of determining molecular formulas and fragment ion formulas from exact masses, regardless of the level of match factor score, in order to narrow down the formula candidates, thus providing an effective tool for GC/MS qualitative analysis.