High molecular weight polymers are often MS-silent due to their inherent high dispersity (ĐM) or detected in the high mass range with low resolving power. High-resolution mass spectrometry (HRMS) is indeed limited to the low mass range (< 3000 Da) for an unambiguous evaluation of the nature of repeating units and/or end-groups or the isolation of isobaric compounds. An "on-plate" alkaline degradation has thus been developed as a sample pre-treatment on the MALDI target with tenths of ng of polymer to cut long industrial polyester chains into short oligomers amenable to MALDI-HRMS [1]. The complexity of the associated mass spectra can be greatly reduced with the appropriate resolution-enhanced Kendrick mass defect (KMD) analysis using the "fraction base" option of msRepeatFinder to produce compositional maps.

Poly(3-hydroxybutyrate-co-3-hydroxyvalerate) (PHBV, 12 mol% 3HV, Mn=1.4×105 g mol-1, ĐM=2.5) was from Sigma-Aldrich (St. Louis, MO, USA) while all other chemicals and solvents were from FUJIFILM Wako Pure Chemical Corporation unless otherwise mentioned. 1 μL of PHBV (1 mg mL -1 in THF) was drop-casted on a disposable MALDI target plate (Hudson Surface Technology, NJ, USA). 1 μL of sodium hydroxide in methanol-d4 at 10 mg mL-1 was further deposited and left to air-dry. The excess alkaline reagent was washed with distilled water. 1 μL of 2,4,6-trihydroxyaceto-phenone (Protea Biosciences, WV, USA) in THF at 20 mg mL -1 was applied on the sample spot. Mass spectra were recorded with a JMS-S3000 SpiralTOF™ mass spectrometer. Plots were computed using msRepeatFinder 3.0 from the peak list exported using msTornado™.

The alkaline on-plate degradation of PHBV releases up to six short copolyester series readily detected in MALDI-MS [1]. (Fig. 1A). With the variation of end-groups, 3HB and 3HV contents within one given series and the isotopic patterns, peak assignments are non-trivial neither from the mass spectrum nor the regular KMD plot [2] as series overlap (Fig. 1B).

Contrary to the condensed regular KMD plot, the different ion series cover the entire range of KMD (from -0.5 to 0.5) in the fraction base KMD plot computed with 3HB/135 (Fig. 2) [3]. Within one cluster, points differ by their content in 3HB (horizontal alignment, base unit) and in 3HV (oblique alignment) while the isotopic composition is different from one cluster to the other (12C or 13Cx, Fig. 2 with color coding). All the peaks detected in the mass spectrum are thus advantageously separated or grouped for a rapid assignment.

Fig. 2. "Fraction base" KMD plot with a fractional base unit 3HB/135 using msRepeatFinder.

The series I and V almost overlap in the previous fraction base KMD plot (Fig. 2) preventing their separation/isolation. To circumvent this issue, the monoisotopic cluster is extracted (grouping mode, Fig. 3A) while the other points are hidden to enhance the visualization (Fig. 3B). The two monoisotopic ion series are deconvoluted by changing the fraction (3HB/117, Fig. 3C). All the points are fully separated, being monoisotopic co-oligomers (12C) with a varying content in 3HB (horizonal alignment) and 3HV (oblique alignment, structures in insets). 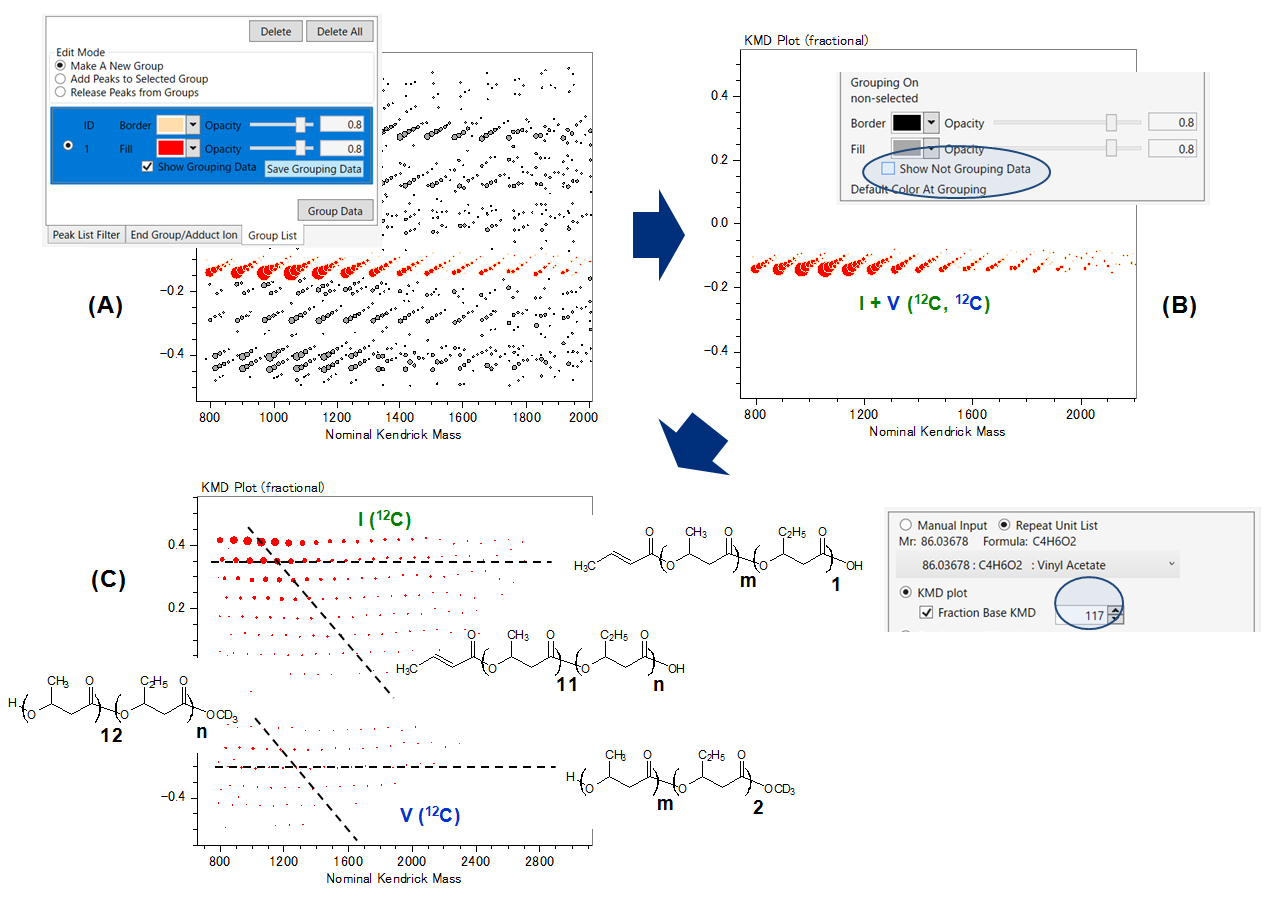 Using the full dataset reduces the risk of missing minor ion series but the isotopes complicate the data processing with several clusters for a given copolymeric series (Fig. 2). The mass spectrum may be instead automatically deisotoped using msTornado™ to simplify the visualization. However, and in spite of deisotoping, the regular KMD plot still fails at separating the ion series (Fig. 4A). Instead, the fraction base KMD plot computed with another fractional unit 3HB/92 (Fig. 4B) greatly separates the six copolymeric ion series in a single plot further allowing a rapid selection/assignment of co-oligomers with unrivalled viewability [1]. The fraction base differs from the previous case (135 or 117 to 92) as the need for separation is different (content in 3HB, 3HV and end-groups only, no isotopes) [5]. 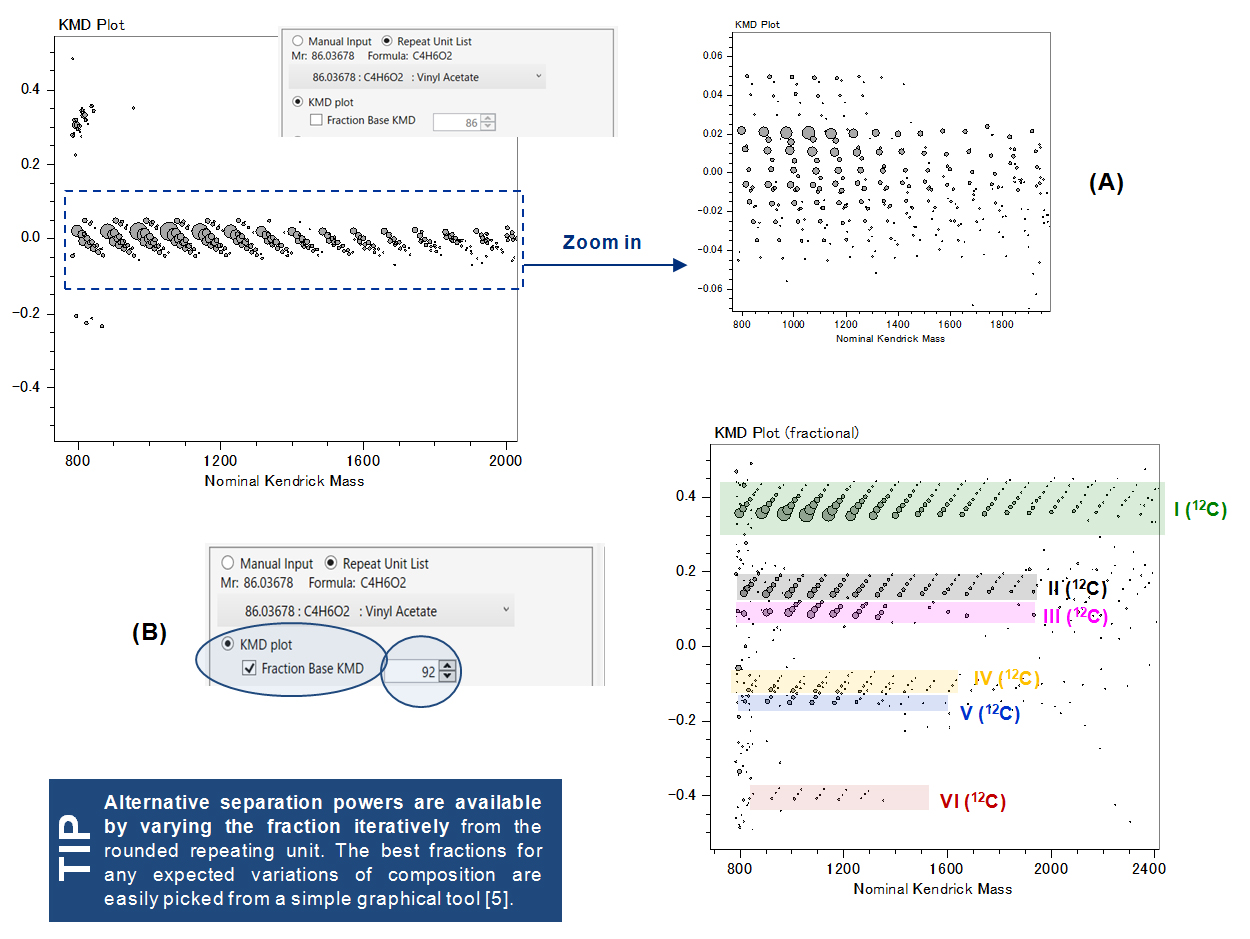 Fig. 4. (A) regular and (B) fraction base KMD plot (3HB/92) from the deisotoped mass spectrum using msRepeatFinder.

Different KMD plots are computed from the same mass spectrum by varying the fractions to produce favorable compositional maps, depending on the needs for visualization (e.g. separation by 13C isotopes, end-groups, co-monomeric content, or their combination). Using the on-plate alkaline degradation (sample pre-treatment for high molecular weight samples) and the msRepeatFinder filtering capabilities (data processing), the "fraction base KMD" analysis is a very versatile tool suitable for numerous copolymeric datasets.

This application note is written based on the results of a joint research project with Sayaka Nakamura, Thierry Fouquet and Hiroaki Sato from the Research Institute for Sustainable Chemistry, National Institute of Advanced Industrial Science and Technology (AIST).