The JMS-S3000 “SpiralTOF™” is a time-of-flight mass spectrometer (TOFMS) employing matrix-assisted laser desorption ionization (MALDI).
MALDI is a soft ionization technique that generally keeps the ions intact during ionization. However, spontaneous fragmentation after ionization, called post-source decay (PSD), is also well known to occur during MALDI analysis.
In particular, as the analyte molecular weight increases, the PSD effect becomes more pronounced which complicates the resulting mass spectra and reduces the overall analyte signals. The SpiralTOF™ has a 17m folded ion optical path that automatically decreases the amount of PSD ions reaching the detector, thus minimizing the complexity of the mass spectra. Additionally, choosing an appropriate matrix can decrease PSD, which in turn can improve the intact protein signal.
In this study, we used the JMS-S3000 to test several matrices for PSD effects and to measure high resolution mass spectra of intact insulin, ubiquitin and cytochrome C.

Three proteins – Insulin (10pmol/μl 1%TFA), ubiquitin (100pmol/μl water) and cytochrome C (10pmol/μl water) – were used for these experiments.
ClCCA(4-chloro-α-cyanocinnamic acid) [1] was dissolved in 70% acetonitrile/0.1%TFA (10mg/ml). Additionally, insulin was also measured using CHCA (α-cyano-4-hydroxycinnamic acid) and SA (sinapinic acid), which are commonly used matrices for protein measurements.
A mixed solution of the sample and each matrix was spotted onto a target plate and air-dried. The mass spectra were acquired by using SpiralTOF and LinearTOF positive ion modes.

As a starting point, LinearTOF mode was used to measure insulin with each matrix (CHCA, SA, and ClCCA) as shown in Figure 1.
In each case, the [M+H]+ peak showed a good S/N ratio for all matrices when using equivalent measurement conditions. These LinearTOF results show the state of the ions immediately after the acceleration region, where the PSD effects are not typically significant.
Only the CHCA mass spectrum peak showed a broader peak shape which indicates a relatively larger PSD effect. Next, these spots were remeasured in SpiralTOF mode, and the resulting mass spectra are shown in Figure 2.
The mass spectra for all matrices showed [M+H]+ peaks with good isotopic peak separation. However, the CHCA mass spectrum showed a lower S/N ratio than the SA and ClCCA mass spectra, thus supporting the LinearTOF mode observation that there is higher PSD effect for this particular matrix. The SA and ClCCA mass spectra both showed insulin peaks with good S/N ratio for the same measurement conditions. In particular, the ClCCA insulin peak showed a much higher S/N ratio than the other 2 matrices, indicating that this matrix is better for minimizing PSD effects. 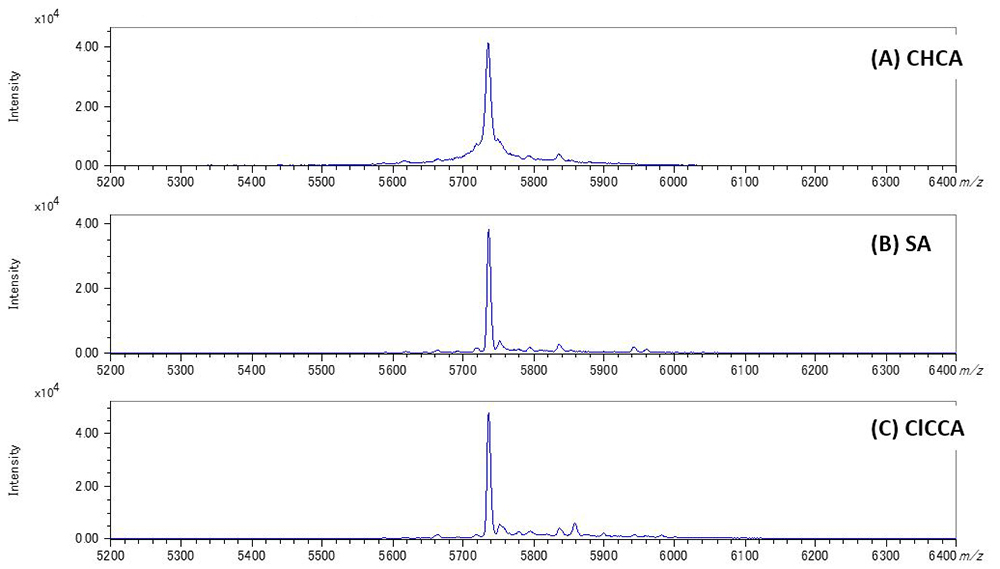 Figure 1. Mass spectra of insulin acquired by using LinearTOF mode with (A) CHCA, (B) SA and (C) ClCCA matrix conditions. 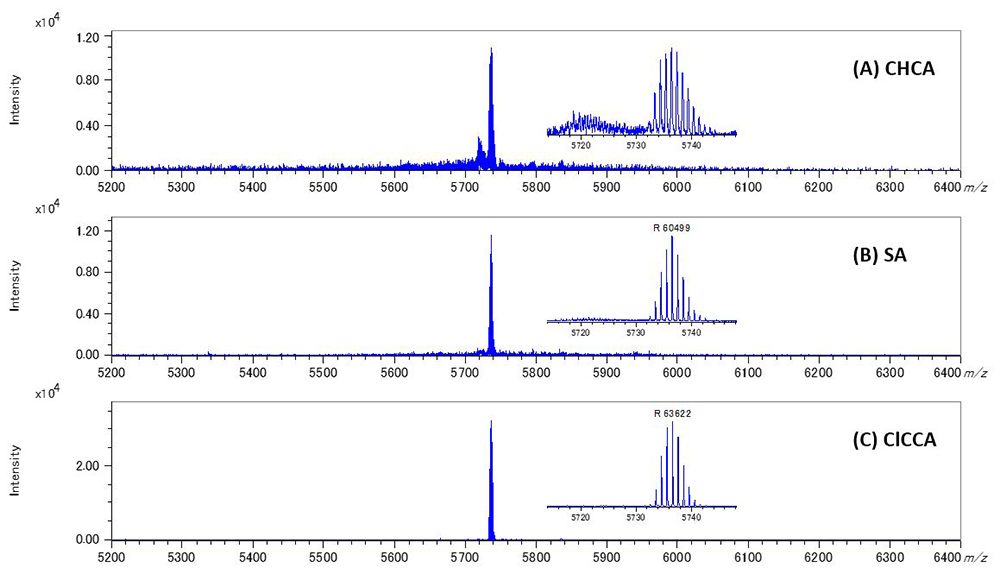 Figure 2 Mass spectra of insulin acquired by using SpiralTOF mode with (A) CHCA, (B) SA and (C) ClCCA matrix conditions.

Next, the mass spectra of ubiquitin and cytochrome C were acquired in SpiralTOF mode using ClCCA (Figure 3).
The [M+H]+ ions were observed for both proteins with good S/N ratios. Additionally, the isotopic peaks of ubiquitin and cytochrome C were well resolved, and the mass resolving powers for each compound were approximately 48000 and 36000, respectively.

The SpiralTOF™ is effective for the high resolution measurement of intact proteins. Choosing an appropriate matrix compound like ClCCA can help reduce PSD effects which in turn enhances the measurement of proteins with molecular weights over 5000Da.