Electron ionization (EI) is a hard ionization method that is commonly used with gas chromatography mass spectrometry (GC-MS). The mass spectral fragmentation patterns produced by EI are used for library database searches to identify compounds. Conversely, soft ionization methods like field ionization (FI) tend to produce clear molecular ions with minimal fragmentation. When high-resolution MS is used with these ionization techniques, the accurate masses for the fragment ions produced by EI and the molecular ions produced by soft ionization provide an additional dimension of information for the analytes. Combining the exact mass information with the results of conventional library search can enhance the accuracy of identification compared to the use of library search alone.

Fatty acid methyl esters (FAMEs) are crucial for determining the fat content in food. Being environmentally friendly, they are also increasingly used as bio-diesel fuels. Many of the FAMEs are unsaturated with double bonds in the alkyl chains. As the number of double bonds increases (more unsaturation), the EI measurements tend to lack molecular ions. In this work, we measured a standard sample containing multiple FAMEs using EI and FI to detect their molecular ions. The resulting data was further examined by using msFineAnalysis to produce an integrated report for these compounds in which the library database search was combined with the molecular ion exact mass analysis to produce a qualitative identification of these compounds.

A commercial 37-component FAME standard mixture (Restek, 200-600 ng/μL) was used as a sample. Table 1 shows the measurement conditions used for the GC/EI and GC/FI analyses.

Figure 1 shows the TICC for the GC/EI and GC/FI measurements. While the sample contains 37 components, there were only 36 peaks observed in each chromatogram. The cis-4,7,10,13,16,19-docosahexaenoic acid methyl ester (C23H34O2) and the heneicosanoic acid methyl ester (C22H44O2) coelute with exactly the same retention time (RT) at 38.8 min. However, the FI mass spectrum for this peak showed the molecular ions for each component (Figure 2). Because the JMS-T200GC is always measuring high-resolution mass spectra, these components, which are not quite separated in the chromatogram, can be identified by mass separation. 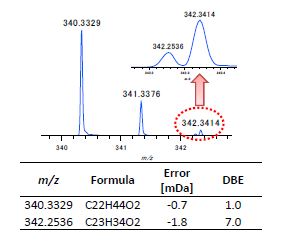 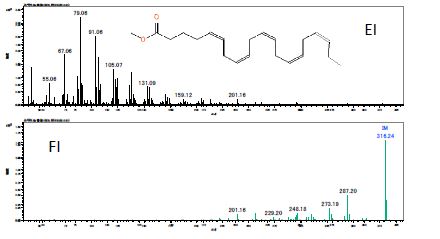 The msFineAnalysis integrated analysis method produces highly accurate qualitative analysis results for the FAMEs by combining the library search results and molecular formula estimation. This combination of using GC/EI and GC/FI measurements together for qualitative analysis is particularly important for FAMEs as these types of compounds do not produce molecular ions for EI, making it difficult to use database searches alone for identification.

Please see the PDF file for the additional information.
Another window opens whe you click.