Electron ionization (EI) is a hard ionization method that is commonly used with gas chromatography mass spectrometry (GC-MS). The mass spectral fragmentation patterns produced by EI are used for library database searches to identify compounds. Conversely, soft ionization methods like field ionization (FI) tend to produce clear molecular ions with minimal fragmentation. When high-resolution MS is used with these ionization techniques, the accurate masses for the fragment ions produced by EI and the molecular ions produced by soft ionization provide an additional dimension of information for the analytes. Combining the exact mass information with the results of conventional library search can enhance the accuracy of identification compared to the use of library search alone.
In 2018, we announced the msFineAnalysis software which was designed to automatically integrate two types of data acquired by EI and soft ionization. Recently, we developed msFineAnalysis Version 2, an enhanced version with additional features. msFineAnalysis Version 2 incorporates two new features: Chromatographic Deconvolution and Group Analysis. In this work, we use the group analysis capabilities of the software to evaluate the pyrolysis GC-MS results for a vinyl acetate resin which showed in MSTips No. 275.

Figure 1 shows the C6H5+ fragment ions that were detected in the pyrolysis GC-MS results for the vinyl acetate resin. This fragment ion is characteristic for aromatic compounds. The table on the right shows that there are 26 compounds containing C6H5+. The view on the left allows the operator to quickly identify where the components containing this ion were detected. The view on the left top shows the GC/EI data with the TICC marked by a solid black line.  The bottom left view shows the soft ionization data with the TICC marked by a solid green line. The blue peaks in both views represent the components containing C6H5+ extracted from the chromatographic deconvolution result. The operator can select an ion such as C6H5+ from the table and click the OK button at the bottom right of the GUI to immediately create a C6H5 tab, thus allowing for extraction of the components containing that specific fragment (Figure 2). 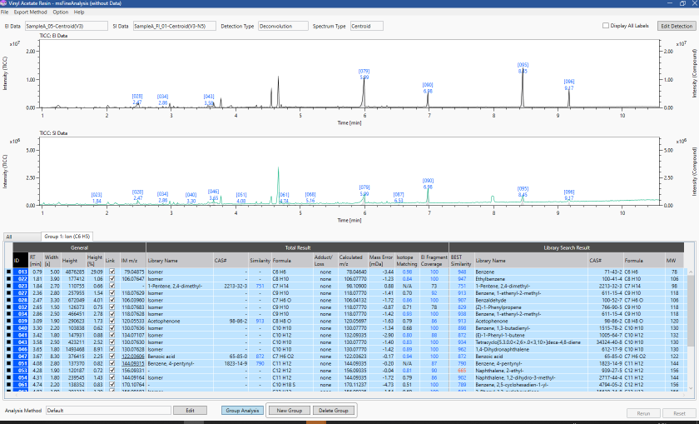 Figure 2 shows the extracted results for components containing C6H5+. The Group Analysis function displays an “All” tab for the entire analysis results and up to 5 tabs for groups created for ions or neutral losses specified from the exact mass list in Figure 1. For example, the operator can select a fragment ion containing nitrogen, phosphate, or sulfur to find a group of compounds containing the specified elements. The ID and integrated analysis results are then shared between tabs. The results under the C6H5 tab represent a group of aromatic compounds.

The msFineAnalysis program is designed to run integrated analysis with or without library search. It is a qualitative program based on a new concept that is effective for non-targeted analysis. The basic functions of the program are capable of identifying numerous components for non-targeted analysis. Group Analysis adds the capability to extract specific compounds or families of related compounds in the same manner as target analysis, speeding up the process of their detailed analysis.