The power of exact mass measurement: an example of unknown compound identification

Recently, JEOL introduced AccuTOF™-GC, an innovative GC/time-of-flight MS system capable of both high data acquisition rate and easy exact mass measurement. Exact mass measurements can be used to generate lists of possible elemental compositions, a powerful tool for the identification of unknown compounds. Combining elemental composition and fragmentation information with other information can identify an unknown compound. This note describes the application of the AccuTOF™ GC for the identification of an unknown compound in liquid crystal extract.

The system consisted of an Agilent 6890N GC and a JEOL AccuTOF™ GC time-of-flight mass spectrometer. Liquid crystal in a pocket calculator display was dissolved in hexane and was injected onto a DB-5 GC column (0.18mm x 10m, 0.18µm film thickness). The oven temperature was held at 40°C for 1 min and increased to 300°C at 50°C/min rate. The time-of-flight mass spectrometer was tuned to achieve resolution of 5,000 (FWHM) at m/z 293 (Perfluorokerosene). 2,4,6-tris(trifluoromethyl)-1,3,5-triazine was used as internal standard for exact mass measurement in both EI and CI modes. The CI reagent gas was isobutane. The NIST mass spectral database (2002) was used for EI spectrum searches.

Figure 1 shows the total ion chromatograms (TIC) for liquid crystal extract in both EI and CI modes. Most peaks in the TIC can be identified by NIST library search for their EI spectra except the last peak (marked with an asterisk). Both EI and CI spectra for this compound are shown in Figure 2. The base peak at m/z 334 was observed in its CI spectra and a small peak of m/z 333 in the EI spectra, indicating the molecular weight for this compound is 333. The NIST library search for the EI spectrum yielded a very low matching score and no match had a molecular weight of 333. It is likely that this compound is not in the current version of NIST library database. To identify this unknown compound, we used an exact mass measurement to generate a list of the possible elemental compositions for each ion. Based on the typical liquid crystal compound structures listed on book "Liquid Crystal Compound Glossary"
, only C, H, O, N, and F were included in the elemental composition calculation. The AccuTOF™ GC can measure mass with an error smaller than 2 mmu. All possible compositions for each ion within a 2 mmu tolerance are listed on Table 1.

Let us first consider the No.2 composition C19H25FNO3 of [M+H]+ ion. Compounds having three oxygen atoms are limited to azoxy compounds and p-cyano-phenyl-ester compounds with p-alkyl substitution of benzoic acid. However, none of these compounds containing a fluorine atom has been reported[1]. Therefore the elemental composition was assigned as the first composition, C22H24NO2. It is known that there is no compound having -NH2 or -NO2 groups in the liquid crystal compound family[1]. So, one nitrogen atom in this composition has to be in the form of –CN. The first composition also has two oxygen atoms, assigned as an ester. In addition, the unsaturation number for [M+H]+ is 11.5. There must be at least one or two benzene rings in the structure. Based on all of these estimations and the typical liquid crystal compounds listed in "Liquid Crystal Compound Glossary"[1], two possible structures for this compound are shown in Figure 3.
To figure out which structure is likely, consider the 3 major fragment ions, m/z 69, 111, and 195 in the EI spectra. The ion at m/z 111 is possibly formed by a simple cleavage of alkyl group and m/z 69, a cleavage with hydrogen transfer in cyclohexane ring. These two fragment ions can be formed from both structures I and II. However, m/z 195 can only be formed by a simple cleavage of the alkoxy group with hydrogen transfer in structure I. Thus, the most possible structure for this unknown compound is structure I. 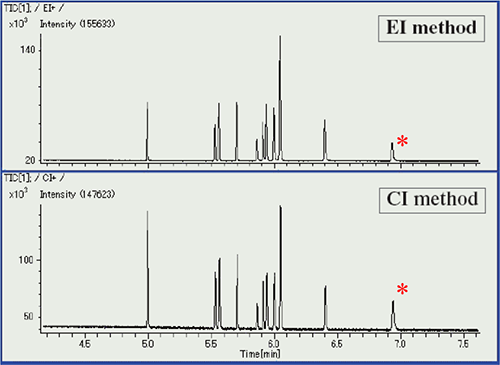 Fig.1 TIC of liquid crystal extract in both EI and CI modes 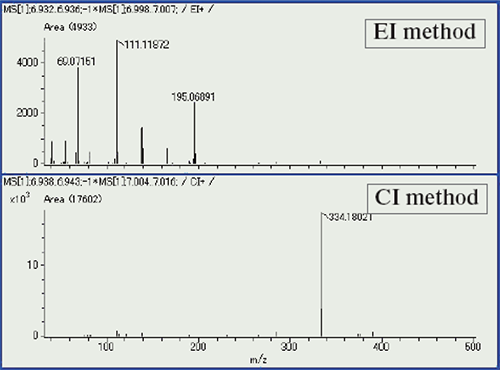 Fig.2 Mass spectra for the unknown compound marked with an asterisk (*) in Fig.1. 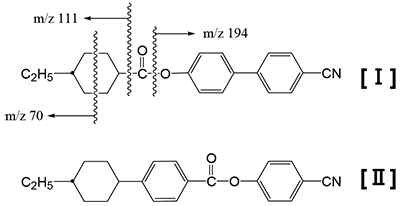 Exact mass measurements and a knowledge of the chemistry of liquid crystals were used to determine the structure of an unknown compound that was not identified by library search.