Matrix-assisted laser desorption ionization (MALDI) uses low-molecular-weight (LMW) compounds called matrices to enhance ionization efficiency. MALDI is often used in combination with a reflectron time-of-flight mass spectrometer (TOF-MS), but measuring LMW organic compounds with m/z 500 with this technique is generally considered difficult. First, not only the target compound but also the matrix and other contaminating components are ionized and observed in the mass spectrum, and insufficient mass resolution makes it difficult to separate these peaks when using reflectron-type TOF-MS. Second, post-source decay (PSD) ions are also observed as background ions in low-mass regions of mass spectra.

The JMS-S3000 SpiralTOF™, which has a JEOL-patented spiral orbital ion optical system, has a long-flight distance of 17 m and can achieve high-mass resolution. In addition, the electrostatic sectors that constitute the ion optical system can exclude PSD ions, making it possible to acquire a mass spectrum that is less affected by background ions. These features enable accurate mass measurement even in LMW regions[1].

LMW compounds similar in structure to the target compound are often also analyzed using MS/MS and imaging mass spectrometry[2]. When SpiralTOF™ is used with the TOF-TOF option, the user can select only monoisotopic ions of precursor ions via high-mass selectivity and observe informative fragmentation channels using high-energy–collision induced dissociation (HE-CID). In this Applications Note, we report on MS/MS analysis of melatonin, its metabolite 5-methoxytryptamine, and N-acetylserotonin, which is a synthetic intermediate of melatonin from serotonin.

In this analysis we used the standard reagents of melatonin, 5-methoxytryptamine, and N-acetylserotonin (Figure 1), preparing each as a 1 mg/mL methanol solution. For a matrix, we used 2,5-hydroxybenzoic acid (DHB) dissolved in methanol. The sample and matrix solutions were mixed at 1: v/v. We dropped 1 μL of mixed solution onto the target plate and allowed it to air dry. Product ion spectra were acquired using TOF-TOF positive ion mode.

It is possible to analyze similar structures of different LMW compounds by analyzing the HE-CID product ion spectra obtained using SpiralTOF™ with the TOF-TOF option. Using this technique, we analyzed the terminal portion of melatonin and related compounds. 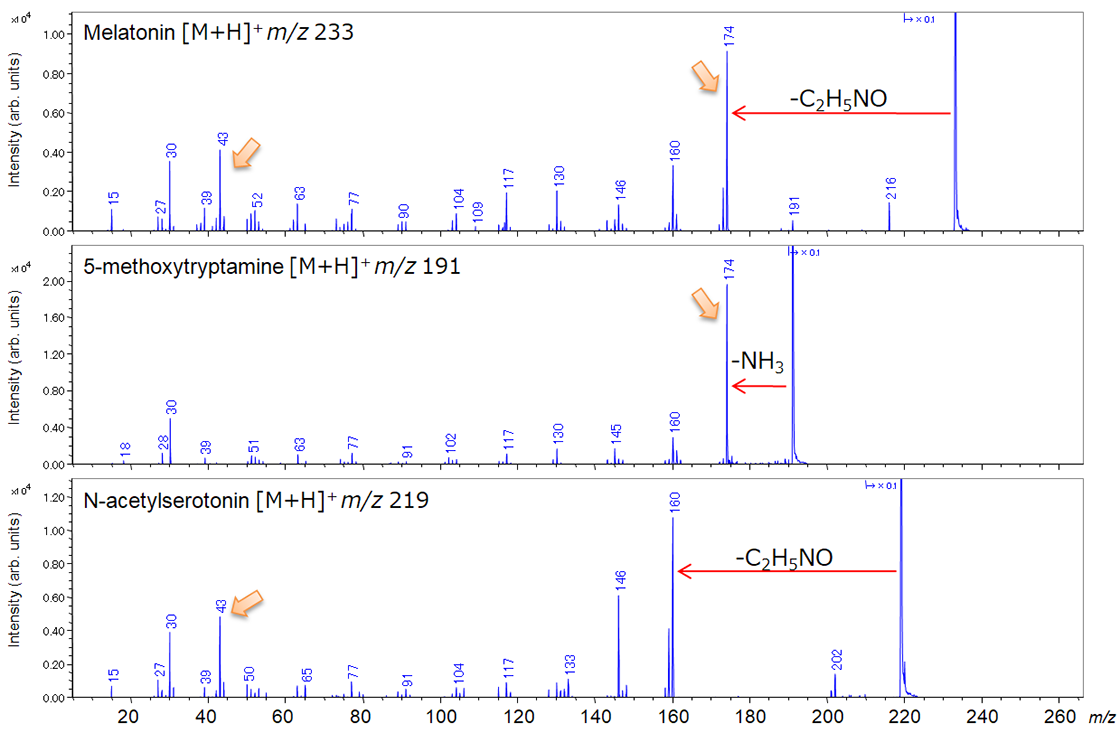